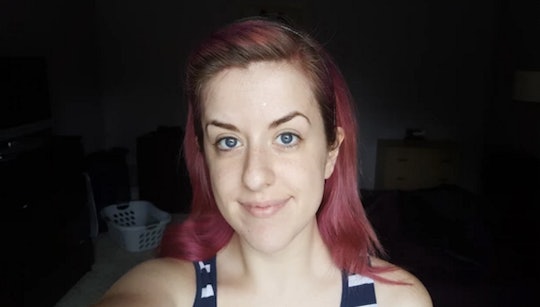 I Drank More Water Than I Ever Have For A Week, & Here's How It Went

Perhaps the years of eating ramen and Taco Bell in college have finally caught up to me. Or maybe it has something to do with the fact a small human depends on me being alive. Either way, I’ve begun to take stock of my health habits — or rather, the distinct lack thereof. I came across Maxine Builder's Bustle post about drinking 96 ounces of water a day for one week and saw that she noticed some pretty phenomenal results. I'm not much of a water drinker, to be totally honest. I like water, and I encourage my son to drink it around every turn, but I'm just not that into it. After reading about the benefits of water for your overall health, your skin, and your mood, I wondered what mystical fountain of youth I was missing out on.

In general, my daily diet consists mostly of eating my kid’s leftovers, hiding in the closet to eat a cookie, and simply forgetting to eat three square meals a day. (I’m lucky if I remember to eat one.) As my son nears an age where he’ll be more and more aware of what I do and don’t do, I figured my dependency on caffeine probably wasn’t a good message to send to his sponge-like brain. I vaguely knew that there were benefits to drinking water, but my frazzled mind never paid too much attention to them.

After reading that drinking water maintains your body’s fluids (which are apparently “important,” who knew?!) and can even improve your skin, I was sold. So I embarked on my journey of hydration all while worrying about how often I’d have to pee. I'd give it a week and aim to take in 96 ounces of water each day. Was it an adventurous goal? Hell yeah, but I was game.

Day 1: Harder Than I Thought

To the dismay of my environmentally conscious partner, I picked up a gallon jug of water at the store, and in an effort to not completely make the ocean cry, I decided to refill the same jug at the end of each day. The same overwhelming, giant jug, which, funnily enough, didn’t seem so daunting in size when I was at the grocery store was now staring back at me from my kitchen counter. I was only a few hours into day one and I was astonished by how little I had actually consumed.

I was inspired by a post on Pinterest where someone had written out a drinking schedule on the jug. It seemed simple enough at the time. “OK," I told myself, "I’ll just break it up into two hour chunks and this should be easy!” Oh, how naïve I was.

I couldn’t believe how difficult it was to not only work this into my schedule, but also make the time for the extremely necessary pee breaks. I actually had a couple of very close calls on day one that reminded me of pregnancy.

I was hoping to wake up on day two feeling energized and glowing. And I did wake up — several times — in the middle of the night to pee. Since my nearly-2-year-old son still doesn’t consistently sleep through the night, this actually didn’t interfere too much with my normal schedule. But when it’s dead quiet and your child is asleep, any noise you make is amplified at an astonishing level. It’s science. It’s also the one thing that terrifies the sh*t out of moms. So my frequent trips to the restroom had me tiptoeing with my legs crossed in restraint. I thought to myself, if I was only barely into day two, how the hell was I going to make it a whole week?

Midway through the day, maybe an hour or so before I had to pick up my son from daycare, I realized that I had made it four hours without really thinking about drinking water. On day one, it was a conscious effort where I forced myself to drink the predetermined amount every time my timer went off. Don’t get me wrong, I wasn’t downing the massive gulps of water with ease. It just wasn’t quite the struggle day one had been.

Slowly but surely, I was willing myself to be more positive about drinking water non-stop. Although I was proud of myself for drinking the full amount every day, I was beginning to notice just how addicted I was to my sugary drinks. I’m pretty sure if you had tested my blood on day one, it would’ve been 85 percent Dr. Pepper. But the further along in the experiment I got, the more clarity I gained on my motivation. I wanted to set a better example of healthy habits for my son. After all, how would I be able to justify denying him soda if he saw me guzzling it at every turn? The cravings for soda were still there, but I had a stronger sense of determination.

Later that evening as I was trying to power through my water, my son crawled up on the couch next to me with his sippy cup of water. He looked up at me and exclaimed, “Water!” Then he chugged, smacked his lips, and let out a satisfied “ahh!” It was adorable and hilarious, and made me realize that I was starting to be a good influence after all!

Day 4: Mirror, Mirror On The Wall…

Officially past the halfway point, I started to do a preliminary reflection on my experiment so far. I knew not to expect magic as far as my looks went, but I was excited to see if there was any kind of noticeable difference in my appearance. At the start of the week, I was rocking a pretty awful zit and was really hopeful all the water would work wonders. I’m not sure if my accumulated karma was finally got cashed in, but lo and behold, my blemish was reduced to an easy-to-conceal red spot!

Prior to day one, I was super stoked about the aesthetic benefits to drinking water. Not to say that I wasn’t thrilled with a clearer complexion, but after the previous night’s parental self esteem-boosting moment, things shifted. I felt such a high from being the kind of role model I was always afraid was beyond my reach. With my multiple chronic illnesses, good health is rarely in my control. So I’d already resigned myself to the fact that I wouldn’t necessarily look like or be able to do all the same things as a “normal” mom. But seeing my son copy my good habits truly inspired me to take more ownership and focus less on my limitations.

As I’m sure any parent or guardian out there knows, things like showering and peeing are straight-up luxuries. Now that my son is two inches shy of being 3 feet, doorknobs don’t pose quite the same challenge they once did. So he frequently makes unannounced entrances at the most inopportune times. And yes, Mom, if you’re reading this, I’ll read up on those child-lock articles you’ve been telling me about.

On day five, I attempted to do something I’ve previously scolded my husband for many, many times: In the spirit of being green and saving water, I decided to multitask and let the shower drain pull double duty. Big mistake. After drinking so much water and having a child, my bladder control (despite Kegels) is just not on point anymore. Just like with potato chips, once you start you just can’t stop. So when my son came in to show me how many strawberries he could fit in his cheeks and promptly began gagging and puking on the bathroom rug, I couldn’t exactly just hop out to direct his vomit elsewhere. Yup, that’s my lovely bath mat stained with strawberry puke even after a wash.

Note to self: peeing in the shower is best left to the experts.

I inconveniently got my period on day six. My Lady Time, as I so maturely call it, can be a real jerk. I’d been thinking that I was carrying around some extra water weight because of the challenge, but Aunt Flo was more likely the culprit. Since I have PMDD, headaches and cramps can really suck. Perhaps it was a fluke, but it felt like my headaches weren’t quite as severe this time.

My husband usually calls me out on my lack of hydration, in fact, so turns out he may have been right all along. Just don’t tell him that.

I was obviously thrilled to be done and free from the strict regimen, but I was equally happy with how well it went. I began this experiment with somewhat high hopes and an ambition to change my health habits for the better. By day seven, I was pretty satisfied with how easy it had gotten to incorporate more water into my day. I also really liked how it had made me more aware of the choices I was making, too.

My face seemed less oily when I woke up and my skin seemed fuller and clearer. I also felt like I had more stamina throughout the day. Usually, after lunch, I hit a bit of a slump. That’s probably due to my dependency on soda and caffeine. Since I had significantly reduced my soda intake throughout the week, by day seven I wasn’t really feeling sluggish in the afternoon anymore. Obviously, as a parent of an energetic toddler, I could still go for a nap at the drop of a hat, but it seemed my water intake did help me maintain my energy levels better.

Although there were times when those last few ounces seemed to be too much, I shocked myself by never missing a day. In the beginning I had even thought to myself it wouldn’t be so bad if I didn’t finish the water every single time. But I like challenges — especially ones where I have something to prove to myself. I set out wanting to improve my health habits and see what benefits, if any, I’d experience.

The benefits of having a clearer complexion and avoiding the sharp energy crash from sugar were both surprising and welcomed. Yet the biggest and most valuable result of this experiment was how mindful I’d become with my choices. Now more than ever, I know I have two little eyes watching my every move, and I’m determined to lead by example.