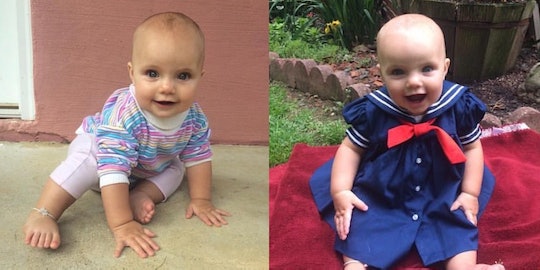 Maybe it's because the Netflix spinoff Fuller House didn't satisfy my nostalgia for one of the most popular TV babies ever, or maybe it's because since having a baby of my own I love the Michelle Tanner character even more, but I unashamedly dressed my baby like Michelle Tanner with five retro outfits from the late '80s and early '90s. And I'm not going to lie: I loved every second of it.

Mary Kate and Ashley Olsen were just 9 months old when they starting filming as the charming third daughter in the famous sitcom Full House. My daughter is 8 months old and incredibly animated, so I felt she was the perfect candidate to give her my own Michelle Tanner makeover. I have memories of growing up and watching Full House on ABC's TGIF Friday evening program every week. As a kid, I identified most with Stephanie Tanner because she was closer to my age, but as a mom with an infant daughter, I can't help but to zone in on Michelle Tanner's character when I watch reruns of the show.

And it's not just the character that I love. It's the clothes. All of the clothes. I get major flashbacks to my own childhood fashion every time I watch an epsiode. That frilly pink polka dotted matching shirt and pants set from 1994 that I wore in the fifth grade? Cringe-worthy in the raddest way. That's why I was eager to try out what we might now call "tacky" '90s fashion on my daughter: even if the styles are a little wild, they are brilliant if just for their nostalgia. Like, totally. For sure.

I decided I'd get a few ideas of outfits from Season 1 of Full House when Michelle Tanner is closer to my daughter's age. The show first ran in 1987, so Michelle's baby clothes are not too far from what my own baby clothes looked like as I was born in 1984. So seeing what my own child — my mini me —would look like in clothes from my baby era peaked my interest. My goal was not to recreate exact outfits Michelle wore (because I'm not sure that'd be possible) but to dress my daughter in clothes that felt very similar to get a general Michelle Tanner vibe. I went online and bought actual vintage pieces of clothing from Etsy and eBay.

The first day, I dressed her in this Healthtex brand sweater. When I found it on Etsy, I eyed it as something I'd totally want to wear even now as an adult. It sort of has a hipster quality to it, I think.

Seeing her in the pretty pastel stripes and even the way it was made around the neck and the cuffs gave me flashbacks to photos I've grown up seeing of when I was a baby. There's something about the simple, thin horizontal lines that just scream retro to me. At first, I thought the neck might be hard to put over my daughter's head or that the semi-turtle neck would bother her, but it went on fine, and she didn't seem annoyed.

One of my friends we saw that day said there was only way to describe this outfit: "hideously adorable." Spot on, I think.

We went grocery shopping that day, and since no one said anything particular about her top, I started to think that maybe people wouldn't even notice the retro vibe she had going on. Nevertheless, I was still enamored with the look, and now it'll always be a special outfit as she literally starting crawling for the first time in it. Yep, I think her newfound movement clearly expresses her enthusiasm for my Full House nostalgia.

This rad sweat shirt features an old school telephone and speech bubble, which took me back to the days when we actually called each other from our houses. On a landline. With a cord. I mean, can you even get any more '90s than that? I combined it with a really sweet pair of denim suspender overalls, just like each of the Tanner girls in pretty much every episode.

I loved my daughter in this outfit and just adore the suspenders. But those suckers were pretty annoying when it came diaper-change time. It wasn't just unfastening the little buttons in order to pull the pants down, but every time I put them back over her, she was all to0 eager to play with the straps, making refastening the buttons a mini ordeal.

We went over to a friend's house that morning and she commented on how cute my daughter's outfit was, but when I told her it was actually from the '90s and not just inspired by it, she said she would've never known. I was a little disappointed, because hello! major '90s baby cuteness (not to mention the all but extinct landline phone). But I suppose all baby clothes are adorbable, so the aesthetic can get lost in the charm of infancy. We saw my mom that day, too, though, and she was ecstatic about the outfit and loved seeing her granddaughter in clothes she could have easily dressed me as her daughter in. "It takes me back to being a young mother," she said. "I love the flamboyant styles, the floral patterns, and the pastels."

I'm pretty sure this was my favorite outfit of all from this experiment. It's just so amazingly '90s: from the puffy sleeves and quasi parachute pants, to the floral-and-polka-dot pattern, to the tie-in-the-back belt. It's frilly, super girly, and absolutely over the top. One of my friends we saw that day said there was only way to describe this outfit: "hideously adorable." Spot on, I think.

The Peter Pan collar and perfectly sweet pink-ness of this outfit completely reminded me of Michelle Tanner. All I needed was a bow (too bad my daughter's hair hasn't come in fully yet) to complete the look.

When my daughter was in this outfit, however, I realized she was getting far more compliments on her retro-inspired clothes than on, say, her smile or her eyes like she usually does. Whether it was because they're obviously from a different era or because they are intrinsically more eye-catching than a simple onesie, I'm not sure. But these clothes were definitely more attention-grabbing than any of the other things I typically put on my girl. I found it interesting that given a little flare, clothes often become the focus of a child's disposition.

Another thing about this look was that the material needed to be ironed before I put it on her. I happened to be visiting my grandmother the morning I dressed her in this outfit, so I went all out and ironed it with an actual iron she still had from the '80s. Using it, I'm pretty sure I literally stepped back in time. Ironing is not my favorite thing, and it's not something I have tons of time for, so that was already a hassle, and as much as I loved this outfit, the blouse kept riding up my daughter's back through the day and I was constantly tucking it back in. I was just grateful there were snap buttons on the pant legs, which made diaper changes that much easier.

A sailor dress is a classic that many baby girls from the '90s were dressed in — and they seem to never go out of style. But if I recall correctly, there was a definite surge of popularity in them in the '90s. I remember seeing Michelle Tanner in at least three different versions of a sailor dress in the show in probably just one season.

I chose a sailor dress for this experiment because it is such a classic look, and if there's one thing about the Michelle Tanner character, she always represented to me the innocence of childhood and how a child can bring such life and fun into your world. There's something about a vintage look like this one that brings out that timeless truth.

Everyone who saw my daughter that day commented on how sweet she looked in this dress. It was an absolute hit, especially because it happened to be Memorial Day weekend when she wore it, so it fit nicely with the red, white, and blue-themed decorations and sentiment. This was certainly the easiest of the outfits to get her in and remained the most functional piece she wore in this experiment. No matter the decade, this one is a total winner.

The last outfit I bought and dressed her in was a homage to all the athletic wear that was so popular in the '90s. Windbreakers, anyone? The '90s had the athleisure trend down way before the term was made popular circa 2013. The color of this little velour sweatsuit also reminded me so much of the kind of clothes I see in my own baby photos. But perhaps this style was a bit too subtle and still popular today, since no one pointed out her old school style the day she wore this outfit.

The inspiration for this outfit was the famous "Michelle's first workout" scene.

A baby on the move deserves some comfortable clothes to get moving in. Plus, this outfit (and hoodies in general) was great for some serious cuddles.

Babies Can Rock Anything

No matter what I put my daughter in throughout this experiment, she still looked positively adorable — but perhaps that's just my own bias. We'll find out if years down the road, when she sees these photos, she gasps in despair over how I made her look. I hope she can see the fun in a little vintage styling, because I sure enjoyed seeing her in these tacky, yet totally rad get-ups.

Since the show was such a staple in my life, I'm sure as my daughter grows up she'll be introduced to the show. She's already "watched" Fuller House episodes with me. I'm looking forward to showing her when she's older how I styled her after Michelle Tanner for a week. After this week, I'd say Michelle Tanner wasn't just a TV icon for her adorable infant antics. She was a major influence on babies' fashion in the '90s, and apparently, she's still setting trends for at least one baby girl in 2016.

This article was originally published on June 3, 2016