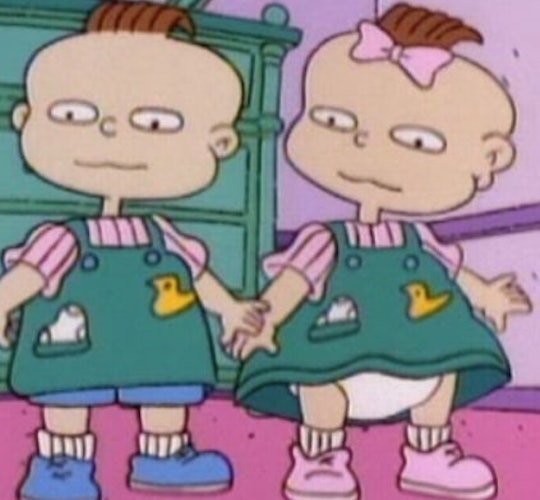 If Nickelodeon cartoons were your jam back when you were a kid (and weren't they for everyone?) then you probably remember Tommy Pickles, Chuckie Finster, and Phil and Lil DeVille, also known as the Rugrats. This diaper-clad bunch, joined occasionally by Tommy's cousin Angelica and her most favorite doll, Cynthia, had grand adventures, which often happened without any of the grown-ups ever being aware that the children had left the playpen.

More Like This
28 Subscription Boxes For Every Kind Of Kid
Vaccinated People Can Ditch Masks. Where Does That Leave Kids?
Moms To Toddlers Everywhere: This Aggression Will Not Stand, Man
Pregnant Olympian Shawn Johnson Cried When Her Daughter Was Sad At Drop-Off

Even as a kid slurping up my Saturday morning bowl of delectable Rice Krispies Treats Cereal I was a bit skeptical over the entire Rugrats premise. Those babies were left to their own devices for long stretches of time and got along far better than I ever did with my sister and little cousins. Still, I adored the show from its very first episode right up until the feature film release, but I especially loved the twins, Phil and Lil.

The DeVille twins were nearly always on the same page on how to approach a problem and I loved how they wore matching outfits even though they were different sexes. When I found out I was pregnant with twins, I even joked that Philip and Lillian would make great names, but alas we had two boys, and Tommy and Chuckie didn't have quite the same ring to them. But as I was watching Dora the Explorer with my 3-year-old boys the other day and thinking about how Rugrats was a far superior show, I had a thought. Sure, I couldn't name my twins after the Rugrats, but that didn't mean I couldn't dress them that way.

I scoured the mall to find outfits that looked like Phil and Lil's, but there was nary a duckie tunic to be found, so I did the best I could with some green tunics and hit up the craft store for some yellow felt and buttons. I found purple shirts and blue shorts like the ones that Phil and Lil wore and ta da! cartoon characters come to life.

I decided I'd try to have the boys wear the outfit for a full week to see if people recognized the inspiration for their look, to keep track of how people reacted, and to see how the boys felt about being in what's essentially a dress for the first time. Here's what happened.

Day 1: Crafting Is Harder Than It Looks

I had planned on making the boys' outfits during Game of Thrones so we would be ready to put them on first thing Monday morning, but then (spoiler alert!) Sansa finally met up with Jon and suddenly I couldn't possibly concentrate on sewing while watching TV. I spent the bulk of Monday trying to squeeze in a couple moments to sew a button here or trace and cut a felt duck there, but it was only a few minutes before the boys' bedtime when I finally finished.

I know Betty, Phil and Lil's mom in the cartoon, was a force to be reckoned when it came to running her business, making her feminist comments, and her impressive workout regime, but I find it hard to believe she found time to sew her kids' clothes as well. Or maybe she was "that mom" who managed to make parenting look effortless. OK, perhaps I'm reading far too much into a fictional character, but point being I did the best I could with what time I had as a mom and I feel bad that it took me so long to make the outfits.

Whenever the boys saw me working on the outfits during the day they asked to put them on, but when the moment finally arrived, only Lolo was up for a costume change. Three minutes later I told him he had to take it off for his bath, and he sobbed. This experiment is not going at all how I thought it would.

Day two was a new day, and we started it off right by putting on the outfits. I thought they looked pretty close to Phil and Lil, so I took a picture and sent it to a couple friends who were also big Rugrats fans. I didn't add a caption, hoping they would see what I had done without needing to be prompted. One of them got it right away and the other wanted to know why the boys were wearing period costumes from the 1800s. Therefore, it was with great trepidation that I took them to the grocery store.

The store wasn't crowded, but I didn't notice anyone giving the boys strange looks for wearing such colorful and clearly handmade outfits. The cashier remarked on the ducks on their shirts and when the kids said, "Rugrats!" she busted out laughing and told me I was awesome, so I know which checkout lane I'll be headed to from now on.

Phil and Lil nearly always got along. Sometimes they even seemed to have ESP, climbing on each other to reach a forbidden object without having to say a word. My boys have moments when they love each other, but in general, every hour of every day is a power struggle for the better-colored sippy cup, the best toy, or who gets to plunk themselves in my lap. Maybe it's a coincidence, but ever since I started putting the boys in the Phil and Lil outfit, they seemed to be getting along better.

I used to always dress the boys alike, but as they've gotten older, I've started grabbing whichever two shirts are on top in their drawer and dressing them in those. Maybe the secret to less sibling rivalry is going back to matching clothes?

I didn't really think about it when I was a kid watching the show, but even though Phil is a boy, the outfit he and his sister wear is pretty feminine. Apart from Phil's blue shorts and Lil's pink bow (which Phil would often grab and stick in his own hair to impersonate his sister) they're both essentially wearing what we'd call a dress.

I like to consider myself open minded and if either of my boys said they wanted to wear a dress, then I'd be all for it, but after the first day when Remy wasn't crazy about the green tunic, he spent the rest of the week quickly pulling it off unless I begged him to leave it on. I was happy to find out that I could put my money where my mouth was, however, because Lolo loved the tunic and called it "his dress," and seeing him happy in it made me happy, so I knew that I wasn't just giving lip service to the idea of loving my child exactly how he is (though since this experiment has ended he hasn't asked to wear the tunic again).

Aside from our grocery run and the Starbucks drive-thru, we'd yet to go anywhere or run into anyone where I was worried about what people might think of seeing two boys in dresses — until today. When the new neighbor paused on his walk in front of our house to come over and introduce himself, I'll admit I was nervous about what he would think of my boys in their Phil and Lil costumes. He was polite enough not to mention their clothes and I didn't bring it up either, but I still wonder if noticed them and what he thought.

Phil and Lil were always climbing and crawling, and even though they're two-dimensional, I can vouch for these outfits as being fantastic play clothes. Usually I stress out over putting the boys in nice clothes if I know they might get muddy or if they spill I spring into immediate action to try and prevent their clothes from getting stained. Since I knew these outfits were just for the week, I was able to relax a bit. I know some famous executives, Jenna Lyons of J.Crew for example, wear the same outfit everyday to simplify their lives but there may be a missed opportunity for doing the same thing with your kids. When every shirt is the same, you're not worried about one getting covered in fingerpaint.

Is Having Twins More Fun When They're Dressed Like Rugrats?

By the end of day five, Remy was flat-out refusing to wear his tunic, and I didn't want to force him to. Plus, Lolo's yellow duck was long gone on the playground somewhere and his outfit really needed to be washed. I know it's probably not what Betty Deville would do, but I called it quits, happy we made it as far as we did.

It was cool dressing my kids as characters that made my childhood tons of fun, but at the end of the day, it felt like Halloween. My kids are who they are and putting them in a costume didn't change that, but it did yield some pretty epic pictures.