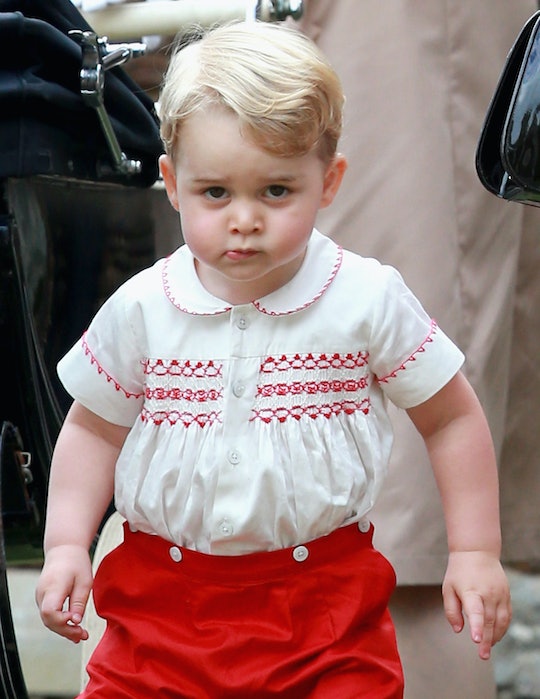 Plenty of celebrity kids are known for their distinctive sense of fashion, but no one rocks a gingham romper quite like Prince George. With a style icon like Kate Middleton for a mom, it's no wonder Prince George always looks great, but I've also noticed that he seems to be a pretty calm little kid. As a parent, I couldn't help but wonder if his wardrobe is part of the secret behind his totally chill toddler demeanor.

My own kids have a personal style that I refer to as "cartoon character tops meets whatever other t-shirts were on sale and shorts with no buttons or zippers." Honestly, the only thing that separates my sons' daily clothing from pajamas is the fact that they're sold in separate sections of the store. But my boys are due to start preschool in the fall (*sobs*) and I don't want them to look a fright when they go, so I thought Prince George might make an excellent fashion role model for them. Plus, perhaps some of the prince's zen would transfer to my own kids if they wore the same kind of clothes. (Hey, I can dream, OK?)

I dug through boxes of hand-me-downs and hit up the mall to put together some outfits influenced by the future King of England. Would dressing like royalty turn my kids into perfect little princes? At the very least, I figured a dose of royalty would go a long way for my boys. (And for me.) And here's what happened.

I'm not quite sure why the royal children's lower limbs seem to be permanently stuck in 1941 while the rest of their bodies are here in 2016, but for whatever reason Prince George is often seen rocking twee little knee socks. My boys are creatures of habit and I wasn't quite sure how they would react to their new wardrobe, so I thought socks were a good place to start, since it's just one article of clothing.

My boys thought that because the socks were long they were a substitute for pants, so sadly we didn't get to leave the house this day.

I couldn't find them in stores, but I remembered my dad had given me these Mickey Mouse socks for the boys that were too big at the time, so I braved the ghost in the basement (that's a different story) and dug them out.

Growing up, I always felt like the clothes my grandparents gave me were gifted with good intentions but were out of style, and it looks like my dad is going to be that grandpa. Even with a Mickey on the side, I wasn't a fan of these socks. Even though I personally thought these were socks only a heir to the throne of England or a retiree who enjoys golfing and playing bridge could love, my boys shockingly loved them too (the Mickey Mouse on them helped).

I knew Prince George would never lower himself to the summer footwear of American preschoolers by wearing Crocs, however, I managed to find a pair of shoes that weren't light up and covered in Star Wars characters to match the socks.

The socks weren't completely horrible I suppose, and I could see where they might come in handy when you're an accident-prone kid running through the grass so you've got an extra layer of protection covering the royal shins. Funnily enough, my boys thought that because the socks were long they were a substitute for pants, so sadly we didn't get to leave the house this day. The retirees who live in the condos on either side of us thought the boys' socks were "precious," so if you're headed to visit great-grandma and want to make her happy, grab a pair.

Prince George is often photographed wearing structured knitted cardigans, a look that I think is adorable, but I've always passed on with my own kids because if it can't get tossed in the washing machine then I don't want it our closets. But this experiment was the perfect excuse to throw my practical side to the wind and put the boys in these adorable sweaters.

Maybe Lolo and Remy were better behaved this day than usual, but I swear I had more patience with them when they were wearing these sweaters. I love their usual graphic T's, but those are admittedly childish looking, so perhaps seeing them dressed as miniature adults meant I treated them more like one.

I usually leave the house in a pair of gym capris and a tank top with my hair in a messy ponytail, but I found myself wanting to dress better because my kids were dressed better. Maybe this is why Kate Middleton always looks so put together.

I was starting to rethink my "casual clothing only" approach when we sat down for dinner. The kids only had a couple bites of pasta with red sauce each before I remembered what they were wearing, but the damage had already been done. My husband said that judging by my reaction he thought the kids had been shot rather than eating dinner, but I really wanted to get more than one wear out of those sweaters before they got stained. I'm guessing Prince George has a gold bib or someone who feeds him because royal or not, all preschoolers are going to make a mess of their shirts while eating red sauce. Fingers crossed that my detergent works a miracle.

You can't wear British-inspired clothing without donning a polo shirt. My partner basically lives in polos, so he was really excited to pick out some shirts for the kids so they could share his style. And I was surprised at how much I love this look and how low maintenance it was. Polos are just as casual and as easy to care for as t-shirts, but they look far more put together.

I usually leave the house in a pair of gym capris and a tank top with my hair in a messy ponytail, but I found myself wanting to dress better because my kids were dressed better. Maybe this is why Kate Middleton always looks so put together. Luckily they're in season now, so I'm hoping to scoop up a few more, and maybe, just maybe, a matching father/sons set.

Maybe it's unconscious, but I suspect seeing smartly dressed kids bouncing around in public has more to do with society's views on privilege and the assumptions we make when a family is dressed nicely versus not.

We all lost it over the picture of Prince George all ready for bed and rocking a robe while saying good night to President Obama and the First Lady. He looked angelic and adorable and not at all ready to demand 17 stories in a row and a drink of water and a double do-over on the tucking in of his blankets because they made his feet feel " like smushed bananas," like my sons do. The only place I could find a kid's robe was online (dear Target, why has thou forsaken me?) so that probably should have been clue number one that I was building this up way to much, but I clicked purchase anyway and waited eagerly for the Amazon box to arrive.

Did my kids love the robe? Yes. Did it instantly lend them an air of maturity and sophistication like I had hoped? Not even close. Instead of the robe calming them down after bath time, they took turns wearing it and stumbling over its hem around the room. I was tempted to put on "Eye of the Tiger" and start calling them both Rocky. While it wasn't the relaxing snuggled up story time I'd hoped for, it was ridiculously adorable so I ordered a second robe, which should arrive in a couple days.

After I realized getting food on their clothes wasn't the end of the world, I was pretty pumped to see how the boys would look in a sweater vest. The end result was decidedly less Prince George and more Chandler Bing, but TBH I'm not mad at that.

My partner and I dressed up too and we took the kids out for dinner, where I confirmed a suspicion that had been brewing all week: strangers were definitely more tolerant of the kids when they were dressed like Prince George. When I let them come with me to the store wearing their pajama bottoms and a shirt with a giant popsicle stain on it, people are decidedly less amused.

There's the saying "never judge a book by it's cover," but people also use the phrase, "first impressions are last impressions," and sadly I think the latter is true when it comes to kids. Maybe it's unconscious, but I suspect seeing smartly dressed kids bouncing around in public has more to do with society's views on privilege and the assumptions we make when a family is dressed nicely versus not. My kids are pretty well-behaved anyway, but all week long if they shouted at each other while siting in the grocery cart or got a little hyper while waiting for food, they seemed to be met with more tolerance by those around us when they were better dressed.

Was Dressing My Kids Like Prince George The Royal Success I'd Hoped It'd Be?

Dressing my boys like Prince George didn't change their behavior, but it did seem to alter how other people looked at them. It also made me realize that whether I like it or not, appearances matter. Luckily fancying up their daily outfits doesn't require a lot of extra effort, and I know it's certainly a privilege to admit that. As long as we steer clear of the knee socks and stick with polo shirts and sweaters, I can easily have the boys look a bit more polished. And the biggest benefit of those little changes to their wardrobe is the fact that they can still be comfortable.

We'll never be royals (it doesn't run in our blood), but that doesn't mean we can't dress like them.