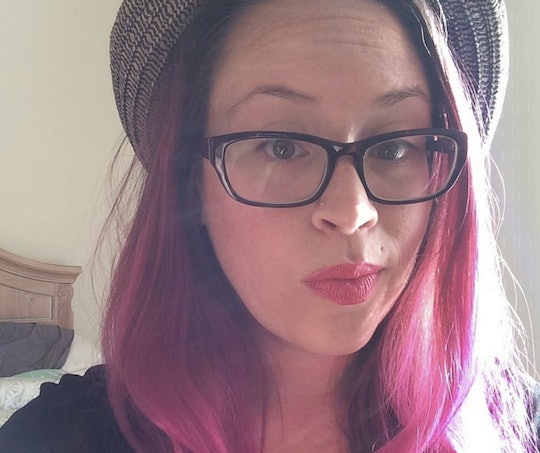 I Dyed My Hair Bright Pink, & This Is How People Reacted

A few months ago, I came across one of my favorite pictures from my teenage years. Back in the day, I used to be cool. I was obsessed with punk rock music and my queen idol was none other than Gwen Stefani. I was in high school during No Doubt’s Return of Saturn album and her corresponding pink-hair era that followed. I was also on the cusp of setting off for the military as soon as I graduated. I decided to dye my hair all the colors of the rainbow, ending the year and my graduation in a grand hot pink finale. My friends loved it, and the adults in my life hated it, naturally. The dean of my school even went so far as to tell me that I couldn’t walk in my graduation ceremony unless I got rid of it. (Let’s just say that he didn’t get his way.)

Looking back on those photos made me miss my rainbow-hued hair. These days, as a 31-year-old stay-at-home mom, I’ve been rocking the same neutral-colored ombre for a few years. Even though I love it, I also miss the days when I was a bit spunky and didn’t care what people thought of me. Back then, I was so free, wild, and fun — the world was literally at my fingertips. I could be whoever I wanted, pink hair or not. Now, life is different. I have a daughter, a husband, a life in a foreign country. Inside, though, I’m still that carefree, spunky, wild, fun woman. So, I had a thought — what if I dyed my hair hot pink again? It wasn’t a mid-life crisis, by any means, but I wanted to stitch the parts of me that mattered — and the ones that I’d been missing — back together.

I wanted to see how everyone in my life reacted to my bright-pink hair. Would my husband love it? Would my daughter get a thrill out of it, and would she want to dye her own? Since we’re currently stationed in Italy, how would Italian men and women view me? Would Italian mothers silently scold at me? I was ready to find out — and ready to resurrect the ballsy, punky girl I was in high school. So I ordered four tubes of Joico’s Pink hair dye since my stylist told me it was the best and the most long-lasting.

I was slightly nervous about my big transformation, but more than anything, I was excited. The great thing about being in my 30s has been realizing that I care less about what people think of me than I did as a kid. I have more confidence in my decisions, and I certainly have more body confidence than I did as a teen. So, when I saw my hair in the mirror, all fresh and fun and pink and alive, I was so thrilled. I freakin’ loved it right away!

Before I even dyed my hair, my husband asked me if I thought I might be a little bit too old “for this kind of thing,” in which I promptly rolled my eyes and proclaimed that crazy hair colors defied all age expectations and limitations. Even though I don’t care what anyone thinks about how I look, I do care about what he thinks. I mean, he’s my husband, and his opinions matter to me in all things. So, my biggest concern would be that he might hate the way it turned out.

I was also nervous about what my church friends might think. I lead bible studies for our women’s ministry group, and it consists of women from all age groups. I was definitely afraid of being judged by the women in the class. mainly because, growing up, many of my Christian “friends” had had judged me for how I looked. I’ve always been the odd bird — tattoos, piercings, eclectic style — but I’ve toned down my look since becoming a mom. Now that I was letting the Real Me flag fly high again, I was worried that all the things that’d happened to me when I was younger might come roaring back to the surface — nasty looks and comments included.

I felt fairly confident that my mom friends would be cool with it, but I was nervous about what my parents might say. My mother, in particular, vehemently disagreed with my decision in high school. She only allowed it because she knew I was joining the military. Still, it didn’t stop her from trying to dissuade me every step of the way.

Let’s start out with my mom’s response, because out of all of the responses I received (and there were many), hers was my favorite. When I received her text message asking if my bright new mane was temporary or permanent, I totally thought she was going to come back with another response, something more along the lines of, “aren’t you a little old for that?” So, when I got some positive affirmation, I was just a tad blown away. I also couldn’t help but wonder if it killed her a little to say that.

Growing up, my mom and I never saw eye-to-eye about appearances — my own or anyone else’s. She’d argue that I wouldn’t get anywhere in life with pink hair, tattoos, and piercings, and I’d argue that my brain mattered more than any of those did. I think, as the world has evolved since then, so have our opinions. I’ll agree with her that certain jobs require a more toned-down appearance, but I’ve also been pretty successful with my tattoos, piercings, and pink hair.

My husband’s response was … romantic, and not in a PG way. He was in Africa at the time, so I had to send him a selfie, and his response went a little like this: “I’d nail ya!” Yep, he’s a man of few words, but it still made me blush and grin from ear to ear. He also started calling me “Pinky,” though thankfully that moniker has since died out.

My daughter’s response was exactly what you’d expect from a 2-year-old. When I picked her up from school, at first I wasn’t sure if she noticed, but when we got home she tried to eat my hair because apparently it now looked “extra delicious.” But, as it usually does with toddlers, her interest wore out within a few hours.

I also noticed that I get a lot more stares from Italians. Though they didn’t say a word, so many people just craned their necks and follow me with their eyes when I’m walking or driving by. To be honest, I’m not totally sure if this is a good or a bad thing, but I’d be lying if I said the added attention didn’t thrill me!

My mom friends, church friends, and Facebook friends all responded with overwhelmingly positive reactions. That baby bump selfie alone received 103 “likes” on Facebook. My mom friends loved it, and even more shocking, they want a mane to match mine now, too. My church friends have been so positive and so loving, which was great reminder for me that I’m not the only person who’s grown up. Even the people who judged my hair back when I was 17 and 18 might have different opinions on it now. Back then, we were all trying so desperately to fit in and be the same that no one of dared to believe straying from the norm would actually be cooler. It took time, and age, to make us realize that.

Instead of nasty comments, everyone has been telling me how great I look, and how much they wish they could dye their hair like mine. I’ve even been told how “cool,” which, honestly, I’ll probably never get over. Not one bad thing has been said, and I love it.

How Changing My Hair Color Changed Me

I don’t know how long I’ll keep my hair like this, but I’m pretty sure it’s not going anywhere anytime soon. The only con about having such a noticeable head of hair is that people recognize me wherever I go. In fact, people are even asking if I’m the “girl from that picture” — the one my stylist posted to her Facebook page. Because the military community is so small, I’m shouldn’t really be all that surprised that people can spot me from a photo, even if they don’t know me. Still, it feels good to be seen. It feels good to be found.

I can’t tell you how blown away I am by all of the positive responses. I am so grateful to be surrounded by family, friends, and acquaintances who see me for who I am and not how I look. My hair is more of an accessory than my identity, and it’s nice to see other people can see that, too. My hair isn’t all of who I am; it’s just a piece. Growing up and being expressive with your appearance when you’re a teen is so much harder than when you’re an adult. Your peers judge you because appearances are the only thing that matters, while adults have the pleasure of knowing it’s not.

Who knows what the future holds for my hair? So long as this color works, maybe other shades will too.