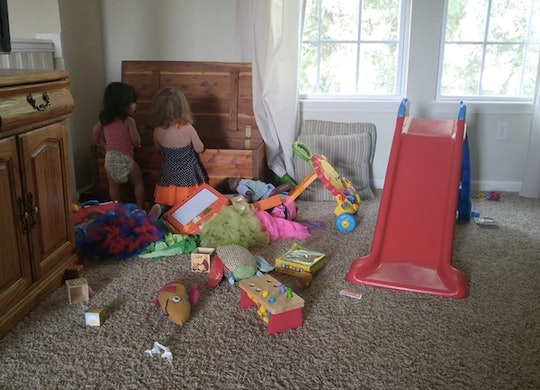 I Eliminated Screen Time For A Week, & Here's What Happened

Even though my parenting leans towards crunchy, screen time has never been something I’ve felt compelled to give up entirely. Moderation has always seemed like the best fit for our family when it comes to “treats” like these, and allowing small amounts of screen time for my toddlers has played a big role in sticking to a routine during our days at home.

Typically, my toddlers wake from their naps around 3 in the afternoon. When my younger daughter wakes, she practically pops out of bed ready to play. My older daughter, on the other hand, needs a gentler transition from her nap. Spending half an hour in front of the TV with her favorite blanket usually does the trick, and then she’s ready. (See what I meant about screen time playing a big role in our day-to-day routine?)

But after realizing some changes in my work had caused our screen-time rules to be thrown a little out whack, I sat down with with my husband and approached the idea of letting go of screen time completely for a week. The girls rely heavily on him for entertainment when he is home, so he wasn’t a big fan of the idea. Even so, I was able to convinced him I would find plenty of creative ways to fill the girls’ time and he agreed to give it a try.

My husband and I settled on an entire week without any TV or games on smartphone. We agreed we wouldn’t talk to our 3 year old about the break (we knew our 1 year old wouldn’t care either way) mainly because I was worried if she knew we were taking a long break, she’d become more fixated on her lack of TV time.

Experimenting with a break from screen time wasn’t just about breaking a bad habit. Even though TV time is big a part of our routine, I have my doubts about how necessary it really is to keeping our kids entertained. Both of my girls play well together and independently, and I wanted to see if they’d be able to fill the extra time without the TV in their lives.

Could we do it? Would we drive each other crazy?

Day 1: No Screen Time, No Problem

I had planned an incredibly busy day with the girls, and that turned out to be the best way to begin our TV fast. We packed a lunch and headed to the zoo in the morning. By the time we got home, both girls were practically falling asleep in their car seats, so I simply transferred them to their beds and enjoyed a nice quiet nap time myself.

I was most concerned about my oldest daughter being upset she couldn’t watch TV after her nap, but on this particular day, Grandma was meeting us at the pool so we didn’t have time to miss post-nap TV. It was the distraction that we needed to move straight from nap to pool, so there was no fussing, crying, or frustration that TV wasn't an option. Having a plan in place (and letting the girls know what they could expect) meant that there were no surprises, and the ease of them knowing what was coming next meant less stress for me.

One day down and I was feeling good.

Day 2: Is It Possible To Work From Home Without The TV?

The second day would prove to be much more difficult. We didn’t have any plans, and I had work to get done. After struggling for an hour or two to keep everyone entertained while I worked, my mom offered to take the girls for three hours so I could write, which meant I would be able to wrap up my work and avoid using the screen as a babysitter.

Honestly, I’m not sure how I would have managed without my mom’s help, and I was starting to worry how the rest of the week would go without the TV. It's a huge relief to be able to lean on a family member when I have work to do, and I was so thankful to have her around this day. Working from home means that I have to work around the needs of my kids, and sometimes that gets complicated when I have work I need to take care of too.

If my mom hadn't been around to help, it wouldn't be hard to imagine what would've happened: I wouldn't have been able to get work done, and the TV probably would've gone on.

Day two wasn’t horrible, but it left me wondering if I rely too heavily on screens as a way for me to get my work done.

Day 3: I’ve Made A Huge Mistake

When I woke up on day three, I was hit with the realization that I had chosen the worst weekend to give up TV. My husband had planned a camping trip with some friends, so I was solo parenting all weekend. I hadn’t made any plans either, so I was scrambling to find ways to keep everyone entertained without the help of their favorite playmate. Without having the TV to "lean on" to help give me a break during the day to get little things done or to take a minute or two for myself, I was worried how the weekend would go.

We wound up running some errands together (a good excuse to get out of the house and keep the girls distracted) and setting up activities outside that the girls love and enjoy. Being outside for most of the day gave us the opportunity to introduce ourselves to a neighbor who’s just a little older than my 3 year old. Maybe we'd have met our neighbors on another day, but I was delighted to make a new friend and the girls felt the same. If we were cooped up inside, we would've missed the opportunity.

Even though day three took a little more creativity on my part, it forced us to spend more time outside.

Day 4: Ready To Throw In The Towel

I expected Sunday to be the easiest day since we spend most of the morning at church. What I forgot to take into account was that I would be getting myself and both girls ready for church alone since my husband was camping. The reality was, keeping both girls entertained while attempting to style three heads of hair, dress three bodies, and do my own makeup was far from easy. Things got worse that afternoon when one of my daughters hurt herself and was in a mood for the rest of the day.

Can I be brutally honest? I wanted so badly to just flip on the TV when I grew tired of juggling bad moods and solo parenting. Still, it wasn’t so hard to fill the time with crayons or puzzles.

On Monday, I had to have an awkward conversation with their grandma, who watches our girls for free. It was something like: “Hey, I know we don’t pay you anything to watch our girls so I can write for five hours uninterrupted, but could you not let them watch any TV today?” Even though our babysitter was more than happy to comply, I felt like I was being a demanding parent. Still, Monday was probably the easiest day this week, and I was incredibly thankful for it.

That evening, my older daughter asked to watched Robin Hood. When I told her no and suggested we go for walk, she didn’t even blink before saying okay. At this point, I was beginning to wonder if taking a break from the TV is harder on me than it is on my daughters. Because honestly, neither toddler had thrown a single screen time-related tantrum since the week started.

Maybe the TV had become such an important part of our lives because I so frequently feel needed to use it for a break.

Sitting at breakfast on Tuesday morning, my 3 year old was quietly eating her peanut butter toast when she stopped suddenly and said, “Mama, are we taking a break from the TV?” I guess she’d been paying more attention than I thought. Instead of telling her exactly what I was up to, I asked her she was feeling about the break. Her response?

“Maybe I can watch Robin Hood on Friday? Maybe I can do some puzzles today?”

I was so surprised by how little she cared about skipping TV and I was starting to think about how would much we would use screens in the future. The ease of the first six days of this experiment had me considering indefinitely reducing our screen time to once or twice a week.

Day 7: Sometimes, A Break Is Nice

Knowing this was the last day of our screen-time fast, I planned to take the girls out of the house for the day just in case we were starting to feel a little bored. We spent the day at IKEA. When we got home, I was completely wiped out from an entire day out and about with the girls.

And on this particular day, I realized using the TV for an occasional break is not all that bad, especially when it’s used to relax as a family after a busy day out.

Looking back, this challenge was so much different than I thought. I expected it to be hard. I expected to deal with a few tantrums and a lot of tears. I expected I’d have to bribe my daughters with a lot of distractions every time they wanted to watch TV. I was concerned I’d be exhausted by having to entertain them round the clock, but they both entertained themselves so well. My older daughter was an awesome playmate to my 1 year old, and she spent hours this week pretend reading to her. Sure, we had a few rough spots, but all-in-all, taking a break from the TV was super easy.

This may sounds dramatic, but I kind of feel as if eliminating screen time from my toddlers’ lives saved our summer. And in a lot of ways, it was harder on me than it was on the girls. Giving up the TV forced me to be more creative with our days. We went to the zoo, swam multiple times, read piles of books, put together numerous princess puzzles, and even made a trip to IKEA.

Now I’m not sure how much of a role TV will play in our lives. I know it’s been a nice part of our routine, but now I find myself wondering if it is still a necessary part of our everyday. If a week completely screen free went off without a hitch, why not see how long we can go?