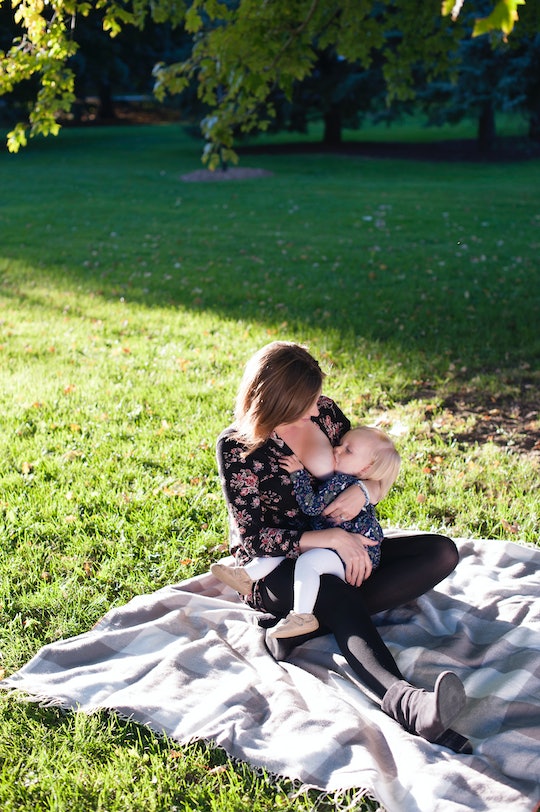 I Failed To Wean My 1 Year Old & I'm Not Ashamed

Everything in my breastfeeding journey has gone to plan: I started breastfeeding right away, never had a problem with supply, and I've loved every minute of it. Everything, except for one thing: I'm still breastfeeding but I'm not supposed to be. But even though I failed at weaning my daughter off the breast, I'm not ashamed because I don't see it as a failure.

Last August, my husband and I were scheduled to go on our first trip — a week-long vacation to New York City — without our 15-month-old daughter. And then the following month, she would start daycare, so there was about to be a lot of upheaval in her life. So in the three months between her birthday and our trip, I'd planned a gradual weaning schedule that I hoped would make that upheaval easier on both of us. The first month, I stopped offering her the breast whenever she wanted. Instead of on demand, she breastfed only before naps, after she woke up in the morning, and before she went to bed at night (and she'd weaned herself from night feeds a month earlier).

The next month, I took away her nap-time feeds by singing, cuddling, and reading to her to replace the comfort breastfeeding provided. She responded to both steps well. But I knew that the last month, when I was supposed to stop our early morning and before bed breastfeeding sessions, would be tough. She clung to those parts of her routine — something the Mayo Clinic reports as common, as children have a greater need for comfort during these times of day — and so did I. And when I looked beyond that, when I faced the idea of not being able to breastfeed my child anymore, I was heartbroken.

The idea of bringing a breast pump with me on vacation so that I could continue to breastfeed a toddler who no longer needed it seemed silly and self-indulgent. But to hear someone else say it, out loud, made me think maybe it wasn't so ridiculous.

I felt trapped on the path I was on. We were leaving in a matter of days to go on a vacation I didn't want to cancel but also one I no longer looked forward to. The trip no longer signaled what it was supposed to be — some much needed time alone with my husband — and instead it signaled the end of my time as a breastfeeding mom. As hard as weaning was on me personally, I'd already started the process so even if I could stop, it seemed like a bad parenting decision to do so. What kind of lessons would I be teaching her if I stopped weaning midway through? That if she fussed enough, she'd get what she wanted? Would I be hindering her ability to self-soothe or find comfort in new things if I failed at weaning? Was I spoiling her? Was I spoiling myself?

But even as I struggled with these questions and thought about the freedom I'd regain once my daughter was weaned, I still couldn't bring myself to cut off those last two feeds, even as our departure loomed closer. I knew that the longer I waited, the harder it would be on my daughter and me. So I reached out to friends for help and they pulled through. I got so much great advice and support. But still, I couldn't bring myself to give it up. That is, until my husband suggested I bring my breast pump with me on our trip. I'd entertained the notion once or twice before but had dismissed it. The idea of bringing a breast pump with me on vacation so that I could continue to breastfeed a toddler who no longer needed it seemed silly and self-indulgent. But to hear someone else say it, out loud, made me think maybe it wasn't so ridiculous (and I should mention that my husband is not the type to indulge my every whim).

When I gave myself the space to imagine pumping on vacation, then coming home and still being able to breastfeed, it left me with a profound sense of relief. A weight had been lifted. So, I did just that. I went on vacation and pumped. I felt excited and happy to be alone with my husband and I didn't feel like I was sacrificing something or that I was selfishly taking something away from my daughter to do it. And then first thing I did when I got home was sit in the rocking chair in my daughter's room and breastfeed and it was wonderful. It was like I'd never left.

Failing to wean wasn't really a failure for me. Weaning wasn't making me happy and I know — though my daughter would have eventually adapted as children always do — it wouldn't make my daughter happy. And while I do not think it is my job to make my daughter happy all the time, I do think sometimes being happy is more important.

My daughter doesn't need to breastfeed, but she wants to. It's something that makes her happy and it's something that makes me happy to do for her. I'm sure the idea of extended breastfeeding — defined by the Mayo Clinic, as breastfeeding a child past 1 year of age — and of the lengths I went to to continue breastfeeding seem ridiculous to some and that's OK. My point isn't that everyone should breastfeed on an extended schedule. My point is that failing to wean wasn't really a failure for me. Weaning wasn't making me happy and I know — though my daughter would have eventually adapted as children always do — it wouldn't make my daughter happy. And while I do not think it is my job to make my daughter happy all the time, I do think sometimes being happy is more important.

Yes, I am selfish for breastfeeding my toddler-aged child. But being selfish has made me happy and being happy makes me a better mom.

And to answer my own question, yes, I do think I was spoiling myself by deciding to continue to breastfeed. But just as I think it's important to teach her to self-soothe, or that she can't always get what she wants, I think it's also an important lesson to teach her to spoil herself sometimes, to take joy in the small, quiet moments we can eke out everyday. For me, breastfeeding is that joy. So, yes, I am selfish for breastfeeding my toddler-aged child. But being selfish has made me happy and being happy makes me a better mom.

She will be 2 years old in a few months and we are still breastfeeding but now she is constantly moving, standing, playing, and sometimes trying to slide off the bed while still attached to my boob. She'll stop when she is ready; I imagine that might be sometime soon considering our two sessions a day last around 5 minutes each. Or I will stop her, this time, when I know I am ready. I still love breastfeeding, but all those other reasons I had for wanting to stop — more vacations with my husband, new bras, less milk stains — are still there, they're just not as important to me as I thought they were. But I can't make myself feel ashamed for failing to wean because I think my real failure would have been not listening to my heart.