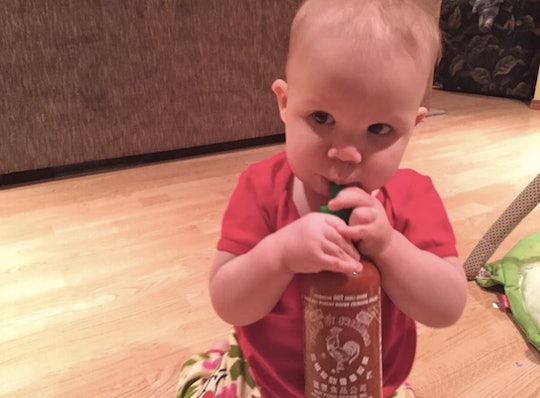 I Fed My Baby Spicy Foods, & This Is How It Went

Making sure that my kid is an adventurous eater is one of my parental sticking points. I love food, and I want her to, too. It’s kind of a thing in my family, I guess; when my niece was 3 years old, I watched her eat a golf ball-sized gob of wasabi off of a sushi platter. When my cousin was little, she used to eat these habanero chips by the bagful. We’re a big, loud bunch of adventurous eaters who have always gathered together around food, and I want to pass that tradition on to my girl.

We tend to think of babies as tender things, with fresh, sensitive taste buds that haven’t been deadened yet by hot coffee and Sriracha. But as it turns out, little ones start developing an interest in flavor while they’re still in the womb. After they’re born, they get a taste of what you’ve been eating through your breast milk. So if you choose to breastfeed, and you like your Chipotle spicy, then it follows that your baby will also enjoy bold flavors.

My kid’s journey into solid food was rough at first; she has a very sensitive gag reflex, and there were a lot of projectile vomiting instances early on. I had to work her up slowly to eating anything even a little bit chunky. But even though something as rough as oatmeal could make her gag, she’s always loved strong flavors.

She’s nine months old now. For the past three months, she’s tried and enjoyed things like cinnamon, nutmeg, and mild curry. Now that she’s getting better with textures, I find it’s super easy to just blend up whatever I’m having for dinner and give it to her. Since I eat a lot of spicy food, I figured it was the perfect time to introduce some more heat into her diet.

For seven days, I tried to include spices in my baby’s diet that she had never tried before. Now, let’s define our terms here. When I say “spicy,” I’m not talking about anything too crazy. I don’t want to pull a Jamie Oliver. I don’t think causing my kid pain is a good way to get her interested in new foods, but I am happy to turn her on to new flavors and a little heat. Everyone’s perception of what’s spicy is different, but I didn’t feed her anything beyond what I’d call “moderate” on the spice scale.

I tried to prepare foods from different cultures too, which is something I do a lot, because I love foods from all over the world, and I currently live in a cultural wasteland (Fort Frances, Ontario, Canada, OK?). I am in no way an expert, though, and I don’t claim that anything I made could be called “authentic.” My local grocery store literally just started selling fresh lemongrass. So. I do my best.

For each day, I’ll sum up how much of a success her meal was, and I’ll also let you know what her poop situation was like after she ate it. We’ve all had a painful or gross bathroom experience after eating something spicy, so I’ll take note of any diaper rash or changes in smell or texture. Isn’t it fun how becoming a parent leads to in-depth poo examination?

For the first day, I didn’t want to do anything too advanced, so I whipped up a sweet potato curry. I used one sweet potato, onion, garlic, curry powder, turmeric, cumin, coriander, cayenne, and coconut milk. When I had scooped out my portion, I added in some rice to what was left and blended it with my immersion blender.

She loved it! I wasn’t sure what she’d think; as I said, I had eaten this for dinner as well, and I found that it had a subtle but definitely noticeable heat. I could tell she was thinking about it on the first bite, and it took her a couple minutes to open her mouth for more. But once she did, she gobbled it all up and wanted seconds!

Day Two: Too Much Sriracha

This was a night when I had to work, and I didn’t have time to do anything homemade. I heated up a pack of Baby Gourmet Chicken Minestrone Soup and mixed in some Sriracha.

This didn’t go over well, and in retrospect, I put way too much hot sauce in there. She started coughing after the first bite, then her little face turned red and she adamantly refused to take another bite. I ended up mixing it with some yogurt to cool it down. After that, she seemed to enjoy it.

I can’t remember what I ate this night. Probably this snacking chocolate I’m currently addicted to. I know I was feeling very autumnal, and also I had a very tiny acorn squash I needed to use up. So I made this stew with acorn squash, white kidney beans, onion, garlic, apple, cinnamon, clove, black pepper, ginger, and just a bit of maple syrup.

Contrary to her initial epic shudder, she loved this one. I can always tell when my kid really likes something, because she barely swallows what’s in her mouth before she’s demanding more. She ate up her first portion and had seconds, too!

Poo situation: So gross, y’all. Like, the smelliest, grossest poop she has ever had. It looked normal, though! So, 50/50, I guess?

I’ve been sick for the past couple of weeks, so I decided to make myself a batch of pho ga, which is probably my favorite food in the entire world. I made my own stock with a leftover chicken carcass, lemongrass, ginger, cloves, coriander, onion, cayenne, fish sauce, and cinnamon. Then I added in some leftover chicken, a couple boiled eggs, rice vermicelli, and a hefty squirt of Sriracha.

It was a sad approximation of the pho I used to eat in Vancouver, but it was comforting all the same. After I was done, I figured I could just blend it up a little and feed some to the kid for dinner.

This one was a pretty huge fail. After the first bite, she literally punched the spoon out of my hand when I tried to offer her more. I think this was probably a texture issue. Partially blended rice vermicelli is probably a bit slimy and gross. Or maybe it was the fish sauce. I was disappointed that she didn’t enjoy it, but I’ll make a pho lover out of her yet!

To compensate for the pho failure, she ended up having a squeeze pouch of sweet potato, apple, and corn instead.

Success: Most definitely not.

Day five of the spicy experiment took place on Canadian Thanksgiving, which is exactly like American Thanksgiving, but in October. So although she ate a lot of new things, like mashed potatoes, gravy, turkey, and cranberries, none of it was particularly spicy. Our family does a potluck Thanksgiving, and we were in charge of bringing the pies. I guess if we wanted something spicy, we should have brought it ourselves, but I definitely spaced it out.

She sure loves pumpkin pie, which is good because otherwise I’d sort of wonder if there was a hospital mix up situation and she wasn’t really my kid.

I decided to make rice and beans today, because I’ve discovered that my daughter loves rice. She’s started really noticing what I’m eating, and I often can’t get through a meal now without her insisting on trying some. I eat a lot of rice, and she’s had success with the new texture.

I tried to give her some off my plate just to see what happened. My rice and beans had rice, black beans, pepper, paprika, onion, garlic, tomato, and oregano in it. She ate one bite and wasn’t too impressed.

But tonight marked the first time I was able to convince her to keep trying something that she didn’t like at first, which felt like such a huge win. I found that as long as I let her hold the fork and try to feed herself, she’d keep trying little bites. In the end, I think she liked it.

This kid loves anything with a nipple attached to it. She saw me carrying around the Sriracha bottle and she kept trying to snatch it from me. There was a little bit of dried sauce on the outside, so I thought, okay, this is it. This will be the final test of whether or not she likes spicy food.

I handed her the bottle and she stuck it right in her mouth and started sucking on it. At first, she made a bit of a face, but she kept going back to it.

I thought maybe there wasn’t enough on the outside for her to actually get a sense of the taste. So I squirted a little drop onto my finger and let her lick it off.

Again, she made a little face at first, but then she immediately started whining for me to squirt more onto my finger so she could taste it again. Of course, Sriracha isn’t the spiciest hot sauce by a long shot. But I was pretty impressed either way!

Could My Daughter Handle The Heat?

I can keenly remember being little and not wanting to eat shepherd’s pie, and my mom getting super frustrated with me. I remember feeling so bad, wanting to please her, but the thought of eating that shepherd’s pie really just made me want to gag. But even though I went through fussy periods, I turned out just fine. This experiment reminded me that all things come with time; the important thing is that I continue to offer her new things, whether or not she enjoys them on the first try.

I also learned that white kidney beans make my kid’s poop smell really, really bad. So no more of that, OK?