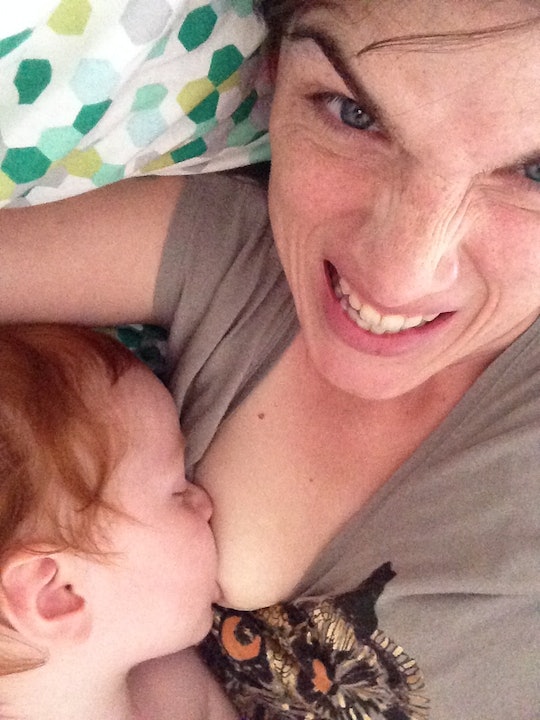 I Feel Guilty About Extended Breastfeeding, But Not For The Reason You Think

Breastfeeding my son Harvey until he was almost 3 years old wasn't a conscious decision. It was more like a happy accident. We both loved having bonding and cuddling time, especially after I returned to work. The fact that my breast milk also provided an extra immune system boost for him sweetened the deal. The only downside seemed to be the mild inconvenience of a kid crawling all over me for a few years.

But then one trip to the dentist office put a serious crack in my confidence. Now, I feel so guilty about extended breastfeeding my son.

When I finally weaned Harvey, it was simply because we were both ready to move on. At first, I looked back on those few years with not only zero regrets, but with a strong sense that I had done the right thing. Extended breastfeeding was awesome!

Then, when he was 4, I took him for his dental checkup. We had been dutifully taking Harvey to the dentist since he was 6 months old, but he’d not been able to get an x-ray until after his fourth birthday. The results? Harvey had a cavity — plus a few more potential cavities on the way. As someone who has a fear of dentists, I couldn’t imagine a worse outcome for my equally sensitive son. And even worse, I felt totally to blame.

I'd heard rumors about the potential connection between breastfeeding and cavities before. A few annoying friends had brought it up to me, saying that extended breastfeeding put kids at risk of developing tooth decay, especially if they nursed at night (which Harvey did…a lot). I’d always dismissed them as weird, judgmental ramblings that probably originated from unreliable sources, like formula companies. I'd never taken the time to do any research on my own. But when Harvey came home with a cavity, I finally had to face the fact that there may be some truth to the effects of extended breastfeeding on kids' — and specifically my kid's — teeth.

A recent study on long-term breastfeeding and cavities confirmed my fears. Researchers looked at more than 1,000 5-year olds and found that the children who had been breastfed for more than two years had more severe cavities than the ones who were breastfed for less than a year. Yikes! Even worse, the author of the study — Dr. Karen Peres of the University of Adelaide — outlined exactly how I’d personally gone wrong:

First, children who are exposed to breast-feeding beyond 24 months are usually those breastfed on demand and at night. Second, higher frequency of breast-feeding and nocturnal breastfeeding on demand makes it very difficult to clean teeth in this specific period."

The takeaway of the study? Harvey's prolonged exposure to sugary breastmilk, combined with the fact that I wasn't brushing his teeth enough to protect his teeth, might've led to him developing cavities. Cue the intense mom guilt.

At best, I feel stupid. At worst? Neglectful — especially when it appeared that something as simple as brushing Harvey’s teeth in the morning might have avoided him needing a filling when he was 4. (He handled the procedure like a champ, by the way.)

If I’m being totally honest, there were likely a few other culprits as well: Harvey drank too much juice, and he often had a banana before bed without brushing his teeth again. We’ve since corrected these habits, and added more fluoride-enhanced tap water to his diet. Plus, Harvey is now very involved with his dental health, in a way that most 5-year-olds may not be unless they’ve experienced the drill firsthand. Not only does he take brushing very seriously, he has also started flossing (!!), and proudly picked out his own special kids ACT mouthwash as recommended by his dentist.

Now that we're armed with this new dental knowledge, we are much more proactive with our daughter, Mabel, who at 22 months is still nursing and shows no desire to stop anytime soon, especially at night. She loves boobs a lot. She calls them "a-boobies" and sometimes I suspect that she likes them more than she likes me.

Being a parent in these information-heavy times means that no matter how good we feel about one choice we are making, there are thousands of opposing views waiting in the wings ready to prove us wrong.

Still, part of me really wants to wean baby Mabel before her second birthday to avoid yet another traumatic trip to the dentist. But if I weaned her at 2, I worry that I would also be denying her the added benefits of nursing that her brother enjoyed. After all, the whole point of extended breastfeeding was to benefit Harvey's health. Doesn't Mabel deserve the same experience? Does this one risk of cavities outweigh the potential rewards of extra breastmilk?

To me, the answer is clear: no.

Being a parent in these information-heavy times means that no matter how good we feel about one choice we are making, there are thousands of opposing views waiting in the wings ready to prove us wrong. We are all damned if we do and damned if we don't. Maybe Mabel won't get cavities. Or maybe she will. But extended breastfeeding is what I want for her, so I'm not going to give it up. We'll just brush her teeth multiple times a day, avoid juice at all costs, and make sure she eats lots of hard cheese and drinks tap water to strengthen her teeth.

Ultimately, I can’ t predict the future or beat myself up for the past. I can only keep doing the best that I can and doing what feels right for my kids, with, like, 50 percent more teeth brushing. Plus, Harvey on nitrous oxide was pretty hilarious, and somehow, giggling at my kid high on laughing gas was a nice counter to the soul-crushing waves of mom guilt. Laughter may not have as many health benefits as breastfeeding and fluoride, but sometimes it’s the best medicine for me.