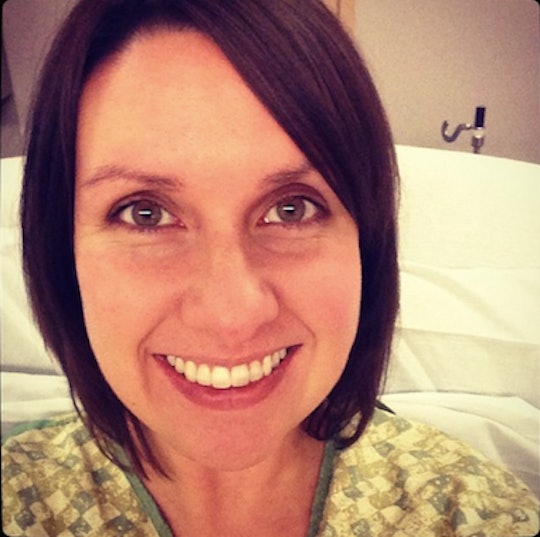 I Hated The Pressure I Felt To Have A Home Birth

By the time I learned I was pregnant for the first time, my husband and I had lived in Portland, Oregon for nearly five years. We become what I like to call “granola light”: we dutifully recycled, but gave up on composting after two weeks; we downgraded to one car and spent a great deal of time hiking and camping, yet we refused to give up our big fat flatscreen TV. Still, I was determined to soak in Oregon’s natural wellness vibes and will myself to have the healthiest possible pregnancy and birth. I amped up my organic farmers' market produce purchases, signed up for stress-relieving prenatal yoga, and cut my soda consumption dramatically. I was completely new at this pregnancy business, but I was determined to bring my child into this world in the healthiest way possible.

At one of my prenatal appointments somewhere around the midpoint of my pregnancy, my OB-GYN checked in to make sure I’d be giving birth at the hospital where her office was located. I realized that I hadn’t yet given it much thought, so when I got back home, I began Googling and texting already-mom friends in the area. Where had they had their babies? Was it a good experience?

Immediately, several of my friends started raving about their home birth experiences. “It was so peaceful," one said. “The pain was real, but it was natural and cleansing, it’s totally different than regular pain!” “No meds, no intervention, no hospital germs," another added. "Just family and lots of time to nurse and bond together.” I was convinced. A home birth sounded so cozy and manageable, while my Oregon friends made hospital births sound a little like an alien abduction. “The fluorescent lights! The cold metal! The germs!," they'd say. "You’re pumped full of God-knows-what toxins!” It all sounded vaguely terrifying. So I started considering having a home birth — even though later, I'd change my mind and be shamed for it.

I wanted to be an organic granola goddess. I wanted to reach down and pull my baby out with my own hands and then immediately breastfeed under layers and layers of organic muslin blankets.

Before becoming pregnant, I always admired women who had home births. It felt so empowering and natural to just skip the hospital, as women had done for thousands of years, and trust your body to take over and deliver with as little medical intervention possible (except perhaps a kind-eyed and skilled doula named Quince there to hold one’s hand and coo wisdom and breathing exercises). And in fact, I still feel like having a home birth can be a beautiful, peaceful way for some women to bring a child into our chaotic world. As it turned out, it just wasn't the right choice for me.

I wanted to want a home birth. I wanted to be an organic granola goddess. I wanted to reach down and pull my baby out with my own hands and then immediately breastfeed under layers and layers of organic muslin blankets. But anytime I began seriously considering the prospect for my own upcoming labor, I felt a cold pit of dread and fear in my stomach.

Unfortunately, I’m not that mom. I’m just not. I cry at paper cuts. I don’t play team sports. I’m plenty tough in lots of other ways that don’t involve shooting a watermelon-sized object out of my vagina, but I know myself well enough to know I am a giant wimp when it comes to experiencing physical pain. And as a first-time mom-to-be, I felt enough fear about the labor and delivery process without throwing the prospect of an unmedicated birth into the mix.

Still, the home birth option kept bubbling up in conversation with other local women. Many women who had gone the home birth route seemed to have become convinced that a drug-free at-home birth was virtually the only acceptable, safe way to welcome your baby into the world. More than one stranger flat-out told me in casual conversation that if I chose an epidural, I would irreparably harm my baby (which is factually incorrect, by the way — while epidurals can cause nausea and itching during labor, there's no evidence to suggest they're linked to a high risk of serious complications).

I’d smile and nod and try to convince myself a "natural" home birth might be right for me after all, even though I felt miserable every time I thought about it.

At this point in my pregnancy, I was already oozing with hormones. Hell, I'd cry from the stress of simply filling out a baby registry (“What the hell is a Bumbo?” I'd wail at my laptop. “What’s a Wubbanub??”) I was not prepared for the Portland home-birth-or-bust set to go HAM before I even had a baby. Still, I’d smile and nod and try to convince myself a "natural" home birth might be right for me after all, even though I felt miserable every time I thought about it.

Eventually, I did some research centering mostly around costs and other practical concerns. As it turns out, our employer-sponsored health plan was great for hospital birth costs, but not so great for outside midwives/doulas, which were considered out-of-network. I also researched the hospital my OB-GYN was affiliated with and took a tour of the maternity floor. I was relieved to find this particular facility embraced a forward-thinking approach to things like immediate and prolonged skin-to-skin contact and the ability to choose one’s own birthing positions.

So at my next appointment, I chatted at length with my OB-GYN and ultimately decided that I felt most comfortable with a birth at her hospital. I knew I’d made the decision I was most comfortable with and instantly felt a rush of relief. But people-pleaser I am, I hated the thought that lots of people I respect would think it was a wrong or, worse yet, a reckless decision.

Forty-one weeks and two days into pregnancy, I'd reached the point where we needed to induce. I was showing preliminary signs of placental degrading, which can be dangerous for the baby, and the baby’s head was getting close to too big to fit through the birth canal. Because an induction requires you going into a hospital, my choice had largely become moot; even if I’d chosen a home birth, a home birth didn’t seem keen to choose me.

By morning, I’d still only dilated a few scant centimeters. Still peaceful and upbeat, I sat gingerly on a large blue yoga ball and slowly stretched while we watched TV and waited for some momentum to gather. Suddenly, I felt a little painless pop. “Hey! I think my water broke!” I said hopefully. I remembered that the birth class told us that a little blood was possible during the water break, but this wasn’t my water breaking, and it... wasn’t just a little. As I soon learned from the midwives and doctors who rushed in to examine me, I’d had a severe placental abruption, a serious complication where the uterus tears away from the placenta.

Being able to see my daughter’s steady heartbeat kept me from losing it. I needed all the reassurance those machines could give me.

Thankfully, I didn't panic, which I attribute to a combination of my faith, my rock-solid husband, and my medical team, which showed no signs of distress (though later, they all readily admitted they felt it). Throughout the whole process, my doctors reassured me that my daughter was in no immediate danger or distress. Being able to see my daughter’s steady heartbeat kept me from losing it. I needed all the reassurance those machines could give me in that terrifying moment.

Eventually, my doctor made the decision to perform an emergency c-section. I heard my daughter’s first cries, less than 10 minutes after entering the OR. It was the best sound I ever heard. She scored an Apgar score of 9 and avoided spending any time in the NICU. I got lots of skin-to-skin contact and breastfeeding coaching. We went home on schedule. She’s now a healthy, happy 3-and-half-year-old girl.

My hospital birth admittedly wasn’t as peaceful or drug-free as I wanted, but as it turned out, my particular birth was likely not going to be peaceful and filled with gently burning incense regardless. Still, I’d gone with my gut, which led me to a situation that, while scary, minimized my fear and provided me with the best options and support for my own situation, and I'd advise any moms choosing between a home or hospital birth to do the same.

Home births are truly awesome experiences for many, but with my many first-time mom fears and hang-ups (not to mention the complications) it wouldn’t have been the best choice for me at that moment. I needed to have a solid understanding of who I was and what I needed to get through one of life’s biggest events with my sanity mostly intact.