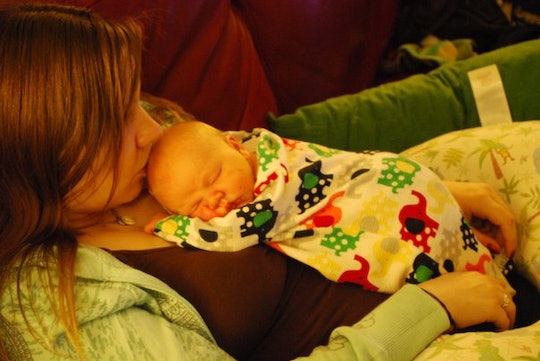 We managed to avoid that by accident. In fact, we avoided adopting a standard naptime routine altogether. My baby managed to take short, frequent naps during the day and fall asleep at a reasonable hour at night. We didn't do anything special or magical to get him to do this. We just wore him all the time, and he fell asleep.

I realize that we got lucky. It's tough for most parents to get their babies to nap during the day, so they have to resort to various other methods. Some people advocate for parents using the eat-play-sleep regime, with babies doing each for a set amount of time. Others recommend implementing a more strict schedule. “Put them down awake,” they say. “Let them stay there till they fall asleep.” But these things don't always work, which is why we came up with our own methods for putting our son to sleep.

I wore him when we left the hospital. I wore him around the house. I even wore him in the shower.

It all started when I was pregnant, when I read about attachment parenting for the first time. One of the central tenets of attachment parenting is babywearing, or putting your baby in a wrap so you never have to put him down. I was drawn to the idea, particularly after I read about the importance of having frequent skin-to-skin contact with your baby. We bought two Moby wraps and decided we would wear Blaise as much as we could.

The day after my son was born, my husband eyed the instructions. "If I can make Eagle Scout, I can manage this,” he said before wrapping himself up and wearing the baby. From that day on, I wore Blaise constantly. I wore him when we left the hospital. I wore him around the house. I even wore him in the shower. We only took him out for two reasons: to change him, and, in the beginning, to nurse. Later on, I’d learn to do that in the wrap, too.

Blaise stayed on me all day. When he was awake, he'd look at me and look at what was going on in the world around him. When he got tired of that, he laid his head on my chest, curled his hand next to it, and went to sleep. When he’d wake up, I’d usually take him out and nurse him. Then I’d put him back in the wrap. and he’d stay awake for a while before falling asleep again. I never thought of it as naptime. Instead, I thought of it as Blaise making his own decisions about what he wanted to do.

This worked with all my children. I'd just put them in the carrier and let them do their own thing.

I never put Blaise in the wrap for the specific purpose of getting him to go to sleep, but I later learned that the motion of me walking around puts babies to sleep. According to a study in Current Biology, the sensory stimulation that comes from rocking, swinging, or bouncing "exerts a synchronizing action in the brain that reinforces endogenous sleep rhythms." That's why moms tend to drop so much cash on swings and bouncy chairs.

This worked with all my children. I'd just put them in the carrier and let them do their own thing. They’d nap on their own time and wake up on their own time. I learned how to put them on my back, so I never worried about putting them down so I could cook dinner. When they got bigger and spent time on the floor, they’d start to get tired and cranky, so I’d scoop them up in the wrap, put them on my back, and sway in place for a while until they fell asleep.

Although babywearing worked for us, I realize that it might not work for every parent; not everyone wants to hold their baby throughout the day. That said, if you’re struggling for a way to get your new baby to sleep, particularly during the day when you're trying to get stuff around the house, babywearing is worth a shot. You can always try to lay them down in their bassinet once they’re out, and if they wake up, you can try wearing them through the whole nap. That way, you can avoid the newborn nap drama during the day.