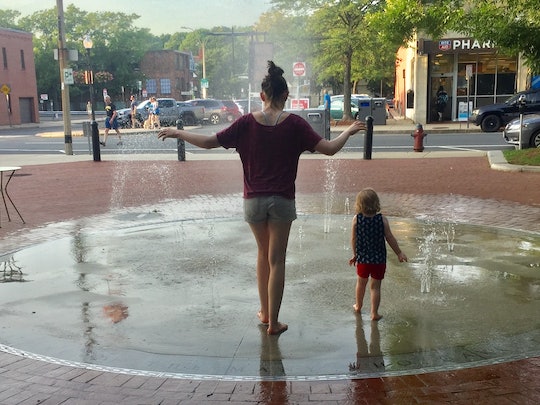 After 6 Years Of Being Pregnant or Nursing, I Finally Have My Body To Myself & It’s Terrible

For six and a bit years, I was either pregnant or nursing. That's six and a half years of hormones ruling my life, tiny people living in my uterus, and slightly bigger tiny people owning my boobs. Six and a half years where I lived in a post-baby body that still was not really my own. And I loved it! And then I weaned my younger kid — got my body back, as we say in poisonous corners of the internet where women are only valued for their physical shape — and good lord, everything changed fast.

I’m one of those lucky ladies who dug being pregnant and loved nursing so much she went to two and half years for both kids. I’m also one of those ladies society says are SO LUCKY, IMAGINE THE JEANS SHE CAN WEAR-LUCKY, who lost weight fast while breastfeeding. Sure, it wasn’t easy all the time, but for the most part, life was great.

When I finally weaned, the first thing to disappear were my boobs. Before I was pregnant, I had B cups which swelled to Cs then Ds as I kept popping babies out and nursing them. Well, a week after nursing for the last time, my boobies shrunk to a low B/high A. They changed shape from a pleasing O shape to a troubling U. And they have wrinkles. Like, big wrinkles. Like, “dang you should really iron those boobs out” wrinkles. My boobs have always been there for me and now… they’re strangers.

Next to disappear? My appetite. Even before I was pregnant and needed all those extra calories, I’ve always been an enthusiastic eater. I’ve never skipped a meal, I love to snack, and I relish a dessert packed with silly ideas. But now? I can barely finish my cereal in the morning. The free snacks at work — mostly untouched! It can be 2 p.m. before I realize that I never ate lunch. THIS IS NOT ME AND I DON’T LIKE IT.

Where my periods in the past would have one heavy day followed by four or five lighter ones, every day now is like the elevator scene in The Shining.

Just to clarify — I am still eating meals and being healthy, because I love this body and I will always take care of it, but it’s a shock all the same to not want to graze all day long like I’ve always done. The other day I said “no” to a donut because “I'm not in the mood.” I’m shook just thinking about it.

Another huge change? My periods, which have been back since last fall, are now SUPER-MEGA-EXTREME PERIODS. I’m bleeding through pads and underwear nightly. And where my periods in the past would have one heavy day followed by four or five lighter ones, every day now is like the elevator scene in The Shining: the flow is constant, shocking, and scares me so badly I need to put a blanket over my head while rocking in the corner.

Speaking of hormones… hoo boy, are they going bananas. In my old pre-mommy life, I had pretty bad PMS. It would last two weeks out of every month and often leave me crippled and crumpled on the couch at the end of the day. Now? We’re talking 25 days every month, including when I’m on my period! And it comes in every flavor imaginable: devastating cramps one day, jumbo bloating the next, followed by flakiness, nausea, depression, digestive issues and — a new addition — painful gas! Since weaning, I’ve had to call in sick twice only because of PSM symptoms. Midol kind of helps. The peppermint and red raspberry tea kind of helps. Exercise kind of helps. I’ve even — *gasp* — CUT DOWN ON MY CAFFEINE. But nothing really works.

“All right,” you think. “That all seems pretty bad. But at least you finally aren’t sharing your body with your kids anymore. That’s gotta be a relief, right?”

Oh, my sweet summer child. It would be, sure, if my daughter weren’t still obsessed with my boobs. We’re in a constant battle of hands thrust down my shirt (“I wanna touch!”), boobs pulled out without my consent, and begging for what she calls “pretend nursing,” where she lays her head on my booby like a pillow and mutters softly to it. Since we’re only two months out from weaning, I’m trying to be understanding… but it gets a little surreal around my house some days.

I’m hoping against hope that time will even everything out for my poor body again. And if not, I’ll check in with my gynecologist and see if there’s anything I can do to help. Otherwise, I guess I’ll just have to get pregnant again!