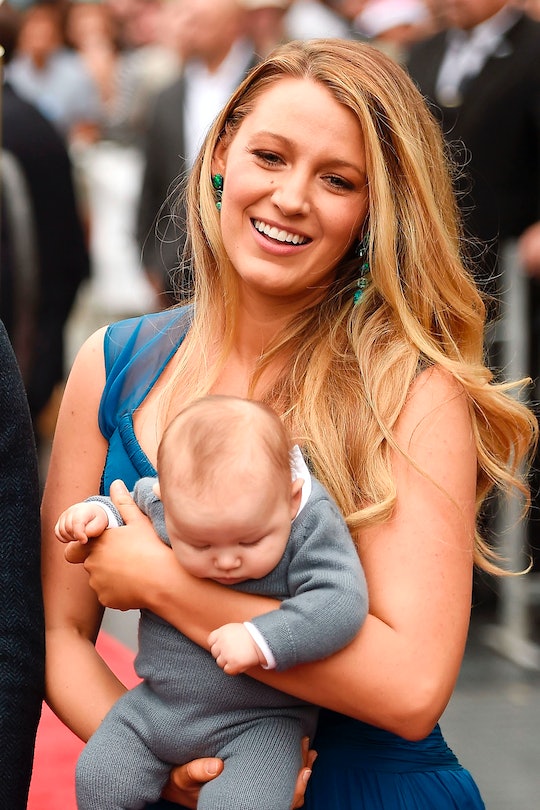 I Ate Blake Lively's Postpartum Diet For A Week

It's been nearly four months since I gave birth, and I’ve been steadily losing weight. Well, I’m sort of losing weight. It’s slow, sometimes infuriatingly so. I lose a pound, gain two back, miraculously lose three pounds, and end up a step ahead of where I started.

I’ve had a less than awesome relationship with food and my body since I first stepped on the scale at 11 and decided that the number I saw was too much for a girl my age. Since then, I’ve dieted more times than I can count and even had a short stint with purging (that my mom quickly noticed and put an end to, thank goodness).

After gaining nearly 80 pounds over the last 15 years, I finally decided to quit dieting, but to be perfectly honest, it didn't do much for the way I feel about my body. I wanted to feel more liberated, to eat what sounded good and to love the way I looked as is, but that didn’t quite happen.

After my third was born, I decided to start focusing on eating healthier, eating more protein, and increasing my veggie intake, rather than restricting my food intake altogether. While that's been working, slowly but surely, I wanted to speed things up a bit, so I started looking into different ideas for postpartum weight loss and came across Blake Lively's postpartum diet. I was intrigued. I mean, who doesn’t want to look like Blake Lively?

I decided I’d give a try, just for a week, to see if it sped up my weight loss a little bit.

I decided to follow Blake Lively’s rules for postpartum weight loss because I felt like it was less of a diet and more of a rubric for healthy eating. I didn’t want to restrict calories or go hungry, especially since I am currently breastfeeding, so I thought that adjusting what I was eating might make a difference.

According to an interview with Hollywood Life, Blake doesn’t eat any processed food while trying to lose weight, specifically avoiding gluten and soy altogether. I had already been eating pretty healthy, but I had never given up gluten, so I thought it would be an easy change to adopt without feeling too restricted. I was wrong.

I woke up on day one excited to implement my plan for the day. I made sweet potatoes, spinach and eggs for breakfast and I was really satisfied with that. For lunch, I made a stir fry with quinoa, veggies, and chickpeas. For dinner, I had grilled chicken, vegetables, and potatoes.

For the most part, I felt OK about the day. I was hungry basically all day long, and that was a little annoying because I didn’t really know what to snack on since gluten was off limits. I kind of felt like I could never really get full eating mostly meat and veggies.

I started day two with a little less excitement than the first. I woke up hungry, which I guess made sense since I was nursing a newborn all night long. The morning was chaos, as is typical when you are the mom of three kids age 4 and under. I rushed to get everyone fed while my littlest kind of fussed on his playmat on the floor. I could tell his good mood was slowly coming to an end, so I felt hurried to find something to eat. Normally, I would have had a quick piece of toast with some almond butter to hold me over until I had time to cook something, but I didn’t have that choice since I couldn’t eat gluten (or any processed foods).

By the late afternoon, I felt like a monster. I was hungry and cranky.

I fried an egg and ate it standing up while holding my fussy kid. It was far from satisfying and kind of set the tone for the day. I was having serious sugar cravings, and I missed bread. I don’t even like mac n’ cheese, but I still found myself staring hungrily at my kids plates while I ate leftover veggie stir fry for lunch.

By the late afternoon, I felt like a monster. I was hungry and cranky, so I scavenged through our pantry for something gluten free that would satisfy my sugar craving. There was nothing.

When I planned this little diet, I forgot to take into account that the holidays were right around the corner. I thought if I brought some diet-friendly food to my in-laws' house, I would be OK with missing out on all the treats.

I was wrong. I snacked on the food I brought, but I realized I felt like it was really, really dumb that I couldn’t have a single treat on Christmas Eve. I felt like I was missing out, especially since I made a new recipe for the occasion. Was it worth it? I apparently didn’t think so because I helped myself to a piece of cake without regret. Sorry, Blake.

To be perfectly honest, I didn’t even try follow Blake’s Diet on Christmas Day. I ate what was planned for our family meals, without a shred of guilt. Especially since it was a pretty healthy dinner of chicken, potatoes, salad and brussel sprouts.

By the end of the week, I was SO done with this diet. All it did was make me crave all of the things I felt I couldn’t have.

The real problem arose when dessert made its way to the table. I found that I was already dreading the next day, knowing that I would have to go back to strict eating. I started to feel that old diet mentality, the one I used to feel when I was eating too restrictively, the feeling that I had better eat all of the “bad food” right now, since I couldn’t have it again. It is one of the reasons why dieting doesn’t work for me. (In fact, it doesn't work for a lot of people, and can frequently lead to binge eating.)

I overdid it. I ate dessert, even though I didn’t even enjoy it all that much, and kept eating even after I was full. I felt like I should just go all-out if I was already "cheating" on my diet. I ended the day embarrassed and frustrated. Not only had I thrown out my eating plan for the day, I had gone way overboard.

By the end of the week, I was SO done with this diet. All it did was make me crave all of the things I felt I couldn’t have. I felt so restricted by not being able to eat processed food, and I was hungry all the time. I tried to finish well, but I felt so half-hearted about the whole thing. By the end of the day I officially declared the week over.

I was frustrated that my efforts to lose weight more quickly had only screwed up the good thing I had going on already. Sure, my weight loss was gradual, but I was eating healthy food that I liked and I wasn’t “cheating” because nothing was off-limits, so I wasn’t experiencing any cravings. Cutting out processed food entirely only made me feel like there were so many things I couldn’t eat if I wanted to lose weight.

From a week of following Blake Lively’s postpartum diet, I learned, hopefully once and for all, that dieting truly doesn’t work for me. Sure, her postpartum nutrition didn’t involve calorie-counting or low-carb eating, but it did make an entire list of foods “off-limits” and that sucks. It was hard not to beat myself up for failing, but I also know that a lot of research suggests that dieting in general is a poor approach to weight maintenance.

Now that the week is over, I'm ready to undo some of the damage it did to my self-esteem. At the end of the week, I felt like I had failed and that I would never reach the goals I have for my health. To be perfectly honest, instead of empowering me to take charge of my health, I think eating like Blake Lively really screwed with my confidence in my ability to lose weight and eat well.

I am happy to return to my previous approach of making generally healthy choices, staying active and remaining satisfied with my current weight loss pace, no matter how slow that may be. I may not look like Blake Lively anytime soon, but I will look like me and I won’t be miserable while doing it.