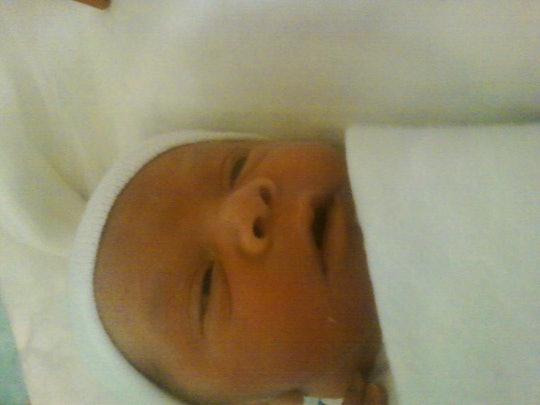 Getting Help For My Depression Was A Nightmare

I always knew I struggled with depression and anxiety. I worried about everything constantly. I had crying spells. But I was in denial about having a problem. I stayed in denial until I got pregnant for the very first time. As it turned out, pregnancy exacerbated my anxiety and depression so badly that I had to get help. I couldn't deal with basic elements of life, like watching my husband leave for work for a day. That led to a quest to find the medication that was right for me and my unborn child.

It was my first pregnancy, and everything worsened almost immediately. For me, the first sign I needed more than deep breathing exercises to quell my anxiety happened when my husband went to the three-day music festival Bonnaroo. He left me with my in-laws, and I spent those three days weeping almost non-stop. I was utterly convinced my husband was going to die while he was gone. I had terrible insomnia: I was up until 4 a.m. and asleep until 3 p.m. on a daily basis. Once, when he called, I cried so hard my contacts fell out. Something had to change.

When he came home, everything was OK for a while. Sure, I worried a bit too much, but I survived. Then the panic attacks started. I couldn’t breathe. I thought I was killing the baby with my anxiety, so my breathing became even more rapid. At that point, I knew that I desperately needed treatment.

At the time, my husband and I were using a midwife, and she thought antidepressants were basically poison. She kept recommending something called Electronic Freedom Technique (EFT), a so-called "healing" tool. While EFT might work just fine for those whose neurotransmitters weren't an absolute wreck, I clearly did not fall into that category, and in retrospect I found it a wildly irresponsible piece of advice for someone suffering with clinical depression.

“I don’t want Prozac,” I said. “I know Wellbutrin works for me.”

Since my midwife wasn't qualified to prescribe medication, she reluctantly sent me to her back-up practice, a nurse-midwife in rural South Carolina. I told the nurse-midwife what was happening to me and asked for Wellbutrin. I had briefly taken it in the past, and it had almost immediately alleviated my depression symptoms.

“Wellbutrin causes seizures in babies,” she said. “I can write you a scrip for Prozac.” I had read the study she was referring to — it was essentially one case report of an infant who had breastfed while the mother was on Wellbutrin and had displayed seizure-like symptoms. Yet the infant's blood levels had not been evaluated, making it difficult for researchers to determine how high a mother's dosage has to be to produce the drug in breast milk. I also knew that Prozac could potentially cause withdrawal symptoms in newborns, while Wellbutrin had no history of such side effects.

“I don’t want Prozac,” I said. “I know Wellbutrin works for me.”

The nurse-midwife made me an appointment with a real psychiatrist and told me I could ask her about Wellbutrin. In the meantime, to take the edge off the anxiety, she gave me Vistaril, an antihistamine that she said would also help reduce my anxiety. There's not a whole lot of conclusive information on Vistaril during pregnancy, though we do know that studies have linked Vistaril to fetal abnormalities in rats and small animals when taken during the first trimester. When I looked at user reviews of Vistaril online, most of them claimed it didn't work in the least; mostly, it just caused drowsiness. But it was anecdotally safe, at least that nurse-midwife thought so.

Unsurprisingly, the Vistaril didn’t help. I was about 20 weeks pregnant by the time I went to see the psychiatrist, and at this point, I was an absolute wreck. I cried all the time and I had panic attacks, which were alleviated only by slowly drinking sweet tea while my husband drove me around and talked soothingly. I immediately asked for Wellbutrin.

“It causes seizures,” the doctor said. “Both in babies and in breastfed babies. And you say you want to breastfeed.”

“That was one baby in one study,” I said.

“I don’t prescribe Wellbutrin to pregnant women,” she said flatly.

I walked out with a scrip for Zoloft, which she said she’d had great success with. If my serotonin was severely low, as she suspected, she said I ought to start seeing results in a few days.

So I took the little yellow pills. And they worked immediately. I no longer freaked out all the time. I didn’t have crying jags once a day. The panic attacks stopped. I was grateful. However, Zoloft came with the same risk of neonatal withdrawal as Prozac, which means that the baby can potentially have trouble eating and sleeping immediately after birth. I was terrified that my baby would exhibit some of these withdrawal symptoms, especially since Wellbutrin in particular was not associated with any of those risks. I felt that the doctor prescribing me antidepressants didn't make the call I thought would be best for my body and my needs, and I was angry that now, on top of everything else, I'd have to worry about my baby suffering from drug withdrawal.

Depression takes you out of your body. Your mind leads you to do things you simply can't control.

Depression takes you out of your body. Your mind leads you to do things you simply can't control, such as go on extended crying jags or have panic attacks, which can lead you to experience a basic and fundamental loss of agency. Being pregnant leads to another loss of bodily control, for more obvious reasons: there's literally another human being taking shape inside of you.

When I was pregnant and depressed, I knew that I needed help, and I thought I knew which medications would help me. Yet mental health services were focused entirely on the health of the baby, not the mental health of the mother. While I obviously cared deeply about my baby's health, I felt like I was depending on my doctors to heal me, and they weren't really making me a partner in my care so much as they were railroading me in the process of finding out "what works." They didn't listen to me or my own needs, nor did they acknowledge that I had any awareness of my own body.

In the end, when I got pregnant with my second child, I ended up on Wellbutrin in addition to Zoloft. I found a new psychiatrist who had read the research on Wellbutrin and seizures, and she felt it was perfectly safe during pregnancy. (I got lucky: none of my kids had withdrawal symptoms or any side effects from the medication at all.)

My new doctor made me a partner in my care, and took my needs into account, not just the needs of my growing baby. In the end, that's what I needed, just as much as I needed medication: someone who would give me back my agency, and make me feel like I was my own person again. I was grateful to her then, and I'm grateful to her now.