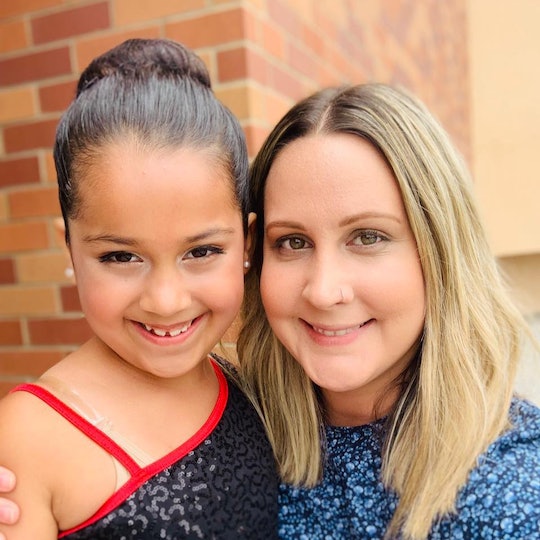 I Found Out My Daughter Calls Someone Else "Mom"

We were having a nice dinner at our friends' house when my friend leaned towards me and in a soft voice said, "I don't want to make you upset, but your daughter calls me 'mom' sometimes."

The sting of what she just told me lasted a second. I smiled and said, "Oh, that's fine."

But was it fine? I had to really think about it as my husband, daughter and I were in the car driving home later that night.

My husband and I have been friends with this couple for almost 10 years. My husband and I met the wife when they worked together at the same company. We quickly became friends. I learned they could not have children after they tried many years through treatments.

During that time, I found out I was pregnant. The pregnancy was not planned as my husband and I had just gotten married about three months prior and kids were not our focus.

The moment our friends looked into her deep brown eyes I could tell they loved her.

I first got to know our friend, who worked with my husband many years ago, when his work threw me a baby shower. My husband always talked about his co-worker buddy. Although she and her husband are older, they have similar interests and are just generally kind people.

I had a terrible first few months as I practically lived by a toilet to throw up. I was nervous and scared about this new role of motherhood. At times I felt alone.

Nonetheless, I was happy to learn I was having a girl; I always wanted a daughter. I could tell our friends were excited for us as well.

My daughter was born four weeks early so she lived her first two weeks of life in the NICU. After a few months, I felt more comfortable with her having visitors and taking her out. She was two months old when I took to our friends' house and the moment our friends looked into her deep brown eyes I could tell they loved her.

They gushed about her beautiful tan skin and her head full of thick dark hair. She was a calm yet curious baby and easy to love.

If there was one place I wanted my baby to be it would be our friend's house. It is always spotless. Although it wasn't necessarily baby-proofed at the time, it was a calm place for us to be. Our apartment was cramped and overflowing with guests and baby stuff. It was nice to take a break from it all.

I could tell our friends' immaculate home yearned for the echoes of a child's footsteps and laughter.

As our daughter got older, we felt comfortable leaving her at their house to be babysat. Our friends' views about parenting and morals were aligned with ours. We knew they were responsible people who adored our child and would let no harm come her way.

Even if she tripped in their backyard and got barely a scratch, they let us know right away.

At first, it was heartbreaking to see our daughter cry when we left. But over time, our friends made their home more like our daughter's home. She has her own designated room (she tells everyone it's her room) and she got to pick out her bedding. She has toys and extra clothes there.

Now, our friends help us out by occasionally picking up our daughter from school. I work from home so having a break from juggling work and handling homework at the same time is a lifesaver.

Our friends tell us when they're out and about, people will randomly say things like, 'Your daughter is so cute.' They just smile and don't bother explaining.

When my husband and I want to go for a rare date night, we drop our daughter off at our friends' house. She spends the night there as well and sometimes insists on it.

More importantly, I know my daughter is happy and being taken care of. We consider our friends like family now.

Our friends tell us when they're out and about, people will randomly say things like, "Your daughter is so cute." They just smile and don't bother explaining. They then started telling people they are our daughter's auntie and uncle. Our daughter calls them that. I am totally OK with it because they are more like family to us.

I understand my daughter gets confused sometimes because she acts a certain way around her mom and dad and auntie and uncle. I asked her about why she calls someone else "mom" sometimes and she said she just gets confused.

Look, I am confident enough to know that my daughter knows I am her biological mother. We share an unbreakable bond that no one can replace. But that doesn't mean that she can't bond with anyone else.

Yes, I would love to keep my daughter in a bubble and not let any harm come her way. Although I know that's impossible I rather have a small village of people who I trust around her, who I know will love and take care of her like I would.

My friend has told me several times about my daughter randomly calling her mom. Each time I tell her it's OK. I know she doesn't want to step on my toes and I do appreciate her letting me know.

Being a parent to someone is about looking after that child when you're there and when you're not — not just being called "mom." I want my daughter to know that she has an army of people who will always love and support her.