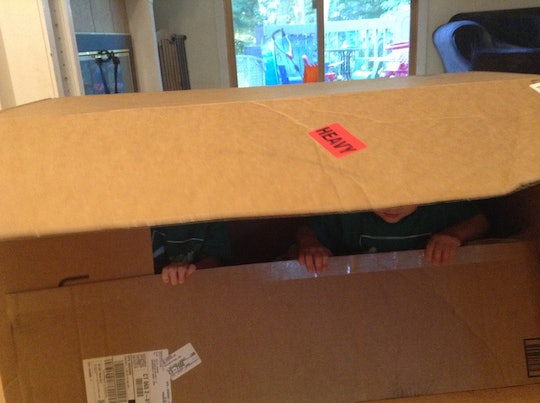 I Gave My Kids A Cardboard Box To Play With, & Here's What Happened

Most parents have experienced the unique frustration that occurs when you spend a ton of time assembling a toy for your child, and instead of seeing their face light up with joy over their said toy, your child rushes past it and into the cardboard box it came in instead. Thanks to the awesomeness that is our Amazon Prime account, I experience the obsession with cardboard box on a regular basis. I have diapers delivered to the house each month, and they come in a very large cardboard box, which has basically turned into a monthly holiday for my twin 2-year-old boys. They’re huge fans of trying to use the box as a stepping stool to access doors, light switches, and photo frames hanging on the walls that they aren’t supposed to touch. Between the safety risks and the fact that I hate clutter, the coveted giant box is typically folded and set outside for recycling within minutes of coming in the house.

But when this month’s delivery came, I decided to do things differently. As always, the kids begged to play with the box and for once, my icy heart was touched by their pleas (and OK, fine, it was raining heavily outside and I didn’t want to go back out there). So, I gave in: the box was suddenly fair play-time game. So, now what?

OK, hear me out on this one: What if toy stores are duping parents? What if the reason why kids love boxes so much is because it’s the only toy they ever truly needed? I decided this was the perfect opportunity to see what was so great about playing with a big cardboard box. I vowed to let my kids play with it for as long as they were interested, but totally expected the box to be curbside by lunchtime.

Surprise, surprise, here’s what actually happens when you let the kids loose on a giant box.

They Will Kreate Kid Kave

Turning the lights off when it’s time for bed = terrifying, but apparently plunging yourself into the darkness inside a confined space is the best thing ever. The boys loved pulling the flaps closed on themselves and then waiting for me to say, “Where did they go?” Before popping out and shouting, “boo!” at me. It was the first time since they they started walking that I can remember drinking an entire cup of coffee before it got cold, and for the record, it was delicious.

Suddenly, All The World’s A Stage

My boys love to dance around and sing, but the big box added another element to this morning’s performance.They spend at least half an hour singing and dancing atop of the box as though it were a giant stage. They were having such a ball that I couldn’t decide if I should call to enroll them in dance class or dial 911 to have EMTs on standby.

After the song and dance routine ended, they moved on to counting down from 10 and hopping off the box. While that was even scarier than the dancing, it was an admittedly impressive use of their number skills. I was surprised at how good their sense of balance was and that their gross motor skills had developed to the point where they could jump off a box without needing stitches. Although I hovered and was nervous the entire time, letting them climb on and off and seeing them caution each other to be careful helped me realize that they aren’t little babies anymore. They’re getting better at understanding how to stay safe and learning how to look out for one another.

I’m not going to let them loose on the playground anytime soon, but maybe I don’t have to hold their hand as they come down the slide anymore.

They Made A Play Kitchen, Duh!

The boys have a play kitchen that they love and use daily, but apparently I should’ve saved Santa the expense and hour of tipsy assembly on Christmas Eve night, because this cardboard box served the exact same function as their fancy plastic playset.

Completely on their own, they decided to flip the box and use to to play “cooking.” The top part of the box became the sink and stove, and the inside of the box was used for storage, baking cupcakes, and hiding. TBH, it was a pretty sweet setup. Not only did they love using the box as a play kitchen, the box is wider than their actual kitchen set, and the additional room to spread out meant there were far fewer arguments over sharing space. Score!

I try to encourage the kids to color and draw to help them learn their colors and refine their fine motor skills, and plus, it’s relaxing for me to bust out the crayons myself and let my mind wander for a few minutes. I don’t delude myself into thinking I’m raising the next Michaelangelo, because typically they’ll scribble on a sheet of paper for five minutes tops before trying to color on the floor or taste the markers.

Since we were working with only a cardboard box today, I showed them how to draw on that instead. I was surprised by how much they loved it. They spent nearly 30 minutes scrawling all over it! In fact, I was the one who called it quits, and only because it was time to make lunch. it was a good reminder for me not to give up on art in general just because they aren’t always interested. There are a million different ways to get kids to express themselves creatively, and after seeing their response to using a box as a canvas, I know I need to try other new things with them to keep their creative juices flowing.

They Made A Coffin, & I Was Kinda Cool With It

Since the kids were wholly occupied with their box, I took the opportunity to catch up on important things, like Facebook. While looking at some Halloween gifs, Jeremy came and glanced over my shoulder. He saw a scene from Hocus Pocus when the zombie falls sleepily into his coffin, giggled, and then ran over to the box to act the scene out himself.

I was pumped that they might be old enough to watch one of my favorite childhood movies, but also really surprised that he’d make the connection between a cardboard box and the graveyard. It was another really good example of how allowing the kids free play was showing me that they are capable of more complex reasoning than I realized. And it wasn’t morbid at all. In fact, it was pretty cool to watch them connect the dots.

They Built Themselves A VIP Lounge

I have no clue what was so appealing about sitting in the box while holding their golf clubs, however, the boys were happily occupied like this long enough for me to fold two baskets of laundry, so I’m not complaining and I’m definitely not asking any questions. They pitched a fit when I tried to join them in the box, but I hope it was just because they wanted some brother-on-brother time and not because I was a girl. (All my talks about gender equality and encouraging them to play with stereotypical “girl” toys better be good for something!)

So often I feel the need to supply my kids with directed activities, and as a stay-at-home parent, I have this inner voice that worries about being perceived as “lazy” if I’m not actively engaging with my kids 24/7. Giving them the space and freedom to explore the big box on their own was eye-opening in that I realized they can benefit from being allowed to entertain themselves. Not only is it fun to see what they can imagine on their own, it’s an important life skill for them to practice.

They Literally Turned It Into A Giant Lite Brite

By dinner time we were all getting a little bit bored and the box was looking worse for the wear, so I decided to call on the Pinterest gods for some inspiration. I found this awesome post of a starry ceiling in a cardboard box using a string of holiday lights and decided I, I mean we, had to experience it.

A quick rummage through the basement for some lights, a 360 in the mirror to make sure no spider stowaways had followed us upstairs, and we were in business. Poking the lights through the thick cardboard proved to be harder than I thought, but with the help of a screwdriver, some upper body strength, and channeling my frustration over the lack of coffee creamer in the house, we soon had a twinkling hangout of our own.

It was a really relaxing way to unwind after dinner by sticking my head into the box with the boys and reading to them. They were amazed by the lights and I admit that I felt a bit like a rockstar mom, even though the project took very little effort. Seeing them so happy after doing, literally, so little, made me so happy.

Having I Been Wasting My Money All These Years?

I can’t believe I’ve wasted all this time not letting the boys have their way with a cardboard box, because it was a non-stop day of fun for all of us. I’m also pretty bummed that I’ve spent so much time thinking of the extra packaging as excess, when really it’s the play thing for my toddlers. For the kids’ birthday this year, I’m tempted to take their toys out of the packaging and stick a bow on the box as though it’s an additional gift, because to them, a box really is a great toy all on its own.

While I won’t be replacing all of the toys in the house with a sole cardboard box (let’s face it, I think they’d get super bored after a few days), there’s definitely a ton of fun to be had with a simple cube of cardboard. It was amazing to see all of the many ways my kids came up with to play with the box on their own, and seeing their creativity inspired me to step outside of my parenting own routine and try some new things too. If an empty box means that I’ll be able to drink my coffee while it’s still hot, count me in.