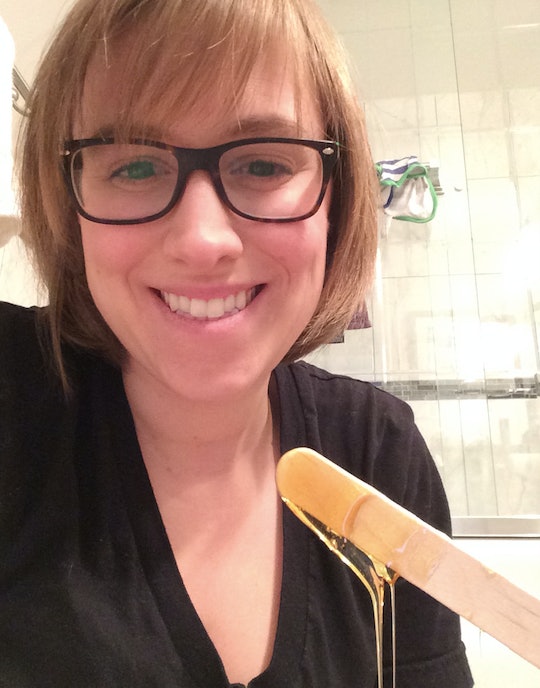 A bikini wax is like a rite of passage. I still remember my first one fondly. I was so sweaty from the pain of having the hair ripped out of my vagina and the nerves of lying spread eagle in front of a complete stranger that the aesthetician actually commented on it. Looking back, she might not have had the best customer service skills, though I guess I wasn't exactly in a position to DIY my own Brazilian wax, either. But I digress. As a feminist, I believe that the trend of the bikini/Brazilian wax exists more to benefit the patriarchal male gaze than it does to benefit a woman, but as a woman who also enjoys a particular aesthetic, and who's married to man who shares that same aesthetic joy, I've had many Brazilian waxes in the past.

After getting pregnant and then having none of the free time I used to have before I had a baby, however, my vagina is no longer receiving the careful and meticulous grooming she was once privy to. So, I decided to take matters into my own hands and DIY my own wax.

After I purchased an at-home wax that came highly recommended from a friend, the kit sat on my bathroom counter for almost a week before I worked up the courage to actually use it. It is one thing to say you're going to pluck your ladybird. It is another thing entirely to actually be the one to inflict that kind of pain on yourself, voluntarily.

Waxing has never felt good to me and it has always hurt a little bit — I mean, hair is being ripped from my body — but I can honestly say that the number of times I've felt truly horrible pain during a wax can be counted on one hand. Finally, I pulled the wax pot out of the box. I arranged the wax strips and sticks nearby for ease of access. I took a large mirror off the wall and propped it up against the cupboards. I laid down an old towel and my trusty nursing pillow in front of the mirror. Nursing pillows in my home now have three official uses: nursing, laptop pillows, and something to prop your head on while you watch yourself apply hot wax to your undercarriage. What a time to be alive.

Once everything was set up, I took a break. I made sure absolutely nothing in my home needed to be cleaned or tidied. I surfed the Internet for cat videos. I checked my e-mail. I brushed my hair. When I finally ran out of things to do, I went back and heated up my wax. I started out small with just my bikini line. I have to say, once I was done with the hairs on my inner thighs I felt like I had psyched myself out for nothing. Sure, it was a little uncomfortable. But ripping my own hair out was nowhere near as horrible as I thought it would be. At that point the baby woke up from her nap, so I had to stop. Unfortunately, I will never be one of those multi-tasking moms who can entertain her child while de-fluffing her muff.

A few hours later, my friend came over and she watched the baby so I could continue my landscaping project, where I would be focusing on, what I like to call, the Hairy Triangle. This area was a little more painful. Anyone who has had a bikini wax knows that it is important to pull the skin tight before the wax strip is ripped off. But I could never seem to get the skin on my Hairy Triangle pulled tight enough and ended up with a Triangle that was hairless but also so red and irritated that I could feel actual heat radiating off of it.

Waxing my Hairy Triangle was definitely more painful than just my bikini line, but as I got closer and closer to my pubic bone, I became increasingly more nervous and agitated. As I've had it explained to me, there are a lot of nerve endings in the pubic bone area so having that spot waxed can be particularly painful. Waxing that area myself helped me reach a completely new level of pain and surprise. My little brother is a decade younger than me and when he was a toddler he used to have the hilarious but cringe-worthy habit of walking up behind people and poking them in their bums. We all, obviously, thought he was adorable and nobody really minded getting "goosed" (as we called it) in the bum by a 2 year old, but neither did we actually look forward to being the one he goosed. The best way I can describe waxing my own pubic bone is a combination between the pain that comes with being punched in the nose and the surprise that comes with being goosed in the butt by your baby brother. You know it's coming, and you clench in anticipation. But nothing can ever actually prepare you for that moment of uncomfortable bewilderment when it finally happens.

I took a break after that as well, because my bajingo now resembled a plucked chicken and I decided she needed some time to herself before I would continue with what I knew would be the hardest part to wax. Not because of the pain involved, but because it takes true feats of flexibility and the gift of long arms, which I don't possess, in order to wax your own labia. I waited until the next day to finish thatching my cottage, which is something I would highly suggest to anyone hoping to undertake this same task. Give yourself a break. Your vagina will thank you. You will thank you. Because by day two the irritation had subsided, though after careful inspection of my previous work I found that I had bruised my pubic bone area, most likely because I hadn't pulled the skin tight enough when I'd ripped the strip off. I don't think I have to tell you that a waxing bruise on the pubic area hurts.

To wax my own labia I had to get up close and personal with the mirror, so if you are uncomfortable inspecting your gadget I suggest going in blind or trimming it instead. Though I have to say getting a good look at your own vagina is a pretty enlightening experience. Plus, if I'm going to pull the hair off of her, the least I can do is grant her the respect of looking her in the eye while I do it.

Getting the wax on my labia was the easy part. Getting it off might have been the most technically difficult thing I have ever done. First, I had to lie back on my nursing pillow. I lifted my leg up into the air and brought my arm around it, pulling the skin as tightly as possible from behind. Next, I grabbed the wax strip with my other hand and prepared to pull, while trying to see what I was doing from the reclined position and preventing my fingers from slipping on what was quickly becoming some very sweaty skin. When I finally worked up the courage to pull, it gave a whole new meaning to the term Flaming Lips. The biggest mistake I made trying to wax my labia was applying too much wax. At one point, I was sure that I had waxed my labia together and that I would never be able to pull them apart because ow. But once I got some body oil on the wax, the girls happily separated.

Traditionally, there is one more area that gets waxed during a Brazilian waxing: the bum. I am not against getting the bum waxed and I support anyone who chooses to have it done; I, however, am not one of those people. For me, personally, the anus is a dark, mysterious place that I think should be visited only for special occasions or when feeling particularly adventurous. And I believe body hair lends itself to this aura of adventure. So, I decided to leave my tooshy alone.

Waxing my own vagina was not as painful, overall, as I thought it would be, but it was much more difficult than I anticipated, both physically and psychologically. When a well trained, sure-handed professional does it, there are a lot less missed patches or random hairs left on my vag. And it only takes 20 to 30 minutes compared to the 24 hours it took me to complete. But I would still do it again. After getting over the painful and awkward bits, I was left with a — fairly — hairless vagina and a sense of accomplishment and empowerment that I just didn't get when I paid $60 for someone else to do it. And now that I know I can wax my own vagina, I'm thinking about all the other things I can wax: my legs? My underarms? Dare I try my eyebrows?

And the most important thing I learned after waxing my own vagina — other than: baby powder and body oil are my friend; the ideal hair length sits around a quarter of an inch; and, always apply wax in the direction of the hair growth and rip the opposite way — is that women who wax their own vaginas should be the people running our governments. These are the women who can make the tough decisions. They do what needs to be done. These are the women who know when to stay their hand, when leniency and mercy is best. And know when to crack the whip — or rip the strip, as it were. Who run the world? It just might be the women who wax their own vaginas.