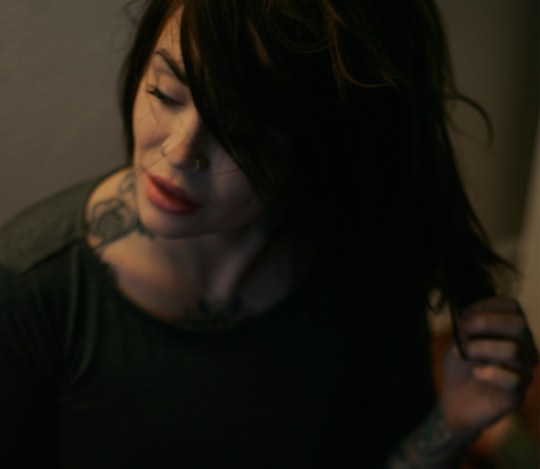 I Gave Oral Sex To My Partner To Induce Labor

If you Google “how to naturally induce labor,” you’ll find a host of articles. Acupressure massage. Bananas. Pineapple. Nipple stimulation. Raspberry leaf tea. Visualization. Yoga. Wine, even. I tried each of those things, and a few more (like giving my partner oral sex to induce labor, but more on that later). I climbed stairs. I took evening primrose oil. I took castor oil (and only birthed massive amounts of diarrhea into the toilet). I knew exactly when I had conceived my daughter, and I was 40 weeks when I really started stressing her delivery. Despite the fact that only 5 percent of mothers actually deliver on their due dates, according to the American College of Obstetricians and Gynecologists (ACOG), I was fearful of an induction or surgery, and wanted to go au naturale. I’d gained 10 pounds in what would be the final two weeks of my pregnancy, and the stretch marks appeared literally overnight. I wanted to meet my firstborn, and have my body back, and so I asked my midwife if she had any other suggestions to get this overdue baby out of me.

My husband had accompanied me to nearly all of my appointments, but for this meeting, I went alone. I remember sitting on her fraying couch, picking apart a tangerine, when she leaned forward and said, “We don’t ever tell the fathers this, because we don’t want to add pressure on the mothers… but in order for it to work, you have to swallow the semen.” Her assistant and my doula smiled quietly. If I was feeling desperate, I could test the theory that the absorption of the cervix-softening prostaglandins in semen are more effective if they’re swallowed, rather than locally applied to your cervix, by say, penis-in-vagina sex and subsequent ejaculation. Damn it.

I am pretty touchy about what goes in my stomach, and I’d rather lick my own snail trail from my underwear (and have) than swallow the load of my baby’s father. But I’d passed my original due date (Feb. 26), and I’d already eaten all of the spicy food I could find — Mexican, Thai, Chinese — drank a couple tablespoons of castor oil (only to experience the diarrhea of which I’d been warned), rolled on a yoga ball for weeks consecutively to stretch and relax my pelvic floor, walked the dogs every day, done the squats, masturbated, had the orgasms, and contractions. Hell, I would’ve jumped on my neighbor’s trampoline had I known them better. I was desperate to give birth.

I felt bad that I was so robotic in my motions, but I wanted that baby out and I think my husband was just happy to be there. I felt the tensing contractions of his scrotum, and the stirring in my uterus, I counted down: 3, 2, 1; hold your breath.

I assumed the position on the living room couch, the soft leather always served to pad my knees and waist as I leaned over the side, and I knew that he loved the view — it had been the place where I’d delighted in having my face f*cked, a couple years prior, when I was 40 pounds lighter and in a much better mood. I should also mention I was also congested due to swollen sinuses because of pregnancy, so I was feeling like the least sexy version of myself. I proceeded anyway. Good lubricant helps, and the flick-of-the-wrist right hand motion to stroke helped quicken the pace. I felt bad that I was so robotic in my motions, but I wanted that baby out and I think my husband was just happy to be there. I felt the tensing contractions of his scrotum, and the stirring in my uterus, I counted down: 3, 2, 1; hold your breath. I swallowed quickly to avoid gagging. Do it for your due date! I told myself.

We cleaned up and I brushed my teeth and washed my mouth, then I swallowed some orange juice — I didn’t want to feel the little swimmers in my stomach.

We repeated this oral sex and ejaculation exercise in the same manner two more times. And still, nothing.

In writing this, nearly five years later, I reached out to my midwife, Heather Hack-Sullivan of RoseHip Midwifery in Portland, and she gave me an update on the study behind the suggestion:

Of course there have been many comments and jokes on the internet that a man must have come up with this idea (because of the prevailing idea that women don't like giving blow jobs or swallowing). One OB said that prostaglandins are absorbed better through the stomach, but artificial prostaglandins don't seem to be any more effective orally. I still suggest it because oral sex is often more comfortable at the end of pregnancy then vaginal sex, but prostaglandins can also be used vaginally.

There’s even a compelling study published in the Journal of Reproductive Immunology about less risk of preeclampsia if you’ve swallowed your partner’s seminal fluid. Heather isn’t a jizz-hater like me, and she added with a wink, “I had my babies early and didn't have preeclampsia — just saying.”

When you are exhausted from lack of sleep and your ears ring from your little one’s crying and your nipples chafe from being gnawed on, you’ll wonder what the heck all of the hurry was about.

Looking back, I believe that my own anxiety over her birth is what kept my body from releasing my baby at an earlier date. Inherited from my own mother, I am highly neurotic and incredibly anxious. If I could speak to myself in March of 2012, I would have slept more, read more books, and taken the dogs for a few more walks. I would have spent less late-night hours scouring Google for any method of extracting the baby inside of me. In the end, I went into labor two weeks after my due date, when I was watching South Park and doing squats by the fireplace. I recognized an unfamiliar wave of clenches rippling through my body. They began in soft waves, and I fell into a trance, sure of what was finally happening.

If I could tell other women one thing, it's this: your babies will be born. You cannot stop time, but you can prevent yourself from hovering your mouse over every home remedy that entices you. What did I learn? I learned that I am still working on being a less anxious and controlling person, and that my tension exacerbated the problems of being unable to naturally ripen my babe. You would not pluck fruit from a tree before it is soft, so why would you pull a baby from the womb before it is ready? When you are exhausted from lack of sleep and your ears ring from your little one’s crying and your nipples chafe from being gnawed on, you’ll wonder what the heck all of the hurry was about. And when you celebrate your child’s first birthday, see if you can even remember what your original due date was. Trust me, it'll become irrelevant.

More Like This
How Long Does It Take For Sperm To Induce Labor?
Can Swimming Induce Labor? Experts Weigh In
What You Need To Know About Bed Rest & Oral Sex
How To Approach The Topic Of Emotional Labor With Your Partner