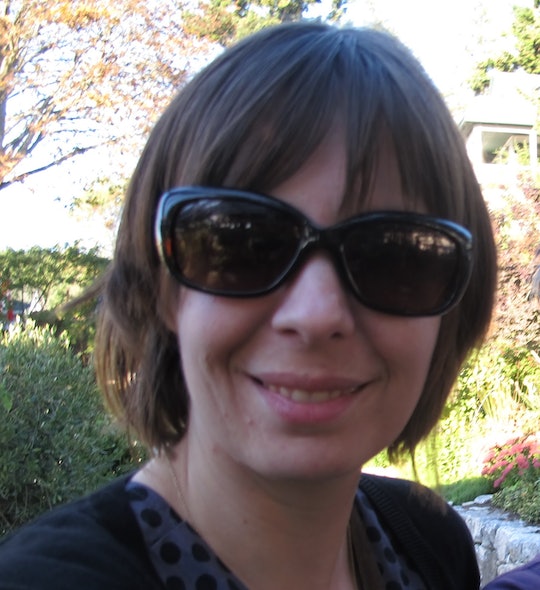 I Gave Up Dairy For 2 Weeks, & Here's What Happened To My Skin

In 2013, someone published a study meant to ruin each and every life on the planet earth. The study showed a link between dairy and acne. Almost immediately, essay after essay on giving up dairy to help your skin appeared, and it was like everything we all loved about our lives was laid to rest. People couldn’t ditch cheese in favor of a fresh complexion fast enough. Eating foods with a high glycemic index, the study said, increased the likelihood that hormonal fluctuations would be triggered. Though the link didn’t show a concrete connection between acne and dairy, I was still interested.

My face is a mess, and since I birthed a child two years ago, my hormones have been up and down, down and up; they constantly change without so much as a moment’s notice. It’s not doing my skin any favors. I break out all over: on my face, my chin and throat, below my nose, and occasionally on my forehead. When it’s bad, I’m embarrassed to go out. I hope that I don’t run into anyone I know. I get reluctant to take pictures. One night, I took a very cute picture of my family, except that I look terrible, but I don’t want to be one of those people who deletes every picture because of how they look. I don’t want to feel shy about meeting new people, or posing for a photo. To make matters a bit more pressing, my brother’s wedding is coming up in a couple of weeks, and it would be kinda nice to feel good about the professional pictures that will hang around for like, you know, ever.

It was time to try something new. According to Dr. Google (an expert in some ways, but not an especially wise one), one way to thwart hormonal acne is to abstain from dairy. I’ve been told this by aestheticists before, but I brushed it off. I like cheese. I love yogurt. And it’s a big part of my vegetarian diet. But things were getting bad, so it was time to make a leap and make a change.

For two weeks, I stopped eating dairy. At the end, we’ll see if it helped my skin. Here’s what happened:

Week One: Here Goes Nothing

Lately, I’ve actually been eating these really good frozen yogurt bars every night after my toddler goes to bed, but I guess they’ll just have to chill in the freezer for a few weeks. As I dig around, I find an almost-whole pint of coconut-based non-dairy ice cream in there, leftover from a birthday party a month ago. I serve myself a big bowl with fresh strawberries sliced on top, and feel the opposite of deprived. It’s not ice cream, but it’ll do. I realize that I can’t overcompensate and give myself a billion “little treats” to make up for for missing out on cheese with my crackers. And sugar isn’t great for your skin either, from what I’ve read. Still, that pint didn’t last long.

I thought it’d be difficult to cut dairy entirely from my diet, but it turns out that it’s easier than I’d thought, both from a culinary and a nutritional perspective. Instead of snacking on cheese with my crackers, I used hummus instead. It wasn’t not quite as delicious, but it worked. Instead of cheese in my burritos, I caramelized onions and added avocado and hot sauce; I didn’t even miss the cheese.

There were a few times I was caught out in public without a handy snack, I live in Portland, for crying out loud; I can head to the supermarket and grab a vegan muffin to-go any day of the week. I’m not exactly at a loss for food choices here, and for that, I’m fortunate. I even got a slice of vegan pizza for dinner at the hip pizza place, and it ended up being pretty tasty.

As the week went on, nothing particularly heinous was happening with my skin. A few little breakouts here and there, but nothing particularly inflamed or angry. It’s kind par for the course so far. It’s my usual skin, no more, no less, which means plenty of bumpiness along the jawline and a breakout every few days.

Week Two: More Of The Same

It’s hard to tell if this is just the monthly wave of hormones giving me a moment of respite, or if my face actually looks a little bit better because I’m not eating dairy. I feel like if I had a big event today, I’d be comfortable using only a little BB cream with concealer and just rocking it like, yeah, check me out, maybe I have a little uneven skin tone, but whatever, pal! I’m still hot! For better or worse, I usually have a week like this every month, so I’m not sure if I can truly thank my no-dairy experiment for this.

A few days later, though, I stopped feeling so confident. When I washed my face, my chin felt irritated, like it was waiting to break out again despite my noted cheese deficiencies. Nope, no dairy had been consumed. I felt frustrated and wanted to throw in the towel on the experiment in general, and I really wanted to treat myself to a bunch of chocolate. I know the chocolate wouldn’t have solved the problem, but snacking on something that I love would’ve made me feel good. Instead, I put on some zit cream and apologized to the pillowcases.

At the end, I look about the same as when I started: No better, no worse. My skin broken out a few times, and it’s been pretty congested along my hairline, too, probably because I got my haircut with hair product applied. I’ve accepted that I’ll be at my brother’s wedding with a bit of a splotchy face. I buy some “photo ready makeup” and hope for the best, because that’s about all I can do at this point. I don’t feel or notice any different, either. No bursts of energy. No change in digestion. Just … a pointed lack of ice cream in my life.

Well, things didn’t magically get better in the two weeks I went without a drop of dairy in my diet. I looked and felt at the end of the experiment about the same as I did at the beginning. I didn’t even change up my meal planning that much, which is a relief when you have a family to feed and a grocery budget to worry about. French toast with almond milk tastes pretty much the same as French toast with dairy milk, and leaving the cheese off of a burrito is fine, as long as you get some other strong and punchy flavors in there. (Rice, black beans, and spinach would be pretty uninspiring, but add roasted green chilies and sweet potatoes, and you, my friend, are in business.)

It’s not a bad thing to switch up your diet a bit, but it does require you to pay more attention to the types of nutrients found in your foods. I was very careful to add more sources of calcium and protein to my diet during this time, just to be safe. But really, I should have talked to my doctor before doing it. Sometimes, things are best left to the experts: especially when trying to fix your skin. But, I’ll be honest with you: Visiting your doctor to talk about your skin doesn’t just mean one visit and a cure. It takes trying to figure out if your insurance will pay for that doctor’s visit, then taking time off work (I work for myself, so no sick time), and then worrying about taking the time and paying for any prescriptions and follow-up visits. In a day when I can barely get 10 minutes to myself sometimes, the whole idea is daunting and easy to put off.

I’ll keep paying attention to what I eat, and how it affects my health, but there’s no magic bullet to zap my zits. Well, at least no magic bullet that I know of, yet. My looks aren’t the most important thing about me, but my confidence matters. My skin matters. I matter. When I feel more confident, it probably makes my family happier, too. Going off dairy might not be the solution, but I’m worth trying to find what that might be.