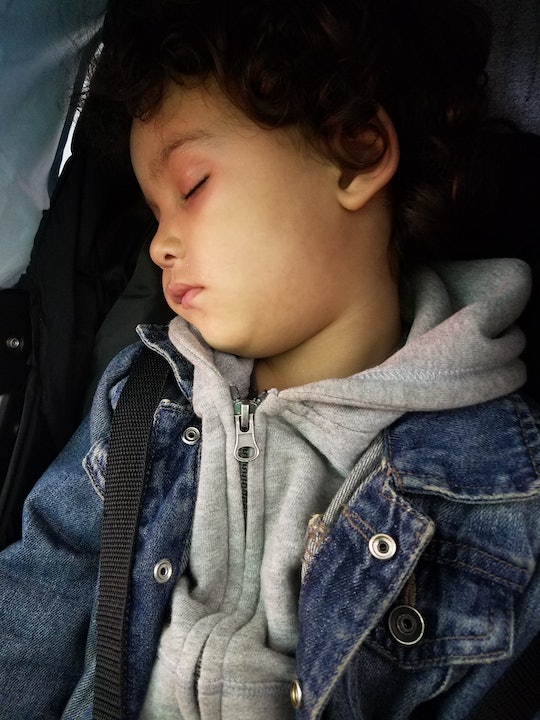 My 3-Year-Old Still Doesn't Sleep Through The Night, & That's OK

The clock on my phone shows me that it is 3:00 a.m. I have to be up for work in about five hours, and my son is finally starting to fall asleep. He's not having a particularly bad night — this is our version of normal. After I gave up on sleep-training my son, he created his own sleep schedule. He falls asleep whenever he wants (usually, no earlier than midnight) and I’m just along for the ride.

Is my son's sleep schedule unconventional? Probably. But conventional sleep-training just isn’t something that ever worked for us. The more I tried to make it so, the more exhausted and miserable I was. So I eventually just said “screw it," and I haven't looked back. He's still getting the recommended amount of sleep for his age (which is about 10 to 12 hours). He's just operating on an unconventional time clock. I like to joke that he's nocturnal, because he's up all night and asleep all day.

Right after I gave birth, people immediately started asking me how my son was sleeping. "How often does he sleep?" they'd ask. "How long? Where does he sleep? What is he sleeping in?" The questions were incessant. It started to feel like I wasn't doing motherhood right because I hadn't gotten my baby on a sleep schedule. We never did get on a sleep schedule, but this is what works for us.

When I first brought my son home from the hospital, he’d pretty much eat and sleep every two hours, which is usually the case for newborns. When he was about a month old, he started staying up for longer periods of time. I’d try to put him down to nap and he’d look at me like, “You can’t be serious, mom. I want to talk to you!”

I tried to create a routine: bath time with lavender-scented baby wash, followed by a hearty meal of boob. Then I’d turn off all the lights and pray that he’d go sleep. Sometimes it worked, sometimes it didn't. But the more I fought to get it to work, the longer he’d stay awake, seemingly to spite me. Or he’d sleep for a while, and then he’d wake me up and we’d be up for hours.

“Maybe he isn’t full enough when you put him to sleep. That’s why he keeps waking up. Give him a bottle with cereal in it," my mother suggested. But I knew that he was eating plenty, and I wasn’t willing to mess with his gut health by giving him cereal. He just wanted to sleep when he wanted to sleep.

I spent countless hours Googling for answers. A nurse at his pediatrician's office suggested I try a white noise app, so I did. But that didn't work. Then a friend sent me one of those Halo sleep sacks to swaddle babies, but those only worked during the day, not at night. I was so frustrated. I felt like I was banging my head against the wall.

Once, at my mother's suggestion, I tried putting my son in his rocker and leaving him in my dark bedroom with some music on. All I could hear was his wailing. I don’t believe in cry it out, so I went in the room to hold him. The only thing that helped him sleep was lying on his belly. I knew that was against American Academy of Pediatrics (AAP) recommendations, but that's what worked for him.

I thought that since he wasn't sleeping through the night by 6 months, I had clearly failed as a parent.

But even when he slept on his belly, which allowed him to sleep for longer periods of time, he'd still want to sleep and wake up on his own schedule. The more I pushed him to go to sleep, the more he pushed back. The kid had nerves of steel.

As he got older, I felt terrible when I heard my friends brag about how well their kids slept. I never talked about his sleeping habits. I thought that since he wasn't sleeping through the night by 6 months, I had clearly failed as a parent. So after almost a year of trying to get him to conform to other people's idea of what a good sleep schedule was, I just threw my hands up and called it quits.

When I told other moms that my son didn't have a sleep schedule, they would be aghast. "But how do you get anything done?" they'd ask when I said he slept through the morning and woke up at night. We get plenty done. Sure, we may miss a morning toddler playgroup, but we have plenty of time to do other things later in the day if we want. No one wanted to hear that I just let my son do things on his own time. He naturally developed his own circadian rhythms and I just went along with them, adjusting my own schedule accordingly.

My son is 3 and a half years old now, and he still doesn't always sleep through the night. Sometimes, he wakes up a few times at night, and I have to nurse him or cuddle with him to get him back to sleep. But that's not that abnormal for his age. When he goes to school, we'll adjust his schedule. But until then, we're doing what works for us.