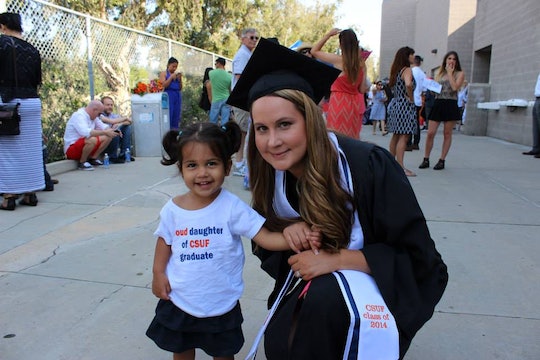 My parents didn't foot the bill for my college education — I did. And to top it off, I found out I was having a baby while I was finishing school. I am in a shameful amount of student loan debt, over $50,000 to be exact. I know that is an outrageous amount to some and only a fraction for others, but I was terrified that I was about to have a kid who I want to send to college some day while I was still finishing college and accruing debt.

I didn't plan on having a baby while I was going to school, but it was my dream to get my Bachelor's Degree and having a child was not going to stop me.

I had a steady job at a bank before I went to a state college. I had previously taken community college classes and got my associate's degree, but I wanted more. I wanted that tiny expensive piece of paper with the pretty font and gold lettering. I wanted my dream job straight out of college.

I ultimately got most of that, but I also was in over my head thinking my student loan debt would not impact my family as much as it has.

I started going to state college before I was pregnant. I was engaged and about to get married. I already knew I wanted to get a degree in communications and had my path clearly set for me and what classes to take in order to graduate in a timely manner.

By this time, I had quit my job in order to solely concentrate on graduating from college. I had some money saved — not specifically for college — and figured I would qualify for Cal Grants and student loans to help me throughout the process.

About three months after I got married and started my fall semester, I found out I was pregnant. I was in shock but excited for our growing family.

I was also excited that I was able to get financial aide and loans. I was felt fortunate that I even had the opportunity to go to college, especially since it is an expensive but immense accomplishment.

I remember taking a course about parenting in the 21st century. I wondered if the required overpriced textbook should be revised to include a chapter about what to do if your parents aren't rich enough to pay for you to go college and you end up having to pay, then you get pregnant and struggle financially ever-after.

My husband and I still had expenses to pay for. My husband worked full time but we live in Orange County, California, and rent is ridiculously costly. I didn't want my husband to feel like he had to not only take care of me financially, but also our child.

I started to use my financial aid and student loans to pay for rent, bills and items for our baby. I felt remorseful that I had to resort to paying for my daily living expenses and child through student loans, which was money I was borrowing and not earning.

Should I have kept that steady unfulfilling job? I wondered. Why weren't we more careful about preventing us from having a baby so soon?

None of that mattered as I was already unemployed, spending money and time to take courses and pregnant. I ended up getting a part-time job to earn extra money. I was stressed but still determined to make everything work.

I worry about not being able to pay my student loan off in my lifetime, which at this point is a strong possibility.

I worked my ass off during that time. I was constantly working, studying and getting ready for our baby. I gave birth to our daughter, who was a preemie but fortunately healthy. I remember thinking that I was thankful the spring semester was already over by the time she arrived. Ultimately, it made me a stronger woman. I was able to establish my ability to be a student and mother. I got mostly As in my classes and even took on extra work as a staff writer and editor for the college newspaper. I felt invincible, but also broke.

I am thankful that since I was only going to school and not working, I was able to be home with my daughter for the first few years of her life. I was able to stay on my graduation path by taking online courses while caring for my daughter and being able to learn how to be a mom.

After a few years, I was able to graduate from college and the best part was having my daughter in the stands watching me get my diploma.

What I didn't know at the time was that after I graduated and started my measly paying job in my field, that my husband's income counted as my income, for purposes of student loan repayments. The monthly payments were more than I could afford.

We miss out on certain tax breaks that married couples get when filing together but it's either pay rent and not my student loan, or be able to pay for both.

I worry about not being able to pay my student loan off in my lifetime, which at this point is a strong possibility. I don't want to place any burden on my family. I don't want my daughter to think her mother wasn't responsible and took on more than she could handle.

But my daughter knows I had a dream to get my degree and earned it. My parents didn't pay to get me there or to finish. And although I still haven't paid of my loans, I feel better prepared from my experience to help my daughter out when she is ready to go college.