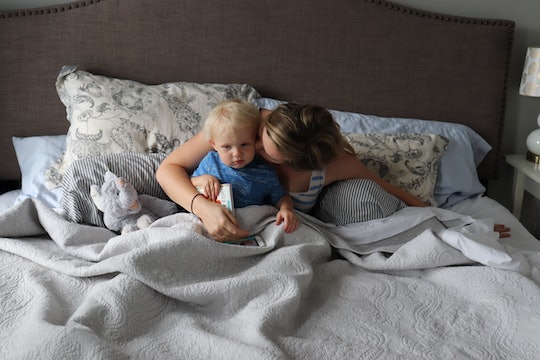 I Got Hand Foot & Mouth Disease From My Son, Which, Yes, Can Happen

In case you were wondering, yes, adults can contract Hand Foot and Mouth Disease (HFMD) too, and it isn't pretty.

Our pediatrician had just announced the official diagnosis: My son had hand foot and mouth disease. Oliver was mildly feverish, peppered with little red spots and fussier than usual, and the virus was making local headlines for spreading through the state like a plague.

I wasn’t surprised, but I did have a follow-up question. “Is it contagious to adults?” I was huddled in the corner, sweating and clammy in the air-conditioned room, weak after having spent the previous day in bed. Thanks to WebMD, I’d diagnosed myself with mastitis or the flu.

The pediatrician shrugged. “It’s really uncommon for adults to get it,” she said over her shoulder, finishing her examination of Oliver. “Most adults’ immune systems are strong enough to resist the virus. I had one dad who said he got it…” Her tone essentially called B.S. on his claims.

“It’s just that I’ve been feeling really sick the last few days, and I have a sore throat,” I ventured, trailing off.

She looked directly at me for the first time, instructed me to open my mouth, and shined her flashlight down my throat. “Yep, you probably have it,” she said, clearly surprised. “There are lesions all over your mouth.”

I felt weirdly triumphant for a moment because I finally had a name for the sickness that was currently ruining my life, and a path toward relief — until the doctor said there was no cure for HFMD.

“You’ve just got to wait it out,” she said. “Take ibuprofen and stay hydrated. Good luck.”

My throat ached, and my appetite vanished. I slipped in and out of a restless sleep.

The virus had hit me rapidly the day before, just a few days after Oliver had suffered a feverish, fussy stint of his own. (At the time, I’d just thought he was teething.) I’d woken up feeling fine, but within two hours, I was crippled with fatigue. I crawled into bed with my son, turned on Trolls, and prayed he’d drift off into an early nap. Eventually he did, and we napped together for the next few hours.

When Oliver woke up, my husband took over for the day, and I spent the rest of the afternoon alternating between freezing cold and burning hot, burrowing under piles of blankets one minute and throwing them all off the next. My throat ached, and my appetite vanished. I slipped in and out of a restless sleep. By nightfall, I was famished. I demanded chicken nuggets and popsicles, and scarfed them down, even though it hurt to swallow.

The next day was Saturday, and I awoke feeling slightly better. My throat was still aching, but my body wasn’t. I was tired, but I felt like I could walk — unlike the day before. I got up just in time to take Oliver to the pediatrician and receive my own surprise diagnosis. By the time we returned home, the kid was acting pretty normal, while I made a beeline for the bed. I got up periodically to gargle with salt water and spray my throat with chloraseptic, which made me gag. In bed, I googled adult HFMD and found horror stories about blister-covered bodies and cases lasting months. I checked my body for spots, but didn’t see any.

On Sunday, I got the text I’d been dreading from the mom we nanny share with: Her son definitely had HFMD, and he had it bad — he was completely covered in blisters. The condition is highly contagious among kids under 5, per the CDC, spread through saliva, poop (watch those diaper changes), blister fluid, and generally close contact. I looked at my own son, whose spots were mild and already disappearing, and I felt a mixture of extreme guilt and relief that his symptoms weren’t as serious.

Later that day, desperate for sunshine and exercise, we ventured out to the park, and my socially deprived toddler made a beeline for the kids at the playground. I hesitated, feeling like leper family, and quickly steered him back toward the car as my exhaustion returned in full force. I spent the rest of the day on the couch.

Within about a week, both my son and I were HFMD-free.

I felt significantly better on Monday — my energy levels were almost normal, and even my throat didn’t hurt as badly (though the sores were still there). That’s why it was a bit of a shock when I started to see a rash appear all over my legs, with a few stray dots on my face. Unlike my son’s spots, which resembled bright red mosquito bites, my own were fainter but much more abundant. My palms also looked spotty, with tiny dots accompanied by a weird tingling feeling on my fingertips, and my feet felt as if blisters were forming on the soles, although nothing was visible. I wasn’t in pain, but I was worried. Between caring for my son and catching up on work, I googled my symptoms, convincing myself that I had Guillain-Barre syndrome. I braced myself for full-body paralysis.

Later that night, the rash was gone — though my feet and hands still felt numb. Over the next few days, the rash disappeared and reappeared several times, but never got too severe or broke the surface of my skin. I was grateful for that.

Within about a week, both my son and I were HFMD-free — at least as far as I could tell. We ventured out on our first real outing since the sickness had hit, both of us thrilled to be out of the house. The CDC tells me we could be contagious for weeks, but our self-imposed confinement is officially over. We’ll both just try not to swap spit or poop with anyone for the next few weeks.