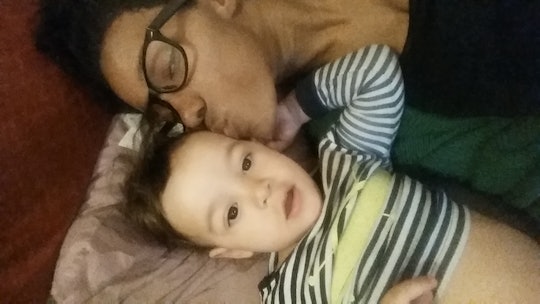 I'll Admit It: I've Gotten Turned On During Breastfeeding

I have been nursing my son for almost 4 years. During that time, I have had just about every breastfeeding-related experience one could have. By my third year breastfeeding, I figured there was nothing else that could surprise me. But apparently, I was wrong.

Sometime after my son’s birthday last fall, I began feeling what I can only describe as an odd bodily sensation while I was nursing. As I breastfed my son, I felt a tingling sensation in my nether regions, similar to the feeling I would get when I was aroused. It was weird and disconcerting, and I tried to forget about it, figuring that it was totally random. Then it happened again. And again. Soon, this feeling became a regular occurrence.

I was weirded out, to say the least. Even though I obviously wasn't turned on by the act of breastfeeding at all, because it is a totally natural and non-sexual bodily function, my body was having some sort of visceral reaction to it. At a certain point, I had to admit that I felt sexually aroused while breastfeeding, and as it turned out, I wasn't at all alone.

When I started doing some research, I realized I wasn't the first person to point out a link between breastfeeding and sexual arousal. In fact, research on the subject goes all the way back to the 1970s, when a study found that breastfeeding can produce uterine contractions, which are associated with orgasm. The milk letdown reflex also produces oxytocin, the "feel-good hormone" that is produced during sex.

As you can probably imagine, breastfeeding and sex also involve stimulation of the breasts. While my son nurses, for instance, he is often stroking one breast and touching the other. (This is, I later realized, far from uncommon.) There was a brief period when he was a nipple tweaker, but it was painful and I quickly put a stop to it.

I thought there was something wrong with me.

I think the sudden feelings of arousal came from a change in the way my son latched. As he gets bigger, it's harder for him to fold himself up in my arms the way he used to and his latch is more shallow than it used to be, so it feels different on the breast. A study from 1992 also found that the sensation can be exacerbated if moms breastfeed with their legs crossed, because that can cause the inner labia to rub against the clitoris. I've definitely found that it happens more if I sit with my legs pressed together, versus sitting with my legs crossed at the ankles and my thighs apart.

It's important to realize that the physiological response to breastfeeding is just that: a bodily response that isn't at all rooted in the brain. And it's totally normal. "The breast is an erogenous zone," Mary Jo Podgurski, a nurse, told Fusion back in 2015. "But if a woman feels anything sexual while performing a motherly duty [she might think] 'What’s wrong with me?'"

At first, that's exactly what I thought. When I started regularly feeling sexually aroused during nursing, I thought there was something wrong with me. "Maybe I'm feeling this way because it's been so long since I had sex," I'd wonder. "Maybe it's somehow manifesting itself in my breastfeeding relationship with my son." Needless to say, I was horrified by this notion.

I was devastated and feeling truly disgusted with myself.

I thought back to the time that a woman made a joke to me about whether I derived sexual pleasure from breastfeeding my then-infant son. At the time, I was aghast. Now, here I was, dealing with this horrible feeling. I was devastated and feeling truly disgusted with myself. It also made me want to breastfeed less. But as much as I tried to pull away, my son would not give up the boob. I realized that I was going to have to power through the feeling until I could FINALLY wean this kid.

Ultimately, if you experience these feelings, the biggest hurdle you have to overcome is yourself. It's so easy to think that something is wrong with you, and that you're some sort of sexual deviant because your body is having a completely normal reaction to physical stimulation. I never told anyone about what I was feeling because of the shame I felt over it. I wouldn’t even Google it in broad daylight. Instead, I'd look it up secretly on my phone at night, when I knew no one would be awake.

Even though I know this feeling is totally normal, I still have immense guilt and discomfort about it, because people who don’t experience it will never understand. There's so much stigma associated with breastfeeding, because breasts are so heavily sexualized in our culture. But women shouldn't be ashamed of a physiological reaction they can't control, nor should they be scared that it will somehow negatively affect their child. It is a purely physical reaction, full stop.

If I didn't have this platform to talk about this experience, I probably wouldn't have told anyone about it at all. But I want women to know that if they've felt this way before, they're not freaks, and they're not alone.