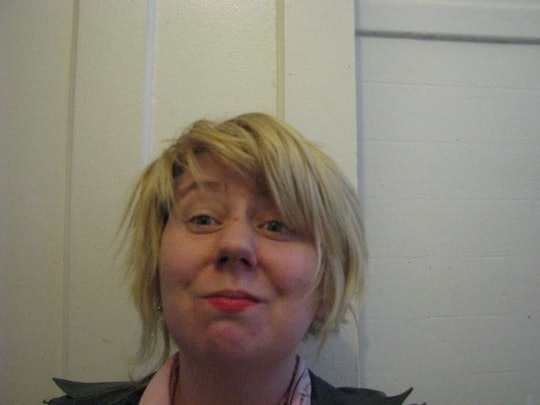 It’s generally agreed upon by parents that a big part of the reason the newborn stage is so overwhelming and so terribly exhausting is because sleep deprivation. This was certainly a big part of the equation in my case. There I was, caring for a brand-new baby for the first time ever, after a what had felt like an endless labor and birth, and on top of everything else I was jarred awake multiple times a night because my baby needed to eat and didn’t know the difference between night and day. During that overwhelming period of exhaustion, it’s common for people to tell new parents — especially new mothers — that the solution is to just “sleep when they baby sleeps.”

I think people who give that advice mean well, but it can feel empty and useless to those of us on the receiving end. Just how, exactly, are we supposed to make ourselves sleep every time our infants doze off? I was as exasperated and any new mom, but I also received a piece of advice that was far better, and far more useful, than "sleep when the baby sleeps." I didn't have an easy time after I'd given birth to my baby. In the early weeks after my child’s birth, I had multiple medical complications that made it even harder for me to care for myself, let alone a newborn. A person needs proper rest to heal, and by one-month postpartum I was healing from two separate surgeries.

When I told people how tired I was, I heard the same refrain over and over again: "Sleep when the baby sleeps.”

I did the best that I could, and my baby continued to grow and thrive, but I was definitely feeling the wear. I was physically tired all the time, yes, but I was also drained in more ways than I could possibly have imagined was possible. I loved my child, and there were days when I wanted nothing more than to gaze at his tiny face and just be with him. But there were also days where I felt like I would have given almost anything to get away.

I have a pretty amazingly strong community, and a lot of people were looking out for me, both friends and family. In that way, I was heartbreakingly, incredibly, lucky. People would ask how me and the baby were doing, and I figured rather than trying to be a hero, I would tell them the truth. And when I told people how tired I was, I heard the same refrain over and over again: "Sleep when the baby sleeps.” A couple of friends with kids only a little older than my own actually said “they say you should sleep when the baby sleeps, but I could never figure out how. If you do, will you let me know?”

The “sleep when the baby sleep” people mean well, and I’m certainly not angry with them. Intuitively, it makes a certain amount of sense. Newborns wake up about one million times a night (I counted!) and waking up with a newborn left me feeling like I'd hardly dozed off at all. The logic follows that newborns also happen to sleep a lot during the day, taking a truly incredibly number of daytime naps. Therefore, it seems to make sense that you could, at least in part, make up for your lost nighttime sleep by napping when your baby is napping. I liked this idea, in theory, and even practiced it a bit, however, new parents are actually adults, and as such have very different sleep habits than newborns, and this creates a problem.

The escapism felt like a luxury, and it also felt like acknowledging that even though I had become a mother, I was still a whole person with my own likes and interests.

As tired as I was, if the baby fell asleep right after I finished my cup of coffee in the morning, or so late into the afternoon that sleeping then would just make me feel groggy and gross, I couldn’t sleep then. Or sometimes he'd only take a half-hour nap, and it would take me that long to just get comfortable. Trying to force myself to nap every time he closed his little eyes just ended up making me frustrated, angry, and even more resentful of how tired I was.

In the midst of all of that, I received the following gem of advice from an old friend who has been a mom much longer than I have on Facebook:

People will tell you to sleep when the baby sleeps, but in my experience that isn’t always realistic. I think a better idea is to do something that feels restorative to you while he’s sleeping. Maybe that’s taking a nap, maybe that’s gazing at his sleeping face, maybe it’s getting yourself a snack, but maybe it’s reading a book or playing a video game or meditating. It doesn’t actually matter what it is, just take that time for you, because living with a baby is hard and you need it.

I’m not exaggerating when I say that this idea, which now just feels like common sense to me, utterly changed my life at the time. I put it into practice immediately. I got myself a stack of young adult fiction novels that were fun and easy to read (I didn’t feel up to anything very heavy at the time). When my beautiful little baby fell asleep, if I felt like napping, I’d go for it. But if I didn’t, or didn’t feel like I could, rather than laying in bed cursing myself for still being awake, I’d pick up a book and read about a young girl who befriended dragons for awhile. The escapism felt like a luxury, and it also felt like acknowledging that even though I had become a mother, I was still a whole person with my own likes and interests.

When we become parents, yes, we do get a whole lot less sleep. But we also get a lot less of literally everything else (well, except maybe listening to screaming and dealing with other people's bodily fluids — we get more of those little joys). And as much as we love our kids, as floored as we are by the miracle of tiny humans, we do suffer from the loss of activities that we enjoy. It's suddenly a whole lot harder to meet up with a good friend for a drink, or to watch a favorite show for the fifth time on Netflix, or to read a book. Hell, it's even harder to take a bathroom break.

I think that's why this advice meant so much to me. It was far more than just saying "oh hey, you don't have to try to force yourself to sleep, you could do something else instead." It was a reminder that I was still a human being, and still allowed to engage in self care, whatever form it took.