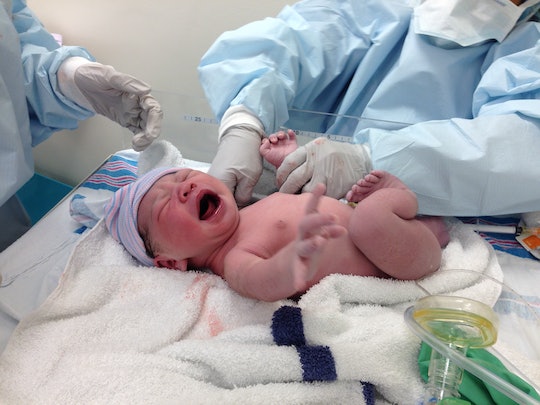 I Had A Baby, & Seven Weeks Later I Lost My Job

When our daughter was born at the end of August, I immediately had two fears as a new parent: that I wouldn't be able to protect her, and that I wouldn't be able to help provide for her. Seven weeks later, one of those fears was realized. I lost my job. Even before the layoff happened, things weren't easy. My wife had to have an unplanned C-section that ultimately resulted in blood transfusions and left her with a thick black bruise around her middle that resembled a Santa Clause belt and an incision that refused to heal. The wound was six centimeters wide and six centimeters deep with even bigger tunnels on either side.

For the past two months a nurse has had to come to our house every day to literally reach inside her incision and take out the gauze she shoved in there the day before, clean the cavity, and then re-pack it with clean gauze. And all of this has been on top of the stress that naturally comes with having a newborn, which according to a German study published earlier this year, has a worse effect on a parent's life than unemployment. And, unemployment, according to a column on Time magazine's site, is a "fate worse than death."

This isn't the first time in my career that I've been laid off. The last time was a result of downsizing at the end of the recession in 2009, and for as emotionally draining and stressful as it was, I still managed to plan and execute a pretty impressive marriage proposal wherein part of what I said to my now-wife as I knelt on one knee was:

I wanted to show you that even when things are not great, I will always give you the best I can.

Which is perhaps why losing my job this time, stings even more. My spouse has already been through this with me once, and now here we go again, only this time we aren't on our own. This time I can't wallow in self-pity and sleep for hours to avoid the depression that is too easily consuming me; now I'm a parent and a spouse, and that means putting them before myself. That means that the self-doubt and fear that I can almost feel eating me alive cannot be fed. Instead, I have to get up every morning and focus on my daughter as she smiles up at me, oblivious to the fact that one of her moms no longer has a steady paycheck. She's just happy to see me, and while that helps me momentarily forget that I don't have anywhere to be by 10 a.m., it also does little to quell the gnawing ever-present voice I have reminding me that my real job in life is to help provide for this little girl.

The first thing I did within minutes of being told the publication I worked for was being shuttered was email as many people as I could think of to get those all so important feelers out there. Maybe it's because I had been in the situation before or maybe it's because being a mom is now my first priority, but when the proverbial sh*t hit the fan, my instinct immediately chose fight over flight.

I wasn't scared and I wasn't angry; I was focused.

As the dust settled over the following weeks, though, I started getting angry and sad, with fear stoking the fire of both. I wasn't angry with the company I had worked for — I loved my job and the people I did that job with. I was angry for the hand my family had been dealt. Just when we were starting to rebound from our less-than-auspicious beginning, life delivered yet another blow. I was heartbroken for my daughter and my wife, who deserve so much better than this.

Her faith in me and in us is unwavering and absolute, and if I'm being honest, sometimes that scares me even more because it forces me to move forward in desperate hope of discovering whatever the hell it is that she sees in me.

Like many gay couples, my wife and I jumped through many daunting and expensive hoops to conceive our child. In fact, we were down to our very last vial of sperm and also at the end of my spouse's lifetime insurance limit for fertility treatments when we finally got the positive sign we'd waited so long to see. And even though, at the time, we both were fortunate enough to have insurance and good jobs, I became a bike messenger in my off-time to help offset the mounting co-pays for the countless specialist visits and fertility drugs. We literally did everything we could to make having a child a reality; which is why, during my darkest moments of self-doubt in the past few weeks, I've often found myself obsessing over how we beat such tremendous odds only to now have to worry about everything from finding and paying for more flexible childcare on days that I can get freelance work to being able to afford to move out of the city should we no longer be able to afford our rent.

Yes, we have savings, but not enough to have both our wants and our needs met for decisions that can greatly impact this first year of our child's life.

After our baby was born and my wife had to remain in the OR to be stitched up, it was just my daughter and I in the recovery room. I was holding her extra tightly because I was so afraid that I would somehow wind up dropping her. I was also scared because I had no idea how my wife was doing and why everything was taking so long. Our daughter, however, showed no fear in being held by my undoubtedly shaking arms, and she remained largely unaffected by the sound of crying newborns around us. With an incredible calm about her as she stared up at me with her huge beautiful eyes, she was in that moment, my strength and my savior. I then told her that my wife and I would always protect her, and just as I did with her mother when I proposed, I promised our girl that we'd always give her the best that we could.

I think about the promises I've made to both my wife and daughter every day, and every day I'm terrified of failing them as I continue to look for work and figure out where to go from here. I try to stay as positive as I can as I send out my resume and follow through on leads. I ask my partner (perhaps too often) if she's worried about everything from our Manhattan rent and monthly bills to my ability to find work and the stress this is inevitably putting on our marriage, and every time I ask, she insists that she's not. Her faith in me and in us is unwavering and absolute, and if I'm being honest, sometimes that scares me even more because it forces me to move forward in desperate hope of discovering whatever the hell it is that she sees in me.

For my part, I have not been able to tell her or really show her how scared I am because I feel like doing so would somehow be an admission of failure. Sure, she's no doubt recognized the signs: the weight gain, the irritability, my lack of interest in seeing people or doing things I used to like doing, but she's never once pushed me to let her in or to let her help me up. I don't know if she's learned to handle me this way because she's already steered me down the unemployment road before or because, as a new parent, she simply doesn't have time to worry about anything other than the little face that lights up whenever she looks at her. Regardless, I'm ever grateful that through all of this she's only ever acted with empathy towards me, not pity.

I recently felt myself falling into the deepest pit of despair, though. It was like everything — the fear of failure, the tremendous sadness of missing my colleagues, and the utter humiliation of the situation — hit me at once and without warning. My wife was in the middle of her incision care so I was trying to calm our baby in another room. I was singing softly and holding her against my chest. Out of nowhere, I started to cry at the exact same time her tiny fingers grasped at my shirt collar; it truly felt like she was reaching down into the darkness and pulling me into the light.

I held her as tightly as I had in the recovery room, and she settled against me with no idea that she had once again been my much needed strength. I knew in that moment, even though I am terrified for what the future holds, that she and her mom make up the best parts of me and while I may stumble, there's no way I can fall.