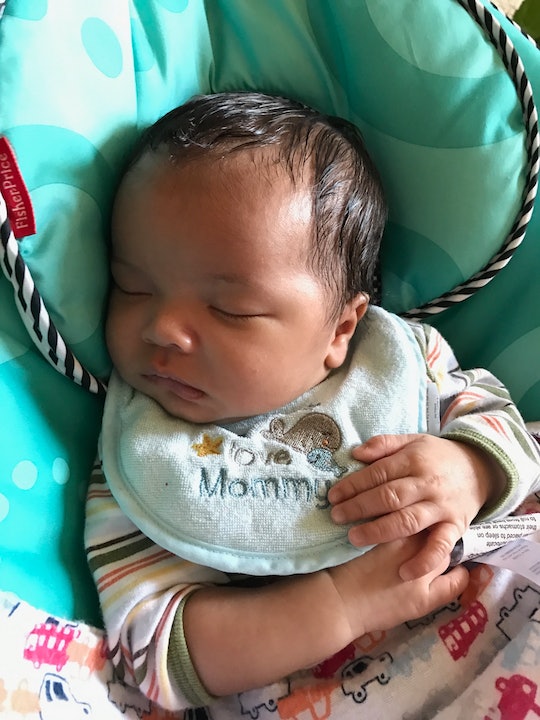 My Gentle C-Section Was Awesome

When I was pregnant with my fourth child, my doctor told me I had an important decision to make: I could have a vaginal birth after a cesarean (VBAC), or I could have another c-section. At first, I was fairly sure I knew what I wanted to do: I had delivered my twins via c-section and it was a traumatic experience, so I didn't think I was willing to go through that again. But since I was only having one baby this time instead of two, I figured maybe this experience would be different. So I opted to have a gentle c-section, and it was the best decision I've ever made.

A gentle c-section, also referred to as a "family-centered" c-section, is when the procedure is more centered around you, the mother, and your partner. The delivery is sometimes slower and more gradual, allowing the baby's chest to be squeezed out to get rid of all of the fluid, just like a vaginal birth. Unlike a regular c-section, in a gentle c-section the doctors don't strap your arms down, and you're allowed to hold your baby sooner. You can also opt to be less sedated so you can be more alert during your first few moments with your newborn.

When I was pregnant with my twins, I thought there was a possibility that I would be able to have a vaginal, drug-free birth, especially because just a month before I was due, a friend of mine was able to give birth to both of her twin daughters vaginally. Unfortunately, at an appointment with my doctor, I was told that both of my baby girls were breech, and he thought it would be safer to deliver them via c-section.

I was afraid, because I didn't know what to expect. I read my pregnancy book and a c-section didn't sound too bad, but the fear of the unknown kicked in. What if something went wrong? Many years of watching shows like ER and House always prepared me for the worst. I was afraid that I would lose too much blood, or that something would be wrong with one, or both, of my babies.

A c-section didn't sound too bad, but the fear of the unknown kicked in. What if something went wrong? Many years of watching shows like ER and House had prepared me for the worst.

When it was time to give birth to my twins, the doctors told my husband that he couldn't come into the operating room until they were done with their prep. That frightened me from the get-go, because I was already having anxiety and I knew my husband could keep me calm if I needed him to. Once they got me into the operating room, there were two teams of nurses and doctors for the babies, none of whom I had met before. They laid me down on the operating table and strapped my arms down. I'd read books about giving birth and knew what they did during a c-section but nothing prepared me for how uncomfortable I would feel about having my arms strapped down.

I felt like I was at the mercy of everyone around me. I became even more overwhelmed when my husband came into the room with a mask over his mouth. He didn't look like himself, and by the time my doctor came into the room, I was desperately trying to keep myself calm.

Once my doctor got my first twin, Mia, out, I felt relieved. 2 minutes later, Laila entered this world. I saw them both for a few seconds, then they whisked the babies out of the room. As my doctor congratulated me, she went on to the task of finishing the surgery. All of a sudden, I started feeling like I was going to throw up. The next thing I knew, I felt pulling and pushing on my lower body. I felt no pain, but the sensation was strange nonetheless. I started crying and asking them to unbind my hands. I was in a full-on panic attack.

The next thing I knew, I was waking up in a hospital room. I was told that the babies were in the nursery and I could see them soon. I then went back to sleep. Once I woke up a few hours later, I still felt groggy, but I was able to go in a wheelchair to the NICU to see both babies. I hadn't seen them since they were born, and now I couldn't even hold them because they were both in incubators.

Giving birth to my son was an entirely different experience. Because I told my doctor what had happened when I had my twins, she assured me that she wouldn't let me have an anxiety attack on the delivery table. She also assured me that with a "gentle" c-section, I would be able to focus on my time with my new baby. I also wouldn't have to have my arms strapped down, and I could hold and breastfeed my son right after his birth. I trusted her, so I agreed.

I was so relaxed that the process seemed to go by quickly.

When the day came, of course I was nervous. "You'll be fine," I told myself. "It's a different doctor with a different hospital." This time, I had a nurse hold my hand during the procedure. Once the spinal block was in, they laid me down on the operating table and my husband came right in. They put the sheet up and told me to extend my arms, and thankfully, no one strapped me down.

When I heard the doctor say, "Get ready to meet your son" and heard Kai's first cry, I was in a state of disbelief. I was so relaxed that the process seemed to go by quickly. My doctor held him up, said, "He's here" and then the nurse said, "Hold your arms up so you can hold him". I was shocked, but I was also ready to hold my little boy. Holding him felt magical.

After they took Kai out of the room, my doctor kept me calm through the last stage of my surgery. I started feeling anxiety creeping up again. My breathing became heavy. and I felt as if I was going to cry. Just the sensation of knowing what was going on on the other side of the blue sheet divider freaked me out. I told my doctor that I didn't want to be anesthetized, which had happened during my last c-section. I knew I had to be mentally present for my son. My doctor started telling me a long list of bad jokes to calm me down, and I laughed the whole way through. The next thing I knew, I was being rolled across the hall to see my baby.

I understand that not everyone's experience will be the same, but I'm glad that I had such a serene, happy, and wonderful experience bringing my son into the world. I got to hold him right away, and after the surgery was finally done, I was able to be with him the entire rest of the time in the hospital. I loved that my gentle c-section was more centered around my comfort, and most importantly, it was what was best for my baby.