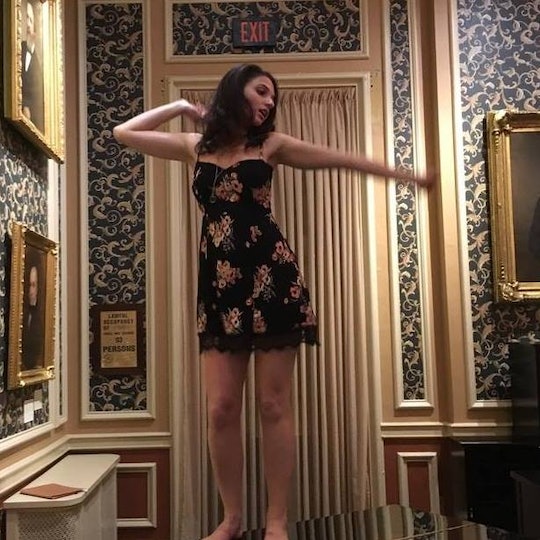 Yeah, Having A Medicated Birth Makes Me Amazing

I was about five months pregnant and at a dinner party when I found myself sitting next to Polina* (not her real name), the mother of a 3-year-old child. Polina was Icelandic and tall, blond, and willowy in the way that only Icelandic people and the members of Taylor Swift's crew are; she had an MFA in short fiction and was improbably pulling off a dashiki and her child had a hip Icelandic name with no vowels in it. In short, she was intimidating, and when she told me the story of her birth experience (as seasoned moms are wont to do when they're seated next to visibly pregnant women at dinner parties), I was even more cowed.

"I gave birth to Byrgtt (or Fjstr, or Svøp, or whatever her child's name was) in a warm pool at an Icelandic birthing center," Polina told me. "I was in totally unmedicated labor for nearly 16 hours. It was an incredibly intense experience, but I remember looking down after I saw her come out in the water and just feeling this overwhelming sense of euphoria."

"I mean, I haven't really thought about it," I said. "I just know I want to be in the hospital, and I plan on being drugged up to the gills. I don't really have a high tolerance for pain." Polina looked at me as if I'd just told her that I intended to feed my child a steady diet of Goldfish crackers and black tar heroin. "Oh, OK," she said, and changed the subject to Byrgtt or Fjstr's or Svøp's first steps.

While Polina was perfectly polite, I can't say I was totally surprised by her response. While I faced a fair amount of judgment for my decision, I ended up having a medicated birth — and even though I totally respect women who go the drug-free route, I'm pretty proud of my decision.

Throughout my pregnancy, whenever I told people I wanted to have a medicated birth, the reaction would fall into one of two camps: they'd either say, "good for you!" and tell me about how they were so zonked out during their own labor that they watched an entire Real Housewives marathon; or they'd try to convince me to do otherwise, with an intensity that made me think they had some sort of financial interest at stake.

"Epidurals have been known to slow down labor," they'd say (which is somewhat true, to the extent that they slow down contractions), or "epidurals have been linked to serious health risks for the baby" (which is not). I was told that having an epidural would reduce my chances of bonding with my baby, because I'd be so comatose when he came out that all I could do was smile and drool on him; or I was told that by opting for drugs during labor, I was supporting some shadowy hospital industrial complex. "Haven't you ever seen The Business of Being Born?," people would ask me. I was recommended that f*cking movie so many goddamn times that I wouldn't be surprised if my friends were secretly getting paid by the production company to promote it.

None of this changed my mind about my birth plan: I know myself and my tolerance level for pain well enough to know that a drug-free birth wasn't for me, and I saw no reason to go through excruciating pain and discomfort if the miracles of modern science had another option for me. (Plus, I totally agreed with comedian Jessi Klein's New York Times article on the pressure to have a so-called "natural" birth: "It’s interesting that no one cares very much about women doing anything 'naturally' until it involves their being in excruciating pain," she wrote.)

I refuse to allow myself to feel anything short of pride in my birth experience, however medicated and "unnatural," and a byproduct of the industrial hospital complex (whatever the hell that means) it might have been.

It did, however, lead me to wonder why people were so invested in my choice to begin with, or why there was such pressure to have a tightly controlled birth plan to begin with. I had always assumed that childbirth was just a biological phenomenon that gripped your entire body with little warning or notice, like puberty or uncontrollable diarrhea. You were lucky if you got out of it, if not alive, at least with your dignity semi-intact. Yet everywhere I looked, there were women like Polina, who had planned their perfect birth experiences down to the T, complete with controlling the temperature of their all-natural mineral water-filled birthing pools.

Am I missing something by not having a "natural" birth, or by not caring about my birth experience at all? I wondered. Does it make me less of a woman if I'm stoned throughout my entire labor? Will it make me less of a mom? I must admit that even though I never really considered changing my birth plan, the latter question started to nag at me.

As it turned out, I didn't really have much of a choice either way as to whether or not I'd have an unmedicated birth. I ended up scheduling a c-section when I was 7 months pregnant, because my son was breech and the position of my placenta made me an unlikely candidate for version (or repositioning the fetus in the womb). After he was born, I was later told that his umbilical cord was too short for him to turn on his own.

Additionally, I was right about childbirth being a force totally beyond anyone's control: I went into labor when I was about 36-and-half weeks pregnant, at 4 a.m. after I woke up in a pool of ambiguous clear liquid. Thinking that I might have peed myself, I told my husband we should change the sheets and go back to sleep, at which point the fluid started gushing between my legs like a waterfall in a Bob Ross painting. We took an Uber to the hospital and by the time I got there, my contractions were about a minute and a half apart; I gave birth to my son two hours later.

As I'd anticipated, I felt absolutely no pain during my c-section; there was one split second where I felt someone poking around my insides, but it felt more like my stomach was a handbag and someone was rummaging around looking for their lighter than anything else. (My OB-GYN later told me that at that moment, she was literally putting my uterus back into my body, which is standard for a c-section.) I credit the lack of pain both to my amazing birth team and to the anesthesiologist, who I repeatedly called a genius during the surgery in between telling him that my mouth tasted like green.

I've only been a mother for a few weeks at this point, but I've already learned that whether you opt for medication or not during labor is ultimately moot, because becoming a mother is ultimately about pain: the pain of postpartum recovery, when you can't do so much as poop without screaming bloody murder; the pain of your child when he cries while he's getting his diaper changed, even though you know you're not hurting him and he's just being a little p*ssy; and the pain of knowing you've brought a precious little life forth into a dangerous world.

Although I had a totally pain-free, medicated birth, that's not to say that I didn't feel any pain at all during the entire process. I had contractions for a few hours, which were, in a word, garbage (I'd liken them to the worst period cramps you've ever had, times 100), and my recovery process was incredibly painful; for weeks, it felt like someone was stabbing me in the gut whenever I coughed, sneezed, or got up to pee. My postpartum recovery left me in an incredibly frail state, teaching me once and for all that just because a woman opts for drugs during labor, that doesn't mean they can avoid pain altogether.

It's for that reason and that reason alone that I refuse to allow myself to feel anything short of pride in my birth experience, however medicated and "unnatural," and a byproduct of the industrial hospital complex (whatever the hell that means) it might have been.

Regardless of your level of pain tolerance, childbirth is likely the most intense experience a woman's body will ever go through; not just the process of labor itself, but the aftermath as well. There is no way you will come out of that delivery room the same person you were before, both physically and emotionally: not only will your body be utterly wrecked, but your sense of self and your priorities will be totally rearranged as well, like pieces in a giant puzzle (or like your reproductive organs during a c-section, as I learned firsthand).

I've only been a mother for a few weeks at this point, but I've already learned that whether you opt for medication or not during labor is ultimately moot, because becoming a mother is ultimately about pain: the pain of postpartum recovery, when you can't do so much as poop without screaming bloody murder; the pain of your child when he cries while he's getting his diaper changed, even though you know you're not hurting him and he's just being a little p*ssy; and the pain of knowing you've brought a precious little life forth into a dangerous world from which you can never really protect him, no matter how many rear-facing car seats or belted diaper changing tables or suffocation-proof bassinets you buy.