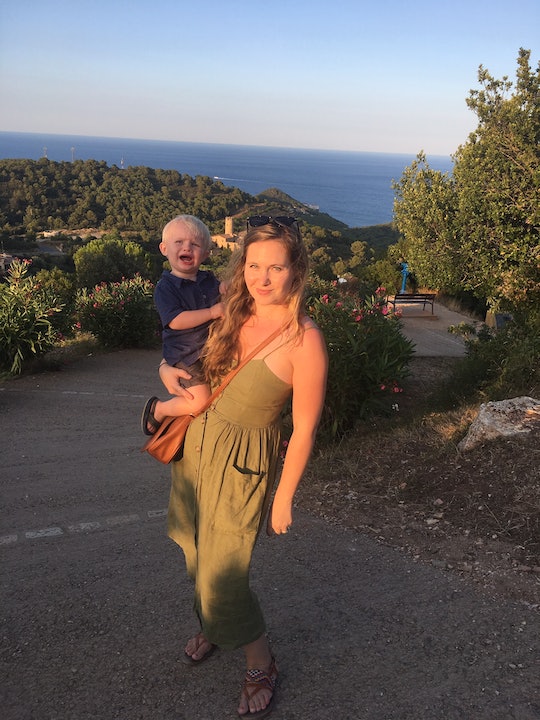 I Had A Miscarriage On Vacation — & Yes, It Ruined Everything

I’d imagined just about every nightmare scenario before a six-week trip to Spain with my husband and toddler. From inconsolable screaming on the flight to a fire in our medieval-era Airbnb, I’d considered it all and thought I was ready for anything. What I didn’t imagine is that I’d learn I was pregnant soon after arriving in Barcelona, and that I’d miscarry while still on vacation a few weeks later.

We were a few days into our trip when I started noticing some familiar symptoms that had me joking about picking up a pregnancy test: Breakouts on my face, nausea in the morning, and fatigue that made it nearly impossible to resist an afternoon siesta. I started to feel guilty about the piles of jamon I was eating (not to mention the wine), and sent my Spanish-speaking husband to the farmacia for a pregnancy test. Just in case.

Of course, the instructions for the test were in Spanish, and I somehow managed to screw up peeing on the stick, so I went back the following day to pick up another test. I blankly scanned the shelves in the farmacia, then Googled “how do you say pregnancy test in Spanish” on my phone before awkwardly asking the pharmacist for a “prueba de embarazo.” He pulled a few options out from under the counter, and I chose the most American-looking box before shoving 15 euros over the counter.

Back in our little Airbnb bathroom, I watched in shock as “embarazada” popped up on the test’s little screen. I cried, my husband scooped me into a bear hug, and we danced around the apartment with our son, who found the whole thing hilarious.

My fatigue made it hard to do much after dinnertime, and some nights I didn’t even feel strong enough to leave the apartment.

The next few weeks were bittersweet as I balanced the joy of early pregnancy with first trimester symptoms that got more challenging by the day. A near constant feeling of nausea made it difficult to enjoy the Spanish specialties I’d so looked forward to eating, not to mention everything that was now on my forbidden foods list. My fatigue made it hard to do much after dinnertime, and some nights I didn’t even feel strong enough to leave the apartment. After a few weeks, I was craving the comfort of my own bed and family and familiar foods — and I desperately wanted to visit my OB to make sure everything was OK with the baby.

We had 10 days left in Barcelona when I awoke to a sharp stabbing feeling in my abdomen. I emailed the first English-speaking OB-GYN I found on Google, and quickly received a response saying they could do an exam and ultrasound that morning for 250 euros. (It goes without saying that my health insurance plan did not extend to Spain.) I made the appointment, and a few hours later I was in the back of a cab with my husband and son, headed toward a hospital on the outskirts of the city.

The cramping had subsided, and I started to feel hopeful, telling my son we were going to get a picture of his new brother or sister. As we walked into the hospital, I was comforted by its familiar sights and smells, and then by the American accent of the doctor’s receptionist and the Northwestern University degree hanging on the wall. I was soothed by the familiarity of the hospital gown I changed into, the stirrups where I rested my feet, the ultrasound machine I’d gotten to know so well during my first pregnancy.

With my husband standing beside me, our son in his arms, the doctor slipped the ultrasound wand inside of me, but remained quiet. “I see the fetus,” she said finally, then paused. “What I don’t see is a heartbeat.”

I hated her in that moment for phrasing it just that way, as if for dramatic effect. I didn’t believe her, and I waited for her to keep searching, but she turned the screen toward me and pointed out a tiny mass of cells that even I could tell had never had a chance of becoming a baby. Based on its size, and my dates, she said its heart had probably stopped beating weeks before.

I knew that if I had a choice, I didn’t want to miscarry in an unfamiliar place an ocean away from my home.

Back in the doctor’s office, I willed myself not to cry as she laid out my options, recommending that I return home early in case of complications. While I might start miscarrying naturally within a week or two, she said, I might also require a D&C (dilation and curettage), which would cost close to 2,000 euros in Spain without insurance.

I held in the tears in the cab back to our apartment, while my husband and I discussed whether an emergency flight home would be worth the expense. I held them in as we rode the elevator up to our flat, and then finally let them go as we walked through the door. I cried for a few minutes, curled up in bed, and then I stopped. When I realized another wave of tears wasn’t coming, I got up and tried to force myself to think practically.

I knew I was lucky to find out so early, before my pregnancy had evolved into anything resembling a baby. I knew there was a reason things had stopped evolving, even though it was impossible to find out what that reason was. And I knew that if I had a choice, I didn’t want to miscarry in an unfamiliar place an ocean away from my home. So we booked our journey back the following day.

Four flights over the course of 30 hours with a toddler in tow would terrify most people, but it was nothing compared to my fear of miscarrying while 35,000 feet in the air, hours from landing. It was a chance I was willing to take to get home before anything happened. I rushed to the bathroom at every layover, checking for blood, relieved to find nothing.

Safely home, I felt happy and relieved, but steeled myself for the trauma of passing the fetus, and with it likely another wave of heartache. I avoided friends eager to hear about our trip, wondering why we’d returned early. I avoided work, instead focusing on my son and the simple comforts of menial, everyday tasks at home.

I realized that I just might not miscarry at all.

Nearly a month after the miscarriage was identified, I once again sat in my doctor’s office as she asked me how I felt. “I still feel completely normal,” I answered, as had become routine. But I didn’t. I felt like my body was damaged, broken, like I couldn’t move on until I’d expelled the remains of my failed pregnancy. I felt alone, but I didn’t want to see anyone who might expect an explanation of this weird state I was living in: pregnant with a dead fetus. “The waiting is starting to get to me,” I finally admitted to my doctor. She scheduled my D&C for the following week.

As my surgery approached, I kept hoping for the cramps, the bleeding. I realized that I just might not miscarry at all, instead having my uterus scraped out in a quick, routine, elective procedure that, I found out the day before, would cost me around $4,000 after insurance. It didn’t escape me that it would have been cheaper to have the surgery in Spain, and to have been done with it all weeks before.

Luckily for my bank account, if not for me, I started cramping heavily the day before my procedure and miscarried “naturally,” in my own bathroom, within the span of just a few gut-wrenching hours.

I still cringe just a little bit when people ask about our epic adventure to Spain. I find it hard to look at the pictures, as incredible as the experience was. Because when I see pictures of myself from the trip, they’re all defined by a very distinct moment: Before I lost the baby, and after I’d lost hope. I tried my best to smile through it, and I still do, but — for a while, at least — I prefer to do it from the comfort of my home.