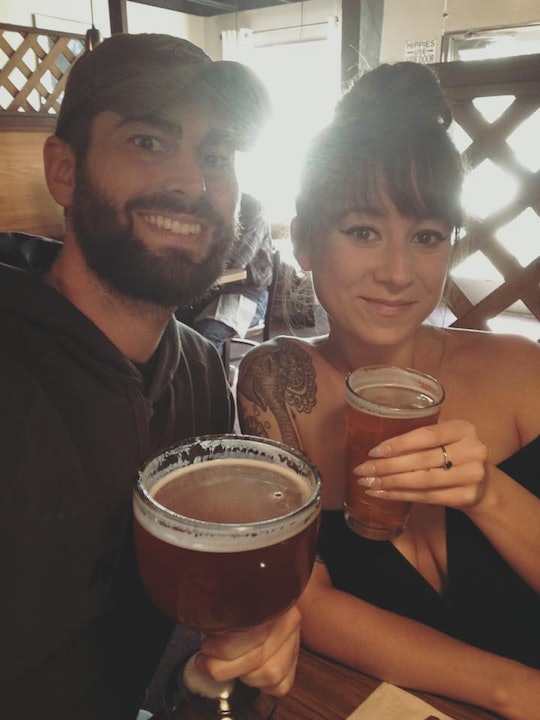 I knew something was wrong that morning. The cramping I had felt two days prior had intensified, and morning sickness was non-existent. So, really, I didn't need to take the 20-minute train ride to the OB-GYN's office to confirm that I was experiencing my third miscarriage. In fact, a big clot of blood collected in my underwear as I walked the two blocks from the subway station to the doctor's office. Perhaps that's why I didn't have the reaction I could tell the physician was looking for when he told me my womb was empty. I had seen the black and white ultrasound picture already, in my mind.

I could change how I viewed the vanishing of my plans for a second child — for my son's first sibling. And, for me, that meant celebrating the freedom that comes with not being pregnant anymore.

But days later, when the pain was at its worst and the bleeding at its heaviest, I did have a reaction, and it surprised me. Instead of laying in bed all day, watching The Office in silence as tears stained my sheets, I decided I wanted to throw an intimate party of sorts. I wanted to celebrate not being pregnant, by doing everything I had planned on avoiding for the 40 weeks (more or less) I had thought I was going to stay pregnant. And while there are a wide variety of ways to feel about a miscarriage, from guilt to sadness to relief, there's a universal response to this common, biological outcome of conceiving: resignation. Because there's nothing you can do but endure the pain, the bleeding, the disappointment, and the inconvenience of a pregnancy loss. Or two. Or three. There was nothing I could do to change the fact that I now had to ignore the prenatal vitamins sitting on the kitchen counter, or put away the anti-nausea candies I bought for morning sickness. But I could change how I viewed the vanishing of my plans for a second child — for my son's first sibling. And, for me, that meant celebrating the freedom that comes with not being pregnant anymore.

I was going to wear my favorite, arguably too-tight dress, proudly.

So I asked my partner to walk to the nearest liquor store and procure a bottle of whiskey, my drink of choice. I had planned to abstain from alcohol for the entirety of my pregnancy, as I did when I was pregnant with my son. But as another wave of debilitating cramping hit me, I remembered that I no longer had to. I wasn't growing another body inside my own, so a Jack and Coke, or two, would mark the beginning of my miscarriage party.

Then I started rummaging around my closet in search of a tight, short, low-cut black dress that I, admittedly, started missing the moment I held that positive pregnancy test in my hands. After a few minutes of silent cursing, and promising myself that this year, definitely this year, I was finally going to get rid of all the clothes I no longer wear, I found my stereotypical "little black dress" and, for the first time in three days, smiled. It didn't matter that it was December and the weather undoubtably called for something warmer. I was going to wear my favorite, arguably too-tight dress, proudly.

Uncooked seafood and rare or undercooked beef or poultry should be avoided because of the risk of contamination with coliform bacteria, toxoplasmosis, and salmonella. — American Pregnancy Association

After a strong cocktail and a quick glance in the mirror, I took my partner and my son to my favorite Phở restaurant. My go-to order is Xe Lửa, beef broth noodle soup, which contains beef brisket, navel, frank, tripe, tendon, and eye of round — basically a fête of raw and rare pieces of meat. I was no longer a pregnant woman, so as soon as the waiter asked for our order, I pointed to a large bowl of number one, licked my lips, and said "please" with the delight of an impatient child. I was going to indulge a giant, steaming, delicious bowl of coliform bacteria, with little to no regard for the impact of my eating decisions.

After making my way through shrimp summer rolls, fried crab cheese wontons, Vietnamese crispy spring rolls, and the largest bowl of phở on offer, I planned to head home, keep my black dress on — which, coincidentally, actually made me look a few weeks pregnant, thanks to my shameless decision to overeat — and enjoy a deli sandwich from my favorite bodega the moment my stomach settled enough to make room.

That's when I heard my partner laugh for the first time in over three days.

I had daydreamed about slices of turkey and ham, mushed together and combined with tomatoes, cheese, and lettuce throughout my short-lived pregnancy, a bi-product of being the type of insufferable human being who always wants what she can't have the moment she's told she can't have it. And that's when I heard my partner laugh for the first time in over three days. The thought of eating anything else after our over-zealous meal was, admittedly, hilarious, and my wish-list of non-safe pregnant foods gave him a reason to smile again.

The party ended with my favorite episodes of The Office, including the reveal of Pam Beesley's pregnancy, Pam and Jim's wedding, and Pam giving birth. And, thanks to the day's festivities, I didn't cry.

I didn't cry a week later, either, when the pain grew worse and I was sent to the emergency room. I didn't cry when I was given pain medication, or told I would need a D&C to evacuate my uterus of the retained products of conception. I didn't cry as I stared at the ceiling or attempted to ignore the vacuum aspiration, because I had my party.

I had planned an elaborate reveal for my coworkers; the kind of annoying announcement that, I had hopes, would end with gasps, hugs, and perhaps a few tears. But celebrating my miscarriage was, honestly, the next best thing.

Celebrating my miscarriage in an unapologetic, if unusual way, forced me to remember that I am more than the outcomes of reproduction. I am more than a positive pregnancy test, or the number of fetuses I can carry to term, or the number of children who call me "mom." I am not defined by my pregnancies, or how they end. The emptiness I felt the days, and even weeks, following another perceived reproductive failure isn't indicative of my character, my worth, my intelligence, my humor, or my adorably flawed personality. For now my womb is a hollow, but my resolve is not. There will be other pregnancies. And, if not, there will be whiskey cokes, incredible bowls of delicious, listeria-laden meats, little black dresses that cut off my circulation, and deli sandwiches by the dozen. There will always be more of something, because I am more than the sum parts of my reproductive anatomy.

So yes, I was looking forward to celebrating my pregnancy with friends and family members. In fact, I had planned an elaborate reveal for my coworkers; the kind of annoying announcement that, I had hoped, would end with gasps, hugs, and perhaps a few tears. But celebrating my miscarriage was, honestly, the next best thing, and in the end I believe it was a necessary part of my journey towards baby number two. Because when I hold that child in my arms, after 40 weeks (more or less) of abstaining from alcohol, strutting in wonderfully slutty dresses, avoiding my favorite bowl of phở, and saying no to deli sandwiches, I will remember the miscarriage I celebrated. I will remember that while I am so lucky to be that new baby's mother, I am more than a mother, too.