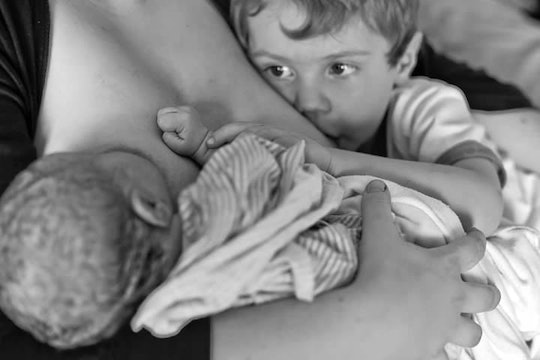 I Had Breastfeeding Agitation & This Was What It Was Like

Mostly when I talk about tandem breastfeeding, I have nothing but positive things to say about it. It eased my older child's transition into big brotherhood. I loved that both of my children were receiving the health benefits from my milk. Our breastfeeding sessions were calm and relaxed since I wasn't trying to mind a busy kid while having an infant at the breast. But the one big drawback for me was that I experienced breastfeeding agitation.

Breastfeeding agitation is a sudden overwhelming feeling of annoyance, rage, and/or anger at your child for breastfeeding, according to La Leche League International. According to Danielle Downs Spradlin, a Certified Lactation Counselor and the founder of Oasis Lactation Services in the Atlanta area, "We've talked to doctors and women and done retrospective studies and we consistently find in American culture that women's pain is often dismissed. And you know, breastfeeding — especially because it involves the reproductive system — it's difficult to ethically and logistically study [because] there are all of these barriers that we really can't correct for." One of those difficult-to-explore areas is breastfeeding agitation.

If [a mom is] having these symptoms [of breastfeeding agitation], we know they're sometimes related to postpartum depression. I would refer a patient over to a mental health professional who has experience treating postpartum depression issues. Then, I'd ask the mom if that's a treatment option she's comfortable with because it's up to her what type of care she wants. Then we'd speak to her OB, saying these symptoms are consistent with breastfeeding agitation and from there, the doctor can diagnose anything physical [happening in the mom's body that might be contributing to this]. And then, as lactation consultants, we talk about lifestyle choices: Are these symptoms happening in the morning? Midday? Are there family triggers? We recommend that, with babies who are full-term and healthy, they're fed on cue and not on a schedule, but sometimes for a mom [dealing with breastfeeding agitation or other symptoms], we need to come up with a rhythm that's respectful of her needs in an effort to best help her meet her goals.

According to La Leche League, different breastfeeding women experience breastfeeding agitation differently, and it can range in severity from woman to woman.

For me, it was this sudden feeling of wanting to remove my child from the breast right this instant. It was an almost creepy-crawly feeling. It was very physical, sort of like an itch I couldn't scratch, and all I wanted to do was scratch it so it'd go away. When I was tandem breastfeeding, my son mostly breastfed for comfort and therefore didn't actually require that much milk, so I would ask him (as calmly as I could muster) to let go. And if he didn't, my anger at him would skyrocket to irrational levels in a heartbeat. It took all of my strength to be stern but calm when I really wanted to pop him off and run away from him.

That feeling didn't stop me from breastfeeding him though, because the emotions I felt at the times of agitation were unlike what I felt the rest of the time. I was still emotionally attached to breastfeeding my son. I cherished our time together and loved that it gave him some time to regroup and unwind. But sometimes, as soon as he'd latch, I'd feel that surge of emotion so unrelated to what I intellectually felt about breastfeeding him.

When he didn't let go when I asked him to, I almost couldn't handle the annoyance and anger I felt.

My agitation didn't come totally out of the blue. It ramped up, starting about halfway through the pregnancy. When he'd first latch, my sensitive nipples would hurt, and once the pain subsided, I'd be OK and comfortable for a minute, but at some point during the breastfeeding session, I would just feel done, and I'd ask him to let go. He was about 2-and-half years old at the time and could understand my requests, but we still had to develop our own language for it. I'd grit my teeth and tell him he'd have to finish soon. Then I'd say "Three, two, one, blastoff!" It became a sort of game, and he'd let go very proudly on "blastoff" and smile up at me. And then any annoyance I felt toward him disappeared immediately.

That's how I coped during my second pregnancy. But it became harder once his sister was born. First of all, my milk was suddenly plentiful again, and my son, understandably, was more reluctant to let go when he was enjoying the flow of milk. And when he didn't let go when I asked him to, I almost couldn't handle the annoyance and anger I felt. Most women report that breastfeeding agitation sets in about halfway through a pregnancy, though it can strike any mother breastfeeding an older child. For some moms, the feeling is at its peak in pregnancy and can even abate toward the end of pregnancy. For me, the feelings continued throughout. They were especially intense when both of my children were breastfeeding at once. And there was a period of adjustment for my son. When I was breastfeeding his baby sister, even when he had let go, he saw that she got to keep breastfeeding. Seeing that, I imagine, was hard for him. We solved this by me reminding him that he had to save some milk for her, which seemed to satisfy the question of why she got to breastfeed more than he did.

Something about having both breasts busy was just mind-bogglingly annoying to me. I couldn't stand the feeling.

The feelings of anger and aggression and rage were especially noticeable when they would both breastfeeding at the same time. Something about having both breasts busy was just mind-bogglingly annoying to me. I couldn't stand the feeling. Again, intellectually, I enjoyed breastfeeding them both at the same time. It was so nice that we were all calm and cozy and together. It was often the only time I felt like I could really put my feet up. But only a minute or so into any given breastfeeding session, that feeling would strike again, and I'd want nothing more than for my son to stop breastfeeding. I obviously persevered. It wasn't enough to make me wean him or seek professional help. (Everything that I'd read said the only way to "cure" this was to wean the older child, so there wasn't anything else to alleviate the agitation.)

I realize it makes sense: My body was reacting to the fact that it had to put the baby first. In pregnancy, my body was encouraging my son to wean, first with my milk drying up and my sore breasts and then by my feelings of agitation. And then after my daughter was born, these feelings of agitation were ensuring that he didn't hog too much of the milk I was producing. And I can see that by teaching him to "save milk for his sister" and to "blastoff" when I told him, I was preserving a lot of my supply for my baby (who was clearly getting enough since she soon had an unbelievable amount of adorably perfect baby rolls).

Even knowing there was a good reason for the feelings, that didn't help me deal with them in the moment. The feelings of annoyance and disgust aren't rational or necessarily founded in my actual thoughts, but they're still very, very primal. I could see how a lioness might swipe at a lion cub, or how a dog might walk away from her pups when they try to feed. I understood, for the first time, that feeling. I love my children and am very affectionate with them, but those times when I felt those extreme emotions, it was almost difficult for me to remember that. I just wanted him off the breast. And once he was off, the feelings would subside as quickly as they had appeared.

I'm glad I had read about breastfeeding agitation when I started experiencing it. Because initially, I felt like a bad mom. How could I suddenly be so impatient with this child I love, and whom I still want to nurse? But it's apparently quite common among tandem breastfeeding mothers. It was definitely a hurdle in my breastfeeding relationship with him, but ultimately, we stuck with it for another year. For us, the benefits outweighed the discomfort I felt during breastfeeding. Eventually, I do think going through it helped us with weaning him. He understood my rules and boundaries and became really flexible in respecting those boundaries. I'm glad I stuck with it, but, man, in those moments, I really hated breastfeeding him.