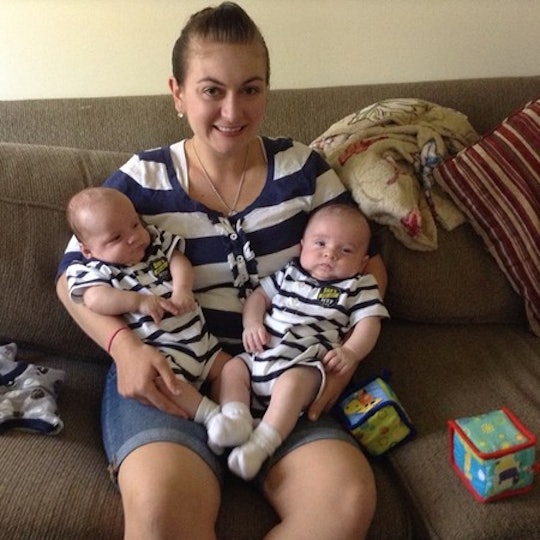 I Had Cholestasis Of Pregnancy & This Is What It Was Like

I thought being diagnosed with infertility would be the hardest part of trying to have a baby. I had a stint of denial, followed by a round of acupuncture that did nothing for me, a brief detour to discuss adoption, and then finally made the decision to try IVF. After struggling so hard to get pregnant, when I found out I was not only pregnant but expecting twins, it felt like vindication. I believed my luck had finally changed and looked forward to starting my very own happily ever after in about nine months. Even though my doctor put me on bed rest at 27 weeks, I remained positive. I knew bed rest wasn’t uncommon for twin pregnancies, and although being bed bound was nothing like a vacation, I felt confident that if I continued to play by my doctor’s rules, everything would be fine. Until I was diagnosed with cholestasis.

After the initial bed-rest order, I’d pass the time in bed leafing through my pregnancy books with my husband, snacking, and scratching myself because no matter how many lotions I used, my hands, feet, and stomach were always super itchy.

One night, as my husband was reading a chapter about scary things that could go wrong during pregnancy, he remarked on my habit of acting like a dog with fleas, noting the book said it could be due to something called “cholestasis of pregnancy,” and told me to tell my doctor. I shrugged off his concern, thinking there was no way I could be cursed with both bum ovaries and a rare pregnancy complication. After all, I had never even heard of cholestasis before. Besides, the book was vague on the details, saying only that cholestasis only affects one to two pregnancies in 1,000. So, sure, most nights my skin felt like it was on fire, but I wasn’t concerned.

I thought the excessive itching on my feet was because I was wearing synthetic compression socks all day to keep the blood flowing to my lower limbs. The itching on my stomach I attributed to growing pains from the babies trying to find room inside me, and I believed my itchy hands and wrists were from the bed sheets getting gross because I was lying on them all day. I told myself I’d try a sugar scrub to get rid of any dead skin, and forgot about it.

When I went to my weekly doctor’s appointment the next day and he asked if I had any concerns, I didn’t even think to mention the itching, but my concerned husband chimed in. I was annoyed -- until I caught my doctor’s concerned expression. The doctor asked me how long the itching had been going on and how intense it was. He told me he was sending me for a blood test immediately, and writing me a prescription to start right away. He suspected I had cholestasis of pregnancy, and if he was right, my already high-risk pregnancy was about to get even more complicated.

After the lab confirmed that I did indeed have cholestasis, my doctor gently explained what we were dealing with. Cholestasis occurs when your body has trouble processing the bile being produced by your liver. Women are usually diagnosed in their third trimester, as the bile backs up to a level that creates the intense itching I was already feeling. Being pregnant with multiples increases your risk for cholestasis. Some women also experience nausea, a lack of appetite, and jaundice, but for me it was the itching that got my husband’s attention.

The good news, my doctor assured me, was I would be absolutely fine. Once my sons were delivered, my liver would be able to process the backed-up bile and the itching would go away within a couple days. This was a relief to hear, and I was prepared to deal with the discomfort until my due date. After all, I was already stuck in bed with massive heartburn and a body that each day looked a little bit more like Violet Beauregarde after she ate the forbidden gum. What was a little itching on top of everything else?

Except that cholestasis of pregnancy can lead to stillbirth.

After everything I had gone through to have these babies -- the testing, months of injections, the strain on our marriage, my physical discomfort -- hearing I could now lose them after fighting so hard for so long was one of the darkest moments of my life.

I couldn’t help it: I sobbed, right there on the cold examining table wearing nothing but a paper robe. Once I had calmed down enough to talk, I had questions: just how high was the risk of stillbirth, and was there anything we could do to prevent it?

My doctor told me even as I lay there at 30-weeks pregnant, there was a risk of stillbirth, and the risk increased as my pregnancy went on. He felt the odds were in our favor if we waited until 35 weeks, and then induced my labor. Although the chances of a stillbirth before 35 weeks were small, he was very honest in saying there still was a risk. However, at 30 weeks, the boys’ lungs were still too immature for them to be born without the potential for serious complications.

I went home feeling like I had a time bomb strapped to my body, only the countdown wasn’t going to harm me, just the babies I’d never met but was already in love with.

Besides taking medication, there wasn’t much I could do, so I became fixated on making sure the babies were still alive. I downloaded kick-counting apps, made charts tracking each baby's movements, and gulped down orange juice if it had been too long since I felt one of the boys move. About a week after my diagnosis, I was absolutely convinced I hadn’t felt “baby B” move all day, so I panicked and called the doctor, who told me to go into the hospital immediately for a stress test.

Both babies were fine (they had changed positions on me), but I, clearly, was not. My nurses urged me to stay calm -- if not for myself, than for my babies’ well-being — but I couldn’t. I was furious with my body for being so dysfunctional. Not only was I unable to get pregnant on my own, I couldn’t even manage to have a normal pregnancy. I wondered if this was a higher power punishing me for using advanced reproductive methods to get pregnant. I had to stop watching reality TV shows because it seemed like everyone on them was having a baby, and I was bitter and jealous of the women who made it look so easy to have a child. I spent every waking moment clutching my belly, willing my boys to hold on just a little longer.

A lot of pregnant women will say going into premature labor is one of their greatest fears, but when my water broke at 33 weeks and two days pregnant, all I felt was relief.

Three hours of pushing and one c-section later, my boys were born. They were small, early, and needed a short stay in the NICU, but they were very much alive.

There isn’t a day that goes where I’m not thankful my husband spoke up that day in the doctor’s office. Pregnancy causes so many changes to your body it can be hard to tell which ones are normal and which one’s aren’t — especially if you’ve never been pregnant before. But having cholestasis made me realize that there’s no such thing as a silly question or concern when it comes to your health. My pregnancy came far too close to a tragic ending, all because I didn’t think it was important to stand up for myself or my unborn babies.

More Like This
I Found Gender Euphoria In My Second Pregnancy
Lauren Conrad Shares Experience With "Lifesaving Reproductive Care" After Ectopic Pregnancy
Barre Could Be The Low-Impact Prenatal Workout You Need
Why Babies Love Water, According To Experts