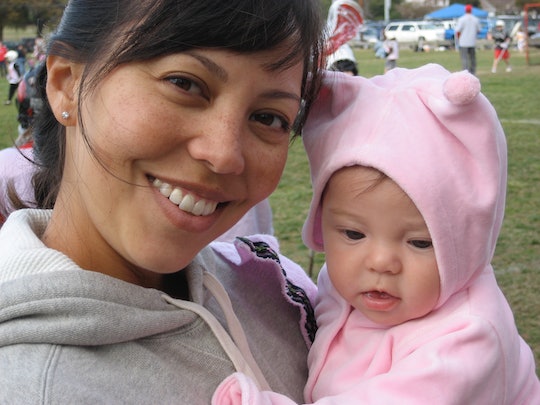 Shortly after giving birth to my first baby, I noticed an unusual feeling I'd never experienced before every time I went to breastfeed. Several times a day, I’d suddenly, inexplicably, feel slightly nauseated, overwhelmed by guilt, and plagued by a general sense of feeling "gross.” The strange part was that these surprisingly strong emotions lasted only 30 seconds to a minute and then vanished as suddenly as they'd appeared. At first, I tried to analyze the thoughts I had right before the bad feelings re-appeared, but most times I wasn't thinking about anything negative. On the contrary, actually — I was usually thinking about how adorable my baby was. The strange and sudden dark feelings didn’t seem to be connected to my stream of consciousness. Instead, they seemed to only happen when I was breastfeeding, which was confusing for me because through all my appointments with doctors, midwives, and lactation specialists, no one had ever mentioned feeling like this. Turns out, I had D-MER and never realized it.

The realization that breastfeeding was making me feel this way was triggered by something my mom had once told me. She’d had a long and successful breastfeeding relationship with all four of her children, but she did mention that right before her letdown she’d often feel suddenly sad for a few moments and then the feeling would disappear. Thirty years ago, my mom told her doctors about this feeling, but the only response they had was to question her about postpartum depression symptoms, which she wasn’t experiencing.

My mom described the feeling as “sadness,” but to me it felt more like “disgust.” It was a mix of sadness, self-loathing, shame, anger, and revulsion all rolled into one. And though the feelings were difficult for me to navigate, the fact that my mom had gone through a similar experience — even if she didn’t know what it was or why — was extremely comforting. It made me think that perhaps it was just a normal part of breastfeeding. So I started to talk about it with other women. The only problem was, when I did, no one recognized the feeling I was describing. On one hand, it was comforting that my own mother had experienced similar symptoms, but on the other, it was confusing that out of all the breastfeeding women I knew not a single one had any idea what I was talking about. That’s when I took to Google. After 15 minutes of searching, I found the D-MER (Dysphoric Milk Ejection Reflex) website. It felt like I finally had an explanation for these mysterious feelings.

Reading the quotes from other mothers confirmed this diagnosis for me, as quote after quote described, in such similar detail, my own experience and feelings.

Dysphoric Milk Ejection Reflex is a newly recognized condition affecting lactating women that is characterized by an abrupt dysphoria, or negative emotions that occur just before milk release and continuing not more than a few minutes. Preliminary testing tells us that D-MER is treatable and preliminary research tells us that inappropriate dopamine activity at the time of the milk ejection reflex is the cause of D-MER.

It was exactly what I'd been going through, and it seemed I wasn't the only one. Reading the quotes from other mothers confirmed this diagnosis for me, as quote after quote described, in such similar detail, my own experience and feelings. Afterward, I mentioned what I’d read online to my doctor, my midwife, and my lactation consultant, but in 2007, when I gave birth for the first time, it seemed no one had really heard of the condition. Going through something on the inside that no one in the medical community seemed to think was a big deal was incredibly isolating.

Looking back, it would’ve been nice if D-MER was mentioned in the breastfeeding section of my pregnancy and childbirth classes or by any of my medical professionals. Thankfully, I had an online community of moms at-the-ready to rally around me.

The knowledge that this was happening to other moms out there made a huge difference in my outlook. Before I learned about D-MER, the bad feelings weighed heavily on me. Even though the feelings themselves would pass quickly, I'd spend the time in between episodes trying to figure out exactly what about my life was causing such negative emotions. It wasn’t my baby or husband — these feeling stemmed from the way I felt about myself. Since I was pretty happy with my life, trying to puzzle out where this negativity came from was a confusing, frustrating and fruitless emotional exercise.

After learning about D-MER, I understood what was happening and I could treat it as a separate incident; something "fake" that didn't really pertain to my true state of mind. Though the emotions I felt were real, once I understood the cause I no longer spent time or energy trying to figure out why I was feeling them. Fortunately, just this knowledge was enough to help me positively deal with D-MER. Because I expected the negative feelings to come with every letdown, I focused on the fact that those unpleasant 30 seconds would vanish just as quickly as they’d come. I never felt the need to seek more treatment, although the D-MER website explains there are other options that help, including changes in diet and prescribed medications, because I felt supported by the testimonials I'd read again and again online.

My symptoms of D-MER followed me through each of my three pregnancies, each time looking and feeling very much the same. I experienced the strong dysphoria with every letdown, but by the time my babies had all reached their first birthdays, I only felt mild symptoms a couple times per day. By 2012, when I gave birth to my third baby, both my midwives (but sadly, not my doctor) were familiar with D-MER. Looking back, it would’ve been nice if D-MER was mentioned in the breastfeeding section of my pregnancy and childbirth classes or by any of my medical professionals. Thankfully, I had an online community of moms at-the-ready to rally around me.

Getting through the infant stage is hard on mothers for so many reasons — lack of sleep, loss of autonomy, and limited time and energy for self-care, to name a few. Having D-MER added yet another layer of difficulty to dealing with the already-emotional roller-coaster of parenting. When it came time to wean my babies, I felt a bit sad about that bond ending, but to be honest, I was mostly relieved that the dysphoria was ending along with it.

More Like This
Ashley Graham On The “Fun, Organized Chaos” Of Raising Twins
Spain Could Offer Up To 5 Days Of Menstrual Leave A Month & It'd Be A Game Changer
Adult Gymnastics Brought Me Back To Myself
Ashley Graham Shared A Sweet & Honest Look At How She Tandem Breastfeeds Her Twins