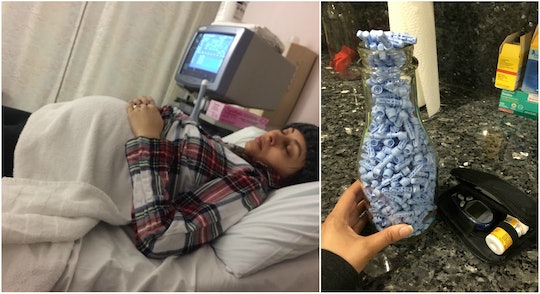 I Had Gestational Diabetes, But All Anyone Cared About Was My Diet

Like most women, I intended to eat healthy during pregnancy but looked forward to indulging the occasional craving or two — I had fried pickles and ice cream on my pregnant-lady bingo card. As luck would have it, however, just as my nausea subsided, I was diagnosed with gestational diabetes (GD). I was really looking forward to eating my favorite foods again now that I could actually keep food down, but was instead put on a strict low-carb, high-protein diet by a nutritionalist, and asked by my doctor to test my blood sugar levels four times a day. Changing your diet is the first course of action when treating GD and if this didn't work, medication was the next line of attack, which I was hoping to avoid. Luckily, the diet worked and I was able to control my GD, but I was judged harshly for sticking to a diet throughout the pregnancy.

When I was diagnosed, I was devastated and blindsided. I was in denial at first because I ate healthy and exercised regularly.

The condition is relatively common, with around 2 to 5 percent of pregnant women developing gestational diabetes, according to the American Pregnancy Association, and a higher incidence (7 to 9 percent) among women with certain risk factors. In short, GD is a temporary (in most cases) form of diabetes that occurs during pregnancy, when a woman’s body is unable to produce enough insulin in order to regulate sugar. Obesity and a family history of diabetes can heighten your risk, but it can also appear out of the blue. GD is manageable, but, untreated, puts you at risk of a large birth weight, premature delivery, temporary breathing problems for your baby, and jaundice, among other issues — scary stuff. I had never really heard of GD, so when I was diagnosed, I was devastated and blindsided. I was in denial at first because I ate healthy and exercised regularly. But having a family history of diabetes is what ultimately did me in.

I didn't have an easy pregnancy up until that point, and being diagnosed with GD made things even harder. But I was determined to do whatever it took to have a healthy baby. So I adjusted to my new diet and meal schedule that was put in place for me. It wasn't easy. I had to significantly reduce my intake of carbs, which meant cutting out bread, sugar, and even most fruits. Simply drinking juice or eating an apple could spike my sugar. I had to prick my finger four times a day in order to test my sugar levels with a glucose monitor. I also had to write down everything I ate along with my sugar readings, and send them to a nurse every week.

Because I had GD, I had to undergo more testing, monitoring, and attended more doctor visits than the average pregnant woman. I went to the doctor anywhere from two to three times a week so my doctor could monitor how well the diet was working and if everything was going smoothly with my pregnancy.

As if the adjustment to all of the additional testing, doctor appointments, and my new diet wasn't enough, I found it extremely hard to stick to my diet at social gatherings or when I was around people. I felt like I was constantly being judged or questioned for the way I was eating. It was strange for a lot of people to see a pregnant woman refuse indulgent foods like cake or chocolate. There's a misconception that pregnant women can eat to their heart's content — that we should stuff our faces.

My mother-in-law was constantly asking why I wasn't eating more. She would offer me bread, desserts, and soda because, as she put it. I 'needed to fatten up.'

But according to WebMD, "the reality is you need only 100 extra calories a day during your first trimester, and 300 extra calories a day in the next two. That means adding the equivalent of an extra glass of milk in the first trimester; a glass of milk, an apple, and a couple of graham crackers in the second and third." And as a woman with GD, I had to be even more careful not to eat too much or too many foods high in carbs or sugar.

Whenever I went out to restaurants, the waiters frequently seemed shocked that I refused a bread basket or that I was eating small portions. On one particular occasion my husband and I went out for a Valentine's Day dinner and I overheard a waitress whisper to another waiter that I wasn't eating much. And when I had to opt out of dessert, I got a lot of dirty looks. Other patrons overheard me say, "I have to check how many carbs are in that before I eat it," as I Googled away on my phone and they looked baffled. It didn't help that I was already thin, and so people assumed I was just trying to avoid gaining weight for superficial reasons. And it wasn't just strangers that were concerned.

People would make judgmental comments like, 'Well I ate healthy, that's why I didn't get it,' as though I had somehow brought this on myself.

Even though I explained that I had GD, my mother-in-law was constantly asking why I wasn't eating more. She would offer me bread, desserts, and soda because, as she put it. I "needed to fatten up." She would compare her pregnancy to mine and remind me of all the things she was encouraged to eat — all of which I was told to avoid. This caused some tension between the two of us. She was worried that I wasn't eating enough or not gaining enough weight. But according to my doctor, I was gaining enough weight and everything was fine.

Being on a diet during pregnancy is unheard of for most people. It can seem extreme or bizarre. Worst of all, sometimes when I would explain that I needed to eat a certain way because I had GD, people assumed having diabetes was somehow my fault. People would make judgmental comments like, "Well I ate healthy, that's why I didn't get it," as though I had somehow brought this on myself. GD isn't always caused by unhealthy eating habits or because a woman has done something. I became really defensive, especially in the last few weeks of my pregnancy.

Even though I was constantly defending the way I was eating, I continued my diet and eventually had a healthy baby. In hindsight, it just seems amazing to me that instead of applauding and supporting a woman who is doing her very best to ensure a healthy baby, my pregnancy was trailed by endless criticism and judgment. Adjusting my diet was necessary for the health of my baby, and I would do it again in a heartbeat.

Having GD opened my eyes to a lot. I saw through our ideas about how a pregnant woman should behave and look, and the hypocrisy of blaming a woman for a hereditary condition even as her attempts to control that condition were met with ridicule. It was a true baptism of fire into the world of motherhood. Today, as someone who had GD, I'm at higher risk of developing type 2 diabetes in the next 5 to 10 years, and so I'll be using things I learned during pregnancy to handle nutrition — and the judgment that comes with — in the years to come.