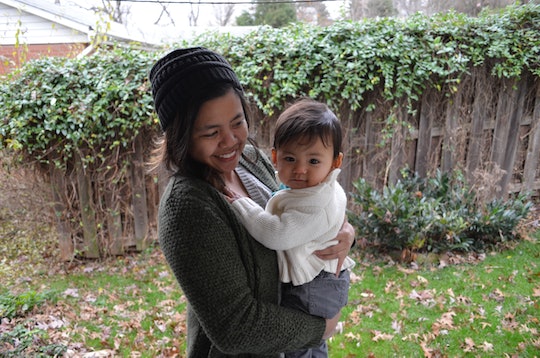 My Gestational Diabetes Was Actually A Blessing

I’ve always had a hyperactive sweet tooth. I eat Hershey’s Kisses like popcorn. Chocolate pretzels are my go-to treats. And if there’s a buffet, you can bet your ass that I’ll be at the dessert table, sampling all the pastries available and piling it onto my plate “for later.”

So you can just imagine the heartbreak I felt when I failed my glucose test and I was diagnosed with gestational diabetes (GD) during my first pregnancy. For those who don't know, GD is a type of diabetes some women develop during pregnancy. The American Diabetes Association defines GD as an increase in your body’s level of blood glucose, the main sugar found in the blood, which is the body’s main source of energy. GD can lead to an increased risk of developing preeclampsia, as well as an increased risk of having a larger baby.

I am a petite Filipina woman. (Before I got pregnant, I was about 5'3'' and 120 pounds.) Because I was reasonably fit before I got pregnant, I didn't think I was at risk for developing any health issues during pregnancy. So when the doctor brought us into her office to explain the findings of my glucose test (which I took at 26 weeks), I quickly went through the first stages of grief, Kübler-Ross style.

There was no way I had GD, I remember thinking. Despite my incessant snacking, I was healthy and not obese and pretty active before I got pregnant. No, my doctor said. Even if I wasn’t overweight or obese, an active lifestyle wasn’t enough to spare me from the diagnosis. Apparently, the fact that I was non-white made me more predisposed to it. In fact, according to one study, Pacific Islanders, South Asians, and Filipinos have higher rates of diabetes than all other ethnic groups, and I was two out of three.

There I was, halfway through my pregnancy, feeling like a princess whenever someone said I had the pregnancy glow, and all the while I had been a candidate for gestational diabetes.

Frankly, I felt like an idiot. There I was, halfway through my pregnancy, proud of myself for not having doubled in size overnight, feeling like a princess whenever someone said I had the pregnancy glow, and all the while I had been a candidate for gestational diabetes? Unfortunately, yes. According to the CDC, the prevalence of gestational diabetes is as high as 9.2% of all pregnancies.

I tearfully told the doctor that I had a birth plan. I wanted to experience natural childbirth, and what a baby going through my vagina actually felt like. I was just getting into my Lamaze classes, and I was even contemplating going drug-free and hiring a doula to coach me through the pain. "Does having GD mean I absolutely have to get a c-section?," I asked her.

The doctor said no, not necessarily, but given my small size and the possibility that I would have a larger-than-average baby, opting for a vaginal delivery presented an increased risk of shoulder dystocia, or the baby's shoulders getting stuck and incurring damage in the birthing process. Of course, we didn't have to decide right then and there. We could wait until my last checkup before my due date to confirm the size of my baby and decide if we wanted to modify our birth plan.

At that point in our appointment, I pretty much lost my composure, and my face became a snotty mess. The doctor sympathetically pushed the box of Kleenex on her desk toward me, and I grabbed what I could to stop the waterworks. "Nothing you did could have prevented this from happening," the doctor gently told me. "It's one of those things that just...happens."

After I was officially diagnosed with GD, however, things changed immediately. I was categorized as a "high-risk" pregnancy and told to restrict my diet. I was also instructed to record everything I ate, as well as check my blood glucose levels before and after every meal. I needed to do these things to ensure that my baby wasn't born with any complications from gestational diabetes, such as breathing problems, obesity, and later on, high risk for type 2 diabetes as an adult.

Every time I went over the prescribed blood sugar level, I felt like I was letting my baby down, like every extra morsel of food that caused my blood sugar to spike was putting him at risk. I already felt like a bad mom, and I wasn't even officially a mom yet.

At first, I hated the process of maintaining my glucose levels. Since I was already halfway through my pregnancy and my hugeness was undeniable, my exercise regimen was pretty limited (if not completely non-existent), so the only real way I could keep my blood sugar in check was by limiting my carbohydrate and sugar intake. The “eating for two” excuse was thrown out the window and was replaced by a super strict diet. I could either have a single (unsatisfying) granola bar or a small glass of orange juice or milk for breakfast, not my usual bowl of chocolate Lucky Charms or chocolate chip pancakes with syrup and cookie butter. I had to stop using butter when cooking, and I couldn't have too much rice, bread, or pasta. I couldn’t even binge on fruits because they had natural sugars. It basically felt like I was being punished.

Recording everything I ate and submitting weekly reports to the nutritionist felt incredibly tedious. On top of that, I had to prick my finger six times a day, before and after meals, to measure my glucose levels and make sure they were within an acceptable range. Although the nutritionist told me to avoid being too hard on myself and to allow myself to go over the limit once in a while (“Treat Christmas Day like a cheat day!”), every time I went over the prescribed blood sugar level, I felt like I was letting myself and my baby down, like every extra morsel of food that caused my blood sugar to spike was putting my child at risk. I already felt like a bad mom, and I wasn't even officially a mom yet.

Bottom line: what I had previously dubbed a curse was actually a blessing in disguise.

As soon as I accepted the reality of my diagnosis and allowed myself to adjust to it, however, things became a lot easier. My husband supported me by eating what I ate for breakfast, lunch, and dinner, which mostly consisted of non-starchy vegetables and lean protein. I snacked three times a day, mostly on healthy foods like nuts, small servings of fruit, and yogurt. We both quit drinking soda, and I found myself drinking water more (which I normally forget to do). I rarely ate too much and only gained the minimum amount of pregnancy weight.

Bottom line: although I hated having to be hyper-vigilant about what I ate, being diagnosed with gestational diabetes forced me to eat a hell of a lot healthier than I normally would have. What I had previously dubbed a curse was actually a blessing in disguise.

Having GD taught me that the nutritional facts on the boxes of most food actually mean something significant, and that these numbers can truly affect how my (pregnant) body works. It forced me to come up with creative and healthy ways to prepare my meals and find joy in food. It opened my eyes to diabetes as a disease and how hard it must be for other people who have it, and it made me feel grateful that I only had to go through it for a short time. Most importantly, it not only ensured that I was giving birth to a healthy baby, it also made sure that I would be in good shape after my child had left my womb.

My son is now 10 months old, and he's a constant reminder that going through GD was 100% worth it. My husband and I are planning to try for another kid later this year, even though the fact that GD occurred in my first pregnancy makes the chances of it occurring again in subsequent pregnancies 90% more likely. I’m no longer worried about it, though. I know what to do. This time around, going through GD will be a piece of cake, pun intended.­