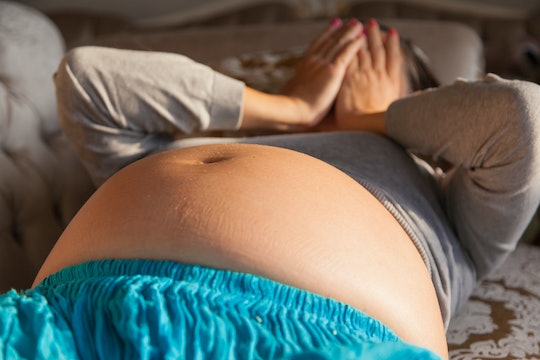 I Had Lightning Crotch & Here's What It Actually Feels Like

It's no secret that pregnancy can be super uncomfortable, especially during the third trimester. My first pregnancy was full of debilitating aches and pains, from sinus pain behind my eyes, to my oh-so-swollen feet, and everything in between. Then, late in my third trimester, I experienced an entirely new, unusual, and markedly unpleasant pain, and it completely freaked me out. You guys, I had lightning crotch and here's what it actually feels like, because why aren't we talking about this uniquely uncomfortable pain more frequently? Honestly?! The last thing you need, when you're feeling shots of lightening in your pants, is surprise.

Like many parts of pregnancy, lightning crotch is sort of hard to describe, unless you've experienced it yourself. It felt like a sharp pain in my vagina — literally like electricity was shooting out of my cervix — or maybe like my baby was stabbing me with something sharp, or had, perhaps, somehow acquired a taser. I wasn't sure. I was used to the so-called "typical" pregnancy pains, like my unborn baby kicking and punching me from the inside, and sometimes so strongly that she took my breath away. And, of course, during the end of my pregnancy my daughter's head feeling like a bowling ball between my legs when I walked — or more accurately — waddled. But, this lightning crotch pain was unlike anything I had felt before. Honestly, it was more than a little bit unnerving, and OMG I cannot understate how much it hurt.

I worried that I was in early labor or that something was wrong with my pregnancy or my baby. I mean, was I pregnant with Wonder Woman, Storm, or Thor? Or was I going to give birth on the bathroom floor? To find some answers, I called my midwife in a panic. She stifled a laugh, and told me that I was experiencing a common symptom of late pregnancy — vaginal pain — which is sometimes aptly called "lightning crotch." She told me it was most likely a normal pregnancy pain and not a big deal. However, in my honest opinion, it was anything but normal to feel a lightning-like pain in my vagina. I had no idea this came with the pregnant territory.

I worried that I was in early labor or that something was wrong with my pregnancy or my baby.

When I cautiously Googled "lightning crotch," I learned that according to What to Expect, the nerves in your uterus happen to be located near your cervix. Since your nerves communicate their displeasure with electrical pulses, that explains why it feels like there's a lightning storm in your vagina when they are irritated.

When my vaginal pain continued, I brought it up at my next office visit. My midwife told me that lightning crotch can be caused by many different things, including your baby growing, your baby stretching, or when your baby "drops" or descend into your pelvis and, as a result, puts pressure on your cervix. My midwife also mentioned that it can be a symptom of varicose veins on your vagina or labia, which until that moment I had no idea were even a thing. Isn't pregnancy amazing? And by amazing, of course, I mean a bevy of uncomfortable situations that are as mind-blowing as they are inconvenient.

My last three weeks of pregnancy were really uncomfortable, and marked by frequent electric shocks and pain in my vagina.

My midwife told me that she thought my lightning crotch was likely caused by my cervix dilating in preparation for labor, since I was already two centimeters dilated when she checked my cervix. As What to Expect explains, what feels like vaginal pain during pregnancy might actually be your cervix changing — thinning out and dilating (getting bigger) to prepare your body for your baby's birth.

And since I was already dilated and feeling vaginal pain, I started getting my hopes up that the proverbial "show" was going to get on the road. Unfortunately, however, I learned the hard way that just because your cervix is dilated doesn't mean you're in labor, or that you will deliver your baby any time soon. My cervix was dilated for weeks before I delivered, and to my dismay my lightning crotch continued. I finally asked my midwife to stop checking, because when my baby's due date came and went, I lost hope of ever going into labor on my own. My last three weeks of pregnancy were really uncomfortable, and marked by frequent electric shocks and pain in my vagina.

The good news is that the aches and pains of pregnancy — including lightning crotch — are temporary. I was able to get some relief by using a pregnancy support band, taking it easy, and then — five days after her due date — delivering my baby. As glad as I was to meet her, I was a little disappointed when she was born with no magical powers that would have explained those lightning sensations. But in the end, I was seriously relieved to that my third trimester was over, my lightning crotch was behind me, and my precious baby was in my arms.