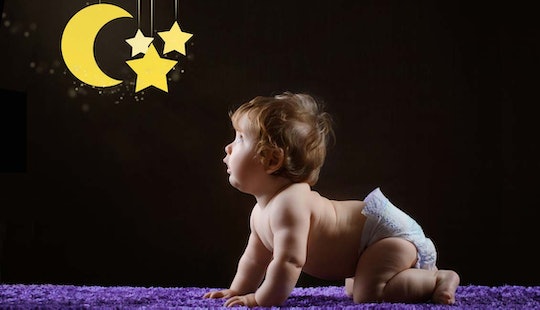 Crystals and geodes glisten on the coffee table. My 1-year-old Clara toddles over, picks one up, and tries to eat it like an apple. I know from Goop that crystals are an energy portal, potent source of power and a "timeless database of knowledge." Should she be chewing on an energy portal while cutting eye teeth, I wonder? We are in the home of astrologer Lee Mitchell to have my daughter's astrological chart read, because as parents we must always know more — about weird rashes, the chemical additives in applesauce, and the predestined cosmic inheritance of our babies. You know.

Sometimes I forget that my daughter will grow up. Parenthood has a way of squeezing you down to bottles, diapers, budgets, nap-time — lather, rinse, repeat. But it wasn't always like that. When I was pregnant, everything felt large and astounding, and wondering about the future magical. Who would our baby be? If we called her Songbird, would she have to sing folk music or just listen to it? Would she like Baked Lays or Ruffles? Have my eyes or yours? Maybe, my partner said, we'd buy her a telescope. Or a piano. Or a horse.

Today, a quick glance at the budget reveals we won't be able to afford any of those things for approximately five thousand years. But what is her journey? How can we help her on this ride? I felt as though I'd exhausted the wisdom of online parenting boards, and was looking for something more. That's how I found myself scanning the papyrus font of Mitchell's past-life regression therapy website.

The morning I went to see her, the clouds hung so low over ranch-land they could be mistaken for mist, and my daughter Clara squeaked when our ears popped on I-25. I drove the hour from Colorado Springs to Denver because these days, astrologers who will see you in person are few and far between. When I started calling around, several women with smoker's coughs harangued me for waking them up. "There are websites for that. I only do angels." Or crystals. Or tarot. "Why don't you just use the internet?"

The astrologer lived around the corner from a block-long megachurch. Her house was comfortable and suburban, if littered with crystals. Her living room smelled like roast chicken — which, she explained, she slow-cooked for her 100-pound boxer Toby, the chocolate brown sweetheart gated at the top of the stairs. She said Toby liked kids, but would "pulverize" Clara if she let him down. Even for a dog, Toby possessed soulful eyes. I mean, he seemed very attuned.

Lee, spiritual guide to this dimension and the next, met Clara; Clara giggled. To begin, I obediently entered my daughter's date, place, and time of birth into a website, and wound up staring at a wheel whirling with hieroglyphs. It was like something out of Indiana Jones — we had cracked the code to something ancient and grave, and I had no freaking clue what to do with it.

The astrologer explained all this while my daughter chewed on a book I'd brought for her to read, completely unaware that she was currently the center of the universe.

Lee explained that Clara's star chart was a representation of the sky on the night she was born. My stomach flipped, and I wondered if I'd made a mistake in coming. After all, expectations are the enemy of parenting. What if the fortune she told clouded my eyes to my daughter's true personality forever?

"Most people only know their sun sign, but you actually have three important signs in your chart," Lee drawled in a Southern accent as pleasant as a crockpot dinner. "The sun sign, the moon sign, and the ascendant. Think of it like a skeleton."

The sun sign is what you read about in a newspaper horoscope — Scorpio, Virgo, Taurus, and so on. The moon sign is more subtle, corresponding to an emotional core. The ascendant governs how you present yourself to others. In astrology, these three signs interact in complex ways, but you can get the gist of it from Refinery 29. Add to these three signs planets, aspects, quadruplicities, and triplicities, and you're looking at a novelistic web of meanings, possibilities, and traits.

Clara got lucky with Jupiter. This is quite possibly the best piece of astrological news a parent could ever hear.

The astrologer explained all this while my daughter chewed on a book I'd brought for her to read, completely unaware that she was currently the center of the universe. I noticed the floor was very clean; I asked if the baby could crawl around on it.

Clara got lucky with Jupiter. According to Lee, it's in the right house to give her a boost of good fortune when it comes to her health. This is quite possibly the best piece of astrological news a parent could ever hear.

Here’s the thing about astrology: mothers aren’t the only responsible party in the universe.

"I see this as a past-life regressionist," said Mitchell. "The chart can tell you why her soul decided to come here now."

I blinked, realizing I'd fuzzed out for a minute. (This is a mom thing.) I'd just been wondering if I needed to buy organic milk for Clara. Could I afford it? Would the regular stuff hurt her? But Mitchell was talking about her soul — its needs, decisions, and desires. In the presence of some serious perspective, I felt my near-constant mom headache ease.

Because here’s the thing about astrology: mothers aren’t the only responsible party in the universe. Planets, asteroids, magic, and mysteries exert greater influence than my choice of consumer goods. Honestly, it was kind of a relief to hear that.

Since pregnancy, I'd fallen into the rut of a worldview prescribed by newspaper articles and parenting books, in which I was personally accountable for everything that could possibly go wrong in my child's life. Our culture encourages this constant panic in mothers, which burns in the body like a low-grade fever.

As an example, shortly after Clara was born I became obsessed with attachment. I read about the three infant attachment styles — all you need to know is the bad ones lead to serious problems. They aren't so different from zodiacs in their vaunted power to predict, but unlike a moon sign, a bad attachment style would be my fault. As would behavioral problems, picky eating, and her as-yet-unwritten rejection letter from Yale.

The astrologer said Clara had chosen that night, and those stars, to be born. I looked at the baby, and predicted that she'd spit up a little sometime in the next ten minutes.

Mitchell pointed out the asteroid Chiron, tearing through Clara's 12th house. She said it represented a kind of soul wound, many lives deep. Chiron appears in everyone's chart, but where it appears in the whirl of your houses is immensely meaningful. Mitchell said Clara was here to help others, and that she'd be skeptical of any religion handed down to her; also, that she'd make a wonderful minister. She'd be sociable, but a bit of a homebody. Her past life had been a stifling one, and she'd chosen that night, and those stars, to be born under auspices more open to expressions of creativity and individuality.

I looked at the baby, and predicted that she'd spit up a little sometime in the next ten minutes.

Mitchell has been married several times, written several books, and is the sort of person you suspect has lived many lives in one. She makes it easy to drink a starry potion, to believe that souls themselves select the constellations under which they're born. Suddenly my worries about non-organic milk seemed wildly outsized. Through an astrological lens, worrying how many minutes to read to her each day to maximize her pre-K vocabulary seemed stupid. Clara was here, Mitchell said, for reasons that had nothing to do with me (beyond the obvious, I mean). As long as I was a good-enough mother, she'd grow up to attend to the stuff that really mattered.

By the time we had to leave, Clara had reached maximum squirminess and become impossible to control. Mitchell, who has grandchildren with her partner but no kids of her own, gazed at us like we were the true mysteries of the universe.

"Well," she mused, as I rushed about collecting our many worldly things — bottles, books for chewing, wipes, wallet, diaper bag. "I guess that's why you have them when you're young."