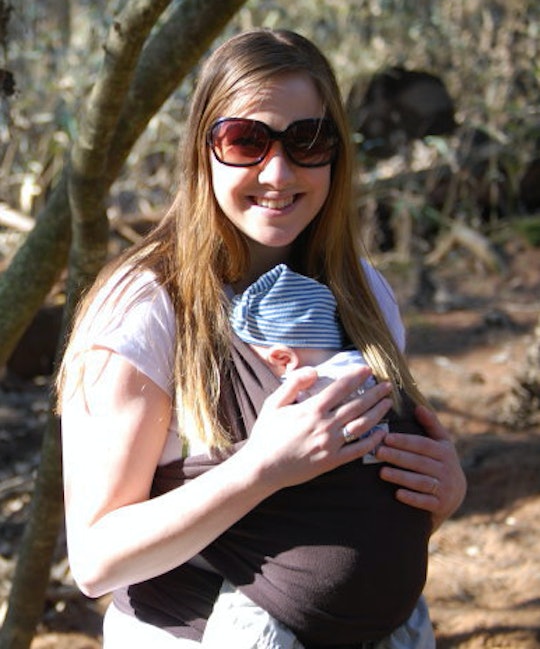 Baby Blaise Broadbent was born after three days of labor, three hours of pushing, and a whole lot of worry. They dropped him on my stomach before I was ready: one minute, I was pushing, and the next minute, there was a baby. “He looks like my dad,” I managed. Then I breastfed him, and that went well. That night, though, he cried. And cried. And cried some more. We tried everything: skin-to-skin, breastfeeding skin-to-skin, breastfeeding while swaddled, rocking swaddled, rocking un-swaddled, and bouncing. I had no idea a baby could cry like this. The attachment parenting model that I intended to follow told me babies cried for a reason and we couldn’t figure out the reason. So we asked the nurses for help, but they couldn't pinpoint a reason either.

I panicked, near tears. I almost made my husband go out and buy some gas drops (the nurses suggested we could try those but didn't promise they'd work) when Blaise finally latched and quieted. I thanked God. At that moment, I realized I had no idea what I was doing. Like, for instance, with diapers. Before I gave birth to Blaise I'd never put a diaper on a baby in my life. I kept putting them on backwards and feeling like a complete screwup. It didn’t help that nurses laughed at me. I didn’t know what all the nursery paraphernalia was at all, all the creams and nose bulbs and stuff. And I couldn’t swaddle to save my life. Blaise's birth was one of the most thrilling moments of my life. It was also one of the most terrifying.

I had to figure out how to do laundry while wearing a wrap. I thought I’d break Blaise’s neck when I leaned down to load the washer, so I squatted and held the back of his neck. I used one hand to move the clothes. I ironed things, but feared I’d burn him, so I put three pairs of socks on him and made sure his hands were tucked tightly into the wrap.

The diaper problem was solved when we went home to our cloth diapers. Blaise put the screaming on hold for a few days, and my husband began to feel like he could venture out. On Christmas Day, he went to CVS to get me bacon, but I begged him not to go. “I’ll only be gone a few minutes!” he said. How could I say, but you’re leaving me all alone with the baby? I was a mother. I was supposed to be able to cope solo. So I let him go. I stared at Blaise. Luckily, he slept the whole time. Otherwise, I wouldn’t have known what to do with him. Food? Diaper? What if I dropped him? What if he rolled off the bed? What if, almost the worst of all, he started crying?

I felt confident about two things: breastfeeding, and putting him in the wrap we'd bought where he almost inevitably fell asleep, or kept to such a state of quiet alertness that he might as well have. But other than that, I had no clue what to do with him and when. My default? When he cried, I breastfed him. It seemed to work.

I couldn’t even get his sleep right. Supposedly, Blaise was supposed to go to sleep, lay there for three hours, wake up, feed, and repeat. When he stirred, I'd take him from the co-sleeper and breastfeed him in bed, propped up on a pillow, then put him back. But it never worked that way. I had to wake up my husband to keep me from falling asleep while breastfeeding, and sometimes both of us fell asleep, and then the baby fell asleep, and we accidentally co-slept. This, I was told by everything I'd read and everyone I talked to, was dangerous and wrong. Co-sleeping this way might hurt him. So we bowed to the pressure and made the bed safe for co-sleeping. That way, when he woke up, he could fall asleep next to me safely. We also got a swing for him, which seemed to keep him asleep for longer than an hour. I was terrified. Not only were we co-sleeping (a giant "NO"), but we were also putting him to sleep in a swing, which the instructions (or lack thereof) explicitly told us not to do.

I had this baby. But I had no clue what to do with him.

When my husband went back to work and school, I found myself completely at sea. I had this baby. But I had no clue what to do with him, other than put him in wrap, breastfeed him when he cried, and change his diaper whenever it felt full. Should I be reading to him? If I wasn’t reading to him, would it stunt his intellectual growth? Should I be talking to him? Should we go outside? Stay inside? I decided to lay down in bed and put Blaise on the mattress next to me. Then I could breastfeed and get him to sleep and lay him on my chest, where he could stay the whole time. This seemed like a sound plan, and it worked. I planned to keep it up for the rest of the semester, day after day after day.

But chores had to be done. I had to figure out how to do laundry while wearing a wrap. I thought I’d break Blaise’s neck when I leaned down to load the washer, so I squatted and held the back of his neck. I used one hand to move the clothes. I ironed things, but feared I’d burn him, so I put three pairs of socks on him and made sure his hands were tucked tightly into the wrap. Dishes were impossible; I couldn’t lean down that many times without sending my son to the chiropractor. The only uncomplicated thing I found I was able to do was feeding the dogs.

Eventually, I calmed down. I learned I wasn’t going to drop the baby, co-sleeping wouldn’t kill the baby, and I wasn’t going to torch him with the iron. I figured out what cry meant Blaise had a dirty diaper, and what cry meant he wanted to breastfeed. I traded those snap-down shirts I thought I needed for the up-down method of boob baring, which meant I felt a lot less naked. I ditched the nursing cover. And though I never learned how to put on a disposable diaper, it was OK because we only used cloth. I realized people have been parenting since the dawn of time. I also realized it's OK not to have a clue what you're doing at first. I cut myself some slack. I knew whatever I did, I couldn’t screw up that badly. And so far, I haven’t.