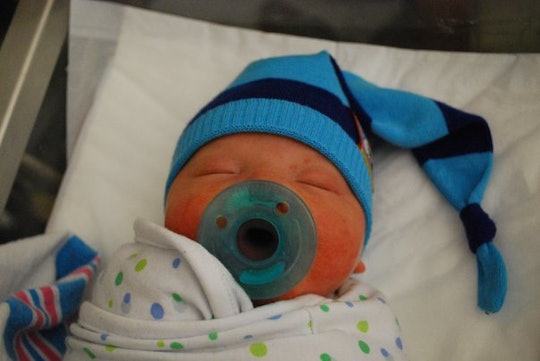 I Had Postpartum Anxiety, And It Absolutely Paralyzed Me

It’s hard to parent when you think your baby’s head might fall off. This might sound like a joke, but in the grips of my postpartum anxiety (PPA), it was deadly serious.

I knew about the fragility of necks, had seen my father twist the heads off doves when he was hunting. When I saw my third son, delicate in the ways all babies are delicate, all floppy head and fontanel, I thought of the doves, and I was consumed by worry that his head would similarly fall off.

I had two other sons to keep an eye on, so I couldn’t sit still and watch my son’s head all the time. I could, however, wrap him on my chest. I wore him constantly, holding him close so I could touch his head and keep him safe. I didn't tell anyone about my thoughts. They would think I was crazy.

This is postpartum anxiety. You find yourself doing and saying things that, perhaps, you’d never do or say otherwise. You find yourself gripped by an irrational fear that you can’t shake, that you can’t even recognize as irrational. While I suppose I knew, intellectually, that my son's head wasn’t going to fall off, I couldn’t shake the feeling that it would, and my fear totally consumed me.

My mind was constantly consumed with fears about my son's safety. Whenever I left the house, I would become convinced that I had left my son sitting in the driveway in a carrier, or worse, that I had set him on the roof of the car and driven away.

The thought would begin as an idle notion, but it would grow and grow, until I finally had to reach back and touch the baby’s head, just to make sure he was there. Of course, he always was. I would stroke his peachfuzz head and drive with one hand on the wheel, one hand on the baby, half-twisted between the road and the convertible carseat.

Then there was the time I threw out my middle son August’s favorite Star Wars shoes. Every time I strapped him in the car with those shoes on, I would think: "When the car crashes, his shoes will fall off. They will find them on the side of the road." The image of those red-and-white shoes in green grass would rise inexorably before me. So I threw them out. I couldn’t stand to think of August dead or hurt on the highway. Even now, recalling the image puts me close to tears. I had to toss those shoes. I had to.

When August asked me where the shoes were, I pretended they were lost and that I was looking for them. Luckily, he was only mildly upset, but the image still haunted me. Even now, thinking about it sets my teeth on edge and puts me close to tears.

Every time I strapped my son in the car with those Star Wars shoes on, I would think: "When the car crashes, his shoes will fall off. They will find them on the side of the road." So I threw them out.

Car crashes ranked high on my list of anxieties. I never worried that I’d crash the car on purpose, but I lived in terror that I’d suddenly go off a bridge, or veer off the road and into a tree. My bridge phobia was so bad I did my best to avoid driving over them, but because I live in a town with three rivers, that was close to impossible.

Instead, when I drove the kids to the library or the museum, I took the bridges with multiple lanes, no matter how inconvenient they were, and drove in the left-hand lane. Still, I’d feel my gaze drawn to the water. I tried hard to keep my eyes on the road, but every time I looked down there, I saw my car filling with water. Could you open the windows then? Didn’t they short out? I couldn’t recall.

Again, I didn't tell anyone about these thoughts. I didn't want them to think I was going around the bend, even if I felt like I was.

Worst of all, at a certain point, I decided that everyone hated me. I could twist anything into a perceived slight: a slightly offbeat comment on a Facebook post, a forgotten phone call, a text message that a friend took too long to answer. This ended up affecting my older sons' social lives: playdates were few and far between then, as I didn't think most of my friends actually liked me in the first place. My older sons would constantly ask when they’d get to see so-and-so, and I’d lie and say soon, when really I meant never.

It took prescription drugs to help me: Zoloft, Wellbutrin, and finally Xanax. When I told my psychiatrist about my concerns about my baby’s head falling off, she practically whipped out the prescription pad. I had postpartum anxiety, she told me. These thoughts weren’t normal, but they were fairly typical of PPA. I'd need medication, but I would, eventually, be okay.

And I was. My sons and I started going on playdates again. I stopped thinking everyone hated me. I could drive over bridges without thinking of drowning, and I didn’t worry about leaving the baby in the driveway. The obsessive thoughts finally went away. I found my new normal with three kids. And we were finally free.