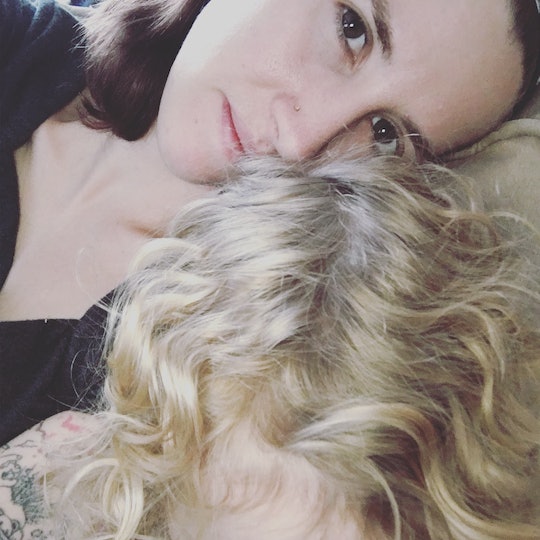 I Had Postpartum Depression, & Talking About It Changed Everything

I don’t remember how or why or the exact moment when I realized it, but I knew I had postpartum depression when my daughter was just 6 weeks old. Secretly, I think I knew sooner — I was crying nearly every minute of every day and I was angry, so freakin’ angry — but it wasn’t until my husband returned back to work and the endless stream of visitors stopped that I knew for sure. It was until the chaotic “new mom period: ended and I was alone, all alone, that I saw the signs and symptoms of postpartum depression in myself.

My husband didn’t know how to help. But he tried; he tried so hard. He’d take my daughter from me as soon as he got home to give me a break and he’d hold her, snuggle her, and give her all the love I wouldn’t, the love I couldn’t (at least not then). He’d bathe her every night and change her diapers whenever he had a chance.

He would do everything he could because he knew I was breaking, he could see it. He didn’t know what it was or how deep the darkness ran, but he knew I wasn’t the happy-go-lucky new mom I wanted to be after our daughter was born. I wasn’t the partner I used to be, and I was just a shell — an outline — of the woman I once was.

But for months that was how I dealt with my postpartum depression: by not dealing with it. I avoided it. I denied its existence. I didn’t know there were resources available to new moms with postpartum depression. I shrugged off each and every erratic emotion, each and every breakdown, each and every outburst. I chocked it up to stress and instead of trying to close the big, gaping wound in my chest, I tried to cover it with cheap drugstore bandages and distractions, like a new haircut, eggs benedict or — my favorite — iced coffee with an apricot scone.

It never worked. Sure, I distracted myself momentarily, but it was ever-present: a pit in my stomach, an ache in my shoulders, a conversation in my head. My life — my broken, chaotic life — was still there. I couldn’t avoid it, didn’t know how to fix it, and after four months, I decided I didn’t want to live it any longer.

I decided I couldn't live it any longer.

If I didn’t get help, I would die.

That doesn’t mean it was easy. In fact, that moment, that first conversation with my husband and, later, my doctor, was terrifying because I had to admit that I felt like a failure. I felt like a terrible mom who couldn’t pull herself together. I felt like I’d lost complete control. But “dealing” with my postpartum depression meant admitting it, admitting something was wrong, admitting I needed help.

I went to my OB-GYN and told him everything: the crying, the anger, the rage. I told him I stopped eating normally, and I wasn't sleeping regularly. The only thing I didn’t tell him about were the suicidal thoughts. I didn’t want someone to take away my daughter. I didn’t want to be put away, and secretly I felt that it was still an option. If I didn’t tell anyone about them, they couldn’t try and talk me out of them; they couldn’t try to pull me back from the ledge.

Within 48 hours I was on Wellbutrin, and six weeks later, I was in a psychiatrist’s office — at the same hospital in which I gave birth — pouring out my heart and soul (well, as much as I could in the hour allotted by my insurance company). But it was my one and only session, because psychiatrists are seen for medication, and I’d stop taking mine a month-and-a-half later, not because I was better, but because I was breastfeeding. Because I was “doing better”.

I finally found help when my daughter was nearly 16 months old, about six months after I gave up breastfeeding — and the associated guilt — and mere days after I enrolled her in part-time daycare. I’d like to say I had an ah-ha moment, but the truth is I had a rock bottom one night while running the streets of Staten Island, my suicidal thoughts became a plan, a plan to keep running until I hit a bridge or busy intersection. A plan to never go home. A plan so clear and terrifying I begged my husband to commit me.

The next morning I started my journey to recovery. I called my insurance company to see what psychologists, psychiatrists, and social workers were within a five-mile radius from my home. With a list of numbers and bus routes mapped (thanks Google!), I narrowed down my options. I made a few calls, found out who had availability — and soon — and who had a female on staff. (Normally I don’t care, but this time I wanted a woman. I needed a woman.) A week later I was on my way to my first appointment.

Here’s the thing: I didn’t want to go and, if I am being honest, I almost bailed. I almost got off the bus two miles too early. I considered staying on the bus three miles too late, but I didn’t. I got off the bus at the right stop, and waited — a trembling wreck — in the reception area. I went. And while I ironically didn’t cry, I was honest. I let go of all pretenses and assumptions of what my therapist would think, and I purged each and every ugly detail of my life. All the while she listened. She was warm and empathetic and understanding. She didn’t flinch when I told her about the suicidal thoughts. She didn’t make me feel bad or crazy. Instead, she made me feel heard. And while I was still broken when I walked out of her office 90 minutes later, I was relieved. Someone knew. Someone heard me. Someone saw me. I was going to be OK.

Thanks to therapy and the introduction of Sam-e, a natural mood supplement, I began to feel better, but it wasn’t until the spring of 2015 (nearly two years after her birth) that I began to feel like myself.

My experience was just that: my experience. What worked for me may not work for anyone else, but talking about it helps. So talk. Talk with your family, with your friends, with co-workers, your doctor, with anyone who’ll listen. You don’t need to worry about explaining it “right” or “sounding stupid”. You don’t need to know what you need or even how to fix it; you just need to say something because the most dangerous thing you can do is suffer in silence. The most dangerous thing you can do is struggle alone.