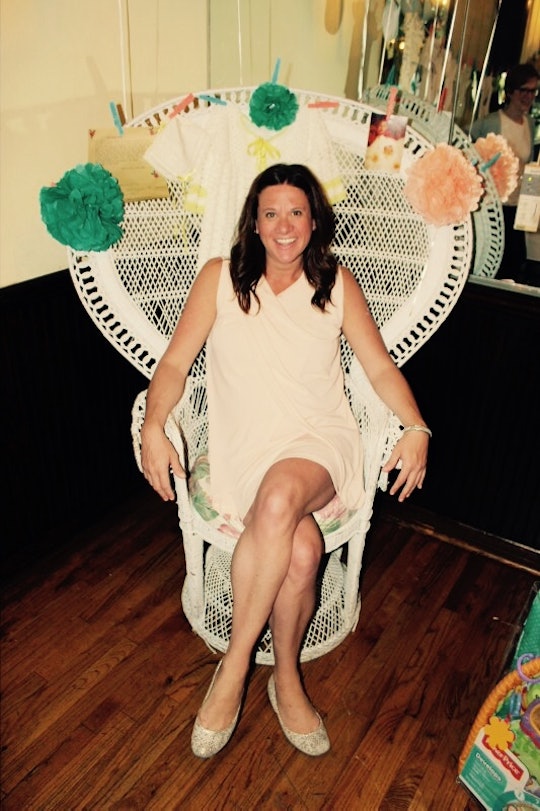 I Had Preeclampsia, & This Is What It Was Like

There were lots of uncomfortable and unusual occurrences I expected when I was expecting, among them were an aching back, being poked and prodded by doctors and nurses, and the overall experience of birthing a person from my body. Pregnancy is full of the unexpected, yet common, and it's shocking how quickly I got used to sharing my body with not only my baby, but dozens of doctors and nurses as well. However, what I wasn't expecting was being diagnosed with a pretty severe pregnancy complication that ultimately lead to being induced three weeks ahead of my due date. I had preeclampsia.

Prior to my pregnancy, I was in the best shape of my life. I exercised five to six days per week, ate a pretty healthy diet (only moderately sprinkled with chocolate), and was no longer taking blood pressure medication for the chronic, hereditary high blood pressure I'd been diagnosed with several years prior. About a year before getting pregnant, I was determined to do whatever I could to be the best possible version of myself for both my family and me.

Which I was, and the first six months of my pregnancy were great: My blood pressure was low, sometimes lower than it'd ever been, and my baby and I were chugging along at a healthy, safe pace. But then, seemingly out of nowhere, I hit month seven and my blood pressure started gradually rising, sometimes randomly spiking, plaguing me with headaches, dizziness, and an overall disconcerted feeling. I was responsible for another life outside of my own, and watching these numbers creep higher and higher was terrifying.

Then finally, at my eight-month checkup, the doctor looked at me with concern in her eyes and explained that I'd no longer be able to commute in and out of the city for work. I'd no longer be able to go to the gym. I'd no longer be able to, well, pretty much do anything, actually, because I was on mandatory bed rest until this baby was fully cooked and ready to come into the world. This was a precaution by my doctor since I was far too swollen and my blood pressure was much too high to risk pretty much any unnecessary movement that would jeopardize the baby and me. I was constantly monitored, put on blood pressure medication, and was frequently reminded about how important it was that I stay on bed rest because of the high risk of kidney damage, seizures, a stroke, or bleeding in my liver, plus the possibility of my placenta failing, rendering it unable to protect my still-growing little daughter.

I started to cry, alone in the doctor's office, convinced that there was something I could've or should've done differently to keep my baby safer.

I'd never known anyone who had to basically stop their life at week 30 of pregnancy and sit and just wait to become a mom. I mean, if anything, I was surrounded by beautiful, healthy women who worked up until giving birth and had all of those typical, movie-version stories of their water breaking while sprinting to Starbucks in between work meetings. Hell, I was the person who joked that I'd probably go into labor at work and just hail a cab and be on my way. I was, in my mind, the Movie Version Mom. In reality, I was swollen and in pain and lying on the couch, counting the movements of my baby each hour to make sure she was still getting enough oxygen. I was preeclamptic. And it sucked.

According to the Mayo Clinic:

Preeclampsia is a pregnancy complication characterized by high blood pressure and signs of damage to another organ system, often the kidneys ... [It] usually begins after 20 weeks of pregnancy in a woman whose blood pressure had been normal ... Left untreated, preeclampsia can lead to serious — even fatal — complications for both you and your baby.

So, you know, that's not terrifying at all. But despite that, I was somewhat casual about the whole thing. I didn't want my family or friends to worry, and I was sure that this would be like everything else with pregnancy: a minor inconvenience for a good cause.

I spent the next few weeks on the couch, my husband, friends, and family cooking, cleaning, and catering to my every want and need. Which oftentimes included having to take me into the labor and delivery unit of our hospital in the middle of the night after signs of preeclampsia reared their ugly heads: high blood pressure, nausea, vomiting, and extreme headaches. But each time, after hours of monitoring, having blood drawn, and peeing into multiple brown jugs over 24-hour periods (to test my kidney function), I'd get sent home. I was "not quite preeclamptic" enough. But I was close.

My healthcare during this time was top notch, and certainly one of the biggest reasons my daughter and I are healthy and thriving today. In the last two weeks of my pregnancy, I saw various specialists and met with my doctor up to three times per week. My protein levels were rising, my blood pressure was dangerously high, but I hadn't quite met the limits needed to deliver my daughter early. I was only 35 or so weeks pregnant, and they wanted to avoid a premature birth if at all possible. My husband and I agreed.

But after being admitted to the hospital a week before giving birth and speaking with the maternal fetal specialist, we went from being moderately worried yet optimistic, to being downright scared. The Movie Version Moments in our heads were replaced by talks of induction, being put on magnesium so I wouldn't have a stroke or seizure after birth, and using a bedpan because I was no longer stable enough to even go to the bathroom on my own because the doctors feared a spike in my blood pressure would lead to inducing immediately. I had compression cuffs on my legs and various monitors on my stomach and arms to keep track of both my baby and me. All I could do was try and stay calm so as not to make things worse.

It was a far cry from how I'd pictured my Movie Version Pregnancy.

Exactly one week later, though, I was induced on the day I hit the 36-week mark. And approximately 27 hours after that, my beautiful daughter was born, all 6 pounds and 1 ounce of healthy baby cheeks and toes, not a sign of the last few weeks of stress etched anywhere on her perfect, little face.

I was monitored, I would recover, and I was off the couch and back at the gym seven weeks later — not because I'm Superwoman or the Movie Version Mom idea I'd thrown out the window weeks ago. I was treated, my preeclampsia was detected early, the right precautions were taken, and my baby and I were just fine.

The care we received, the constant monitoring, and the frank and open communication with our healthcare team gave me the peace of mind to know that we did everything we could to make sure that my daughter and I were as healthy and safe as possible. In the end, I'd do it all again in a heartbeat for my daughter, no question, though I'd be lying if I said I didn't have my moments of fear and anxiety — but I think that's only normal. Just maybe no peeing in brown jugs next time, OK?