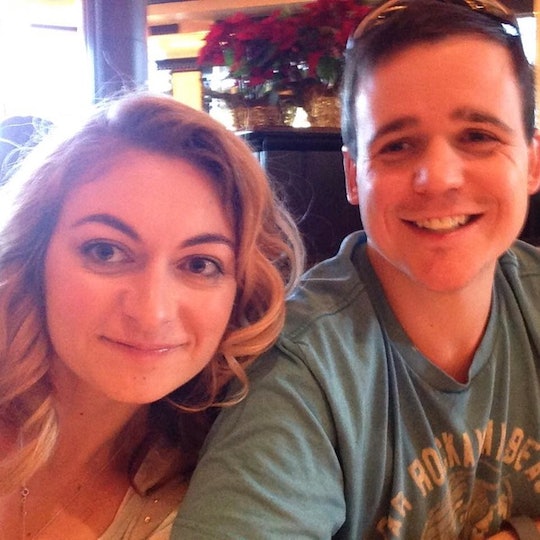 My two toddler sons have been sleeping their own rooms since they were a few months old, but thanks to bad dreams and colds, it's not unusual for my husband and I to find we have some company in our bed at night. When the kids are struggling to sleep we all get more rest when they're in our bed, but the downside to my kids having a poor bout of sleep means the only thing rocking in my bedroom is me in the glider as I try to settle them down at 2 a.m. Our kids are also light sleepers, which means trying to move them down the hall into their own beds once they finally fall asleep is risky business. We get more rest when we let them stay in our bed, but it's awful for our sex life.

Sick and tired of the lack of sex that befalls us whenever our kids end up in our bed, I decided it was time to get creative. Before we had kids we used to have sex anywhere, 112-style, but in the past couple years the bed is like the third person in our relationship. Maybe it was time to take our trysts back outside the bedroom.

At least once a week for a month, if we wanted to have The Sex, we had to get it on someplace other than our bed. This way we'd have a list of locations to draw from the next time the kids had taken over our mattress but we wanted to have some x-rated fun. Is there a reason why most sex happens in a bed? Is it the most comfortable place to get it on, or are we just too lazy to get up and move the party somewhere else. Here's what I learned.

The First Location: The Couch

We decided to start off with the couch because it was like sex-outside-of-the-bedroom training wheels. Couches are soft like a bed, and it's not like we've never done the deed on one before. Plus, our couches had slipcovers that were gross and needed to come off anyway so this was a good way to make sure we actually crossed that off our to-do list.

I remembered why we stopped having sex in the shower once we became parents — because it's impossible to hear the baby monitor over the running water. Instead of making moaning noises I was saying, "Shhhhh!" and stopping to stick my head out the shower because I was sure I heard someone crying.

As you might expect, the couch was fine. Our positions were somewhat limited due to the narrow cushions, but in a pinch I realized it's a handy place to get it on when you can't get to a bed.

If you're more sexually adventurous than me, you might be rolling your eyes right now, but hey, twins take a lot of energy, so it's been a long time since we got steamy in the shower. After watching the ending of Gone Girl I had the brilliant idea that my husband and I should hop in together, and he was more than willing to oblige.

Yes, you read that right. I threw all the manufacturer's safety regulations about proper bounce house weight restrictions out the window and had sex in a children's bounce house. And it was everything I hoped it'd be — and then some.

We were just getting into a groove when I remembered why we stopped having sex in the shower once we became parents — because it's impossible to hear the baby monitor over the running water. Instead of making moaning noises I was saying, "Shhhhh!" and stopping to stick my head out the shower because I was sure I heard someone crying. Being so distracted turned my partner off, and the cold air I was letting into the shower every time I opened the door wasn't helping us stay in sexy mode.

We took a quick timeout and decided to move the party to the bathroom counter, an old favorite from the apartment we rented before we had kids. This way I could hear the monitor, but we were still out of the bed. But the height of the counters in our current house is different than in our old place, so sheer physics said this wasn't going to work. Frustrated on several levels, we gave up and went to bed.

Getting It On In Front Of The Fire

Even though the calendar said it should be short-sleeve weather, winter's been hanging around like an annoying party guest who can't read your social cues telling her to GTFO. Since it's been so cold at night I decided to try that whole sex in front of the fire thing from every cheesy romance novel ever. Chatting by the fire was romantic and it was nice to get to talk to each other without one or both of us being distracted by our phones. I felt more connected to my partner from all the talking, so when we finally got down to business I was feeling pretty good... until I wasn't.

Because as sexy and chic as sex in front of a fireplace may seem in books or movies, in real life the floor is hard, cold wood, and if you're in my house it's also coated in cracker crumbs, because even though you vacuumed yesterday you have twins who eat 11 meals a day like hobbits. Because of that we tried switching things up, but then my husband was the one complaining his back hurt. Maybe we're just old or maybe this is why those scenes usually feature a bearskin rug, but sex in front of the fire was not nearly as much fun as you'd think.

Take Two: A Fort For The Fire

The disappointment over our semi-successful attempt to have sex in front of the fireplace stuck with me, and a few days later I saw the opportunity for a re-do. The boys had convinced me to make them a fort under the dining room table out of blankets, cushions, and chairs and they treated the fort with such reverence that it was still standing after they went to bed.

My partner and I thought it could be a fun challenge to see if we could both squeeze into the fort and have sex without knocking it over. But something about being in a small enclosed space with him made me feel silly, and we started making up stupid fake ghost stories and trying to scare each other. It was fun to be playful with him like that. Our schedules are so busy and the kids take up a lot of energy, so it's rare that we get to laugh and talk about nothing important together. Even though this was part of an experiment, having sex in the fort felt natural, not at all like it was something we were doing because we had to. Though the floor was still harder than my nice comfy mattress, having easy access to pillows and blankets made things easier to manage, and the small space we were in made doing the deed feel special, clandestine even. I'm not saying we'll erect a blanket fort ourselves just for this purpose, but if the boys ask to make one again next week, I'm certainty not going to stop them.

Yes, you read that right. I threw all the manufacturer's safety regulations about proper bounce house weight restrictions out the window and had sex in a children's bounce house. And it was everything I hoped it'd be — and then some. Now before you start thinking that I'm a gross person who had sex in public and left bodily fluids out there for innocent kids to play on, worry not. We have a tiny bounce house in our basement playroom that's sized for two kids, and I wipe it down regularly.

The total weight limit on the bounce house is 75 pounds, so I've never been in there except to pull out a crying child who got too excited jumping and bit his own lip. My partner was worried we were going to pop it, but I really wanted to do this, so I used all my powers of female persuasion to convince him it was going to be fine. I rationalized that because we weren't planning on jumping or standing up, the weight limit might not apply to us. I know that's not how these things work but, whatever, I wanted to have sex in a bounce house and this experiment was my chance.

It was so much fun — better than my wildest expectations. When we'd go to move we had to roll like seals because of the air underneath us, and the surface was soft and bouncy, which meant we had to exert less effort but got great results, if you catch my drift. The next day I noticed the main air chamber was looking more than a little flat, but that could just be a coincidence, after all these things lose air over time, right? I filled it back up and am waiting to see what happens, but just to be safe I'm going to try and keep my partner out of the basement for a few days and hope he doesn't notice.

Is Sex Better Outside Of The Bedroom?

After a month of trying sex in locations other than my bed, I can say without a doubt that there's plenty of good reasons why most sex happens between the sheets. It's soft, it's warm, and there's lots of room to try out new things. That said, whether it's because your bed has been invaded by kids or just because you're looking to spice things up a bit, moving beyond my mattress' comfort zone was a fun way to reconnect with my partner and remember that just because we've been together for years doesn't mean our sex life has to be routine. Oh, and if anyone knows where I can get a small bounce house for cheap, by all means, please let me know.