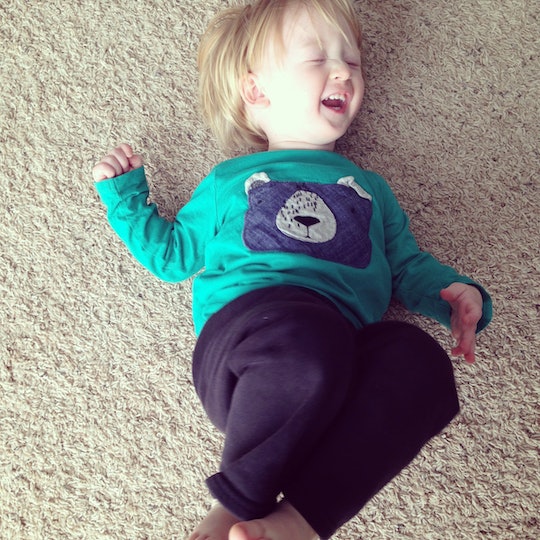 I Hate The Toddler Stage — There, I Said It

I’ll be the first to admit that my toddler is wildly and undeniably cute. I am constantly awed by how lovable he is, and the fact that he is my last baby makes him all the more precious to me. He’ll sometimes wake up in the morning and say, “Hey mama, guess what? I love you!” I melt, truly, I do. However, I’m also just going to come out and say it, I hate the toddler stage, and no amount of sweet toddler babble or chubby cheeks is going to change that.

Because on the mornings he doesn’t wake up with proclamations of love, he’s usually waking up in a pee soaked bed because he has Houdini-ed his diaper off from beneath one of the snapped onesies I bought, in bulk, to prevent this very thing from happening. And in his piss-soaked fury, he decides he does not want to take a bath and would really prefer to eat candy. It is 6am, but eating candy while wrapped in urine-covered blankets definitely seems like the logical choice for him right now.

In fact, whenever candy enters his mind, it seems like not only a logical choice but the only acceptable choice. If I offer him oatmeal for breakfast, but because he also caught a glimpse of the chocolate chips sitting in the pantry, it’s clearly time to lay on the kitchen floor and scream, red-faced and drooling, until it’s time to take his older siblings to school a whole hour later. There is almost certainly a point where he forgets what he is wailing about, but don’t worry, that doesn’t stop him. If anything it makes him more resolute than ever in his belief that he has been wronged, and his outrage must be made known.

Food is pretty much always a source of turmoil with a toddler, because they don’t eat much, and they are either way too decisive (see “candy”) or prone to sudden changes in appetite, but only after you’ve started making them food. He really really wants macaroni and cheese until said macaroni and cheese is in front of him. The rage then comes on fast. He starts screaming, “I don’t want mac and cheese!” while simultaneously refusing to answer the question, “THEN WHAT DO YOU WANT?”

Or he says he wants a cheese stick only to notice a banana nearby that he would also like to take a single bite of, and then he definitely wants a graham cracker — only a full sized one will do — to take another single bite out of before proclaiming that he needs a grilled cheese, and he needs it five minutes ago because he is starving.

He does not want to nap, when everything about his behavior is screaming “Oh my god, I need sleep unlike anything I’ve ever needed before.” He flails and kicks as I change his diaper, crying that he is not tired, when he is nothing if not unreasonably tired. He wants water, and his blanket, and his dog stuffed animal, GOD NO NOT THAT ONE, yes that one, and he wants a snuggle, but not from me, from his dad, who is at work for another five hours. Let the meltdown commence.

While I don’t want to paint a picture of utter misery (because he is, at times, a basket of rainbows and puppies, I swear), the truth is, living with a toddler is like tiptoeing through a field of live grenades. It doesn’t matter how quick or careful you are, you are screwed. They reach their limit and detonate. Doesn’t want to wear that shirt — BOOM. Don’t have the right kind of cereal — BOOM. Suddenly wants to teleport to Nana’s house and must face the fact that teleportation doesn’t exist — BOOM.

I of course like the kid in spite of all of the above. My toddler is my most frustrating and difficult child by a long shot right now, but I also love him more than I can bear a lot of the time. Those good moments in between the angry outbursts? Those make it all — OK, most of it — worth it. Those and the fact that I get to eat all the chocolate chips I want.

More Like This
17 Best Potty Training Products For Toddlers
26 Toddler Lunch Ideas They’ll Actually Be Excited To Eat
Adult Gymnastics Brought Me Back To Myself
This Mother’s Day, What I Hope For Is Resilience