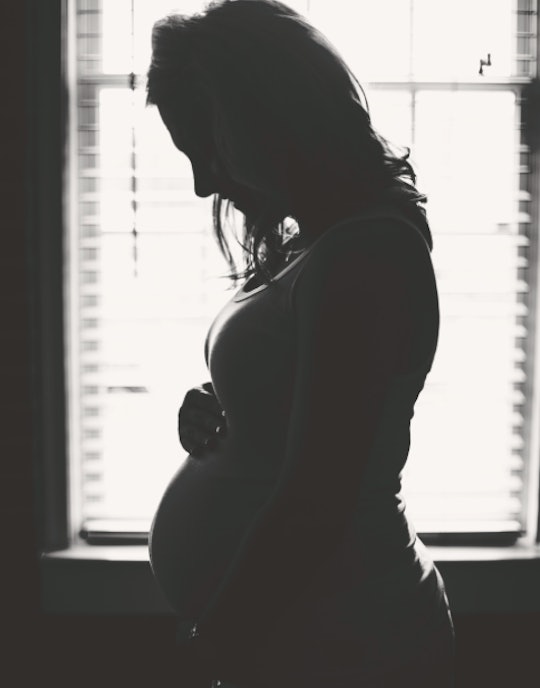 Society dictates that pregnant women must love being pregnant. But I didn't. I hated being pregnant. For the most part, we buy in. We snap pictures of beribboned bumps. We come up with cutesy ways to announce the big news on Facebook. We buy closets of cute maternity clothes; we report on every kick and craving. Pregnant women glow. They bloom. Their puffy feet might not fit in their shoes, but damn, are they supposed to feel adorable. Ignore the stretch marks, society tells us. Believe in the bump and eat another helping of Häagen-Dazs.

My first pregnancy was hell. I spent each subsequent pregnancy thinking it might get better, but to no avail. I was pale and puffy. I gained an incredible amount of weight. I had numerous health problems and couldn’t walk up a flight of stairs without huffing and puffing. I wasn’t believing in the bump. I was counting the days till delivery — and I was only in my first trimester.

With my first son, I had hope. I peed on a stick and hopped straight into baby fever. It lasted for a week. And then, slowly, at five weeks, I started the inexorable downward slide into perinatal depression. First, I became convinced my husband would die if I let him out of my sight. Then I decided I’d made the most colossal mistake of my life. I hated babysitting! Why would I think I could parent a child? I went to the hospital because I was bleeding in early pregnancy. But when the ultrasound confirmed I was still pregnant, I became hysterical. By that point, I’d been sobbing for three hours straight, so no one really noticed. I was pregnant, and depressed.

By the end of my pregnancy, I was on a higher insulin dose than most OBs had ever seen. I’d also gained 100 pounds, so much that my anesthesiologist fat-shamed me for having “too much weight” around my spine as he tried to land my epidural.

My depression only worsened as my pregnancy surged forward. And so did my nausea, until I was vomiting everything I’d eaten. My nurse-midwife prescribed Zofran, which stopped the vomiting, but no one bothered to read the side effects: more depression. It also gave me migraines. Yeah, I had a cute bump, but I was too miserable to care. When my husband left me for a concert, I cried for three days straight. I stopped speaking to my parents on rather specious grounds.

Eventually, I got depression medication. I also gained 45 pounds and endured the gross fat-shaming that came along with it. I wasn't allowed to be cute, because I’d gained more than the recommended 25 pounds. All the sickness left me exhausted and breathless, too tired to walk far. I developed sciatica. I swore I would never take mobility for granted again. And that was the good pregnancy.

I was hospitalized for fluids and nutrients. I missed Easter. I missed the entire month of May. Other people took care of my kids. For an attachment parent and stay-at-home mom, it was devastating.

The second time around, we hoped a good diet could stave off the nausea. We were wrong. I started vomiting in earnest at six weeks, and by eight weeks, I was bedridden. We discovered Zofran made me mean, and so I had to take Phenergan, a severe depressant. I slept for upwards of 16 hours a day. My husband took care of our son, whom I missed desperately.

This pregnancy was planned. But nothing prepares you to basically abandon the care of your baby to another person. Nothing prepares you for the sudden onset of chronic illness. I might have been cute, I’m not sure; I didn’t put on makeup or really leave the house for three months. We forwent the adorable Facebook announcement and instead begged for help.

The Phenergan and the sleeping really sapped my energy that time: it literally wasted my muscles. So I was even weaker than I’d been the first time. I couldn’t exercise; I couldn’t even walk up the stairs. The fat-shaming reared its ugly head even higher as I packed on 70 lbs. I had to eat, but I couldn’t exercise. I couldn’t wear the cute maternity clothes.

The third time, though, was the worst.

With baby number three, I was formally diagnosed with hyperemesis gravidarum. I took Phenergen again, which made me sleep. I was hospitalized for fluids and nutrients. I missed Easter. I missed the entire month of May. Other people took care of my kids. For an attachment parent and stay-at-home mom, it was devastating. I wasn’t showing off my early bump. I was sleeping.

I didn’t glow; strangers didn’t try to pet my belly. I was puffy and pale, sick and sleepy. I could hardly pick a Lego up off the floor — and not for lack of flexibility. I could hardly care for my own children.

I started packing on pounds despite the vomiting, so I took my glucose test early — and failed miserably. I was put on Metformin and given tools to stab my finger and measure my blood sugar. My weight kept climbing. At about 12 weeks, I was on injectable insulin. When most pregnant women are supposed to be flitting around in bump-tight dresses, I was stabbing my thighs with a needle. By the end of my pregnancy, I was on a higher insulin dose than most OBs had ever seen. I’d also gained 100 pounds, so much that my anesthesiologist fat-shamed me for having “too much weight” around my spine as he tried to land my epidural.

In addition to the gestational diabetes, I developed severe anemia. At a waddling 34 weeks, I had to coordinate babysitters to watch my sons while I was admitted to the hospital for the morning. I sat still while some ungodly amount of iron dripped into my veins. The next two days were a mist of skeletal pain — a side effect no one had told me about. I developed severe, unsightly bruising at the IV sites. And I had to do this four times.

Sure, I picked out baby names. I sorted baby clothes; I wore dresses that showed off my boobs and my belly. I felt the baby move. But each time I was pregnant, I didn’t enjoy it. I didn’t glow; strangers didn’t try to pet my belly. I was puffy and pale, sick and sleepy. I could hardly pick a Lego up off the floor — and not for lack of flexibility. I could hardly care for my own children.

Pregnancy is so hard on me that while we want another baby right now, we dare not do The Sex. Pregnancy is great for the healthy women who don’t experience a bump, bruise, or prolonged bed rest — even on their worst days. But growing a baby is hard work. It’s even harder when you’re sick in mind and body.

Society tells us pregnant people should adore being pregnant. I didn’t. Luckily, I’m not alone. Kelly Clarkson said she didn’t feel the “glow,” and Kim Kardashian’s pregnancy went worse than she, or anyone, ever expected. “Everything hurts,” Kim has said. And her sister, Khloe, added that when Kim was pregnant with North, she just “crie[d] all the time.” And normal women feel the same pain. One expectant mom shared that she “can’t stop feeling like sh*t all the time." Another woman notes that there was, at no time during her pregnancy, a moment when she could not smell herself. She laments the peeing, the nausea, the lack of “glow,” and the horrible sex. So my pregnancy-hatred isn’t unique. But it still sucks.