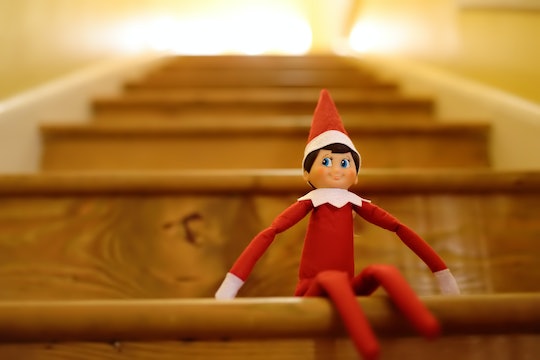 I Hated Elf On The Shelf, & Then One Person Changed My Mind Forever

Of course, Shelley wasn't my "ex-wife-in-law" at the time. She was my husband's second wife, and with two boys of her own, she was actively pro-Elf On The Shelf. My boys, then 8 and 5, were especially excited for their first Christmas with their new brothers. What I didn't realize until Clyde covertly arrived at my doorstep, unceremoniously swaddled in a plastic grocery bag, I believe, was that I'd be expected to wholeheartedly adopt this new tradition myself on the nights my boys were with me.

It's a massive understatement to say my ex and I have had some extremely bumpy times in the nine years since we separated. I can still remember that the visions dancing through my head when Clyde arrived unannounced were not of sugarplums but a slow-burning "How did I get dragged into this?" — admittedly laced with some very un-seasonal expletives. I took the high road, however, and went for a tactical approach of putting my boys first and adopting a stance of straight-up passive aggression.

Whenever I could come up with a way to dust Clyde with some type of powdery substance, I'd go for it. Glitter? Check. Slightly assertive positioning? Yep. I'd tiptoe as close to the edge as I could with the little red monster, gritting my teeth behind my plastered-on grin all the while.

Make no mistake, my beef was not with Shelley. It was with that damn Elf. I just don't love the whole thing.

At my ex's insistence, Shelley made the effort to become friends with me, as the co-parent of these kids that she was stepmothering — and it's a damn good thing he did and she followed suit. Just briefly into their marriage, I sustained a case of herniated discs that was incredibly debilitating and resulted in unsuccessful surgery followed by a clinical trial that ultimately fully relieved the pain. Sadly, however, once I was free from the back pain, I plunged into a deep, deep depression, the worst of my entire adult struggle with bipolar disorder. It shook not only me, but my children, and could easily have taken my life.

The people who were there for me the most during this time? My ex-mother-in-law, and Shelley. My former MIL held my hand through some of the ugliest times, most vulnerable times I've ever experienced, and provided a stable environment for my boys. Shelley, with her love and warmth — the kind I was completely incapable of generating for anyone, including myself, at that time — stood alongside my ex in the hole that I'd left, and was all the mother I could have asked for while I couldn't handle it myself. These are kindnesses, true gifts, that I could never repay.

Once I got back on my feet, Shelley and I gradually became closer, until ultimately, we became actual friends. It was a slow burn for us, but for whatever reason, I think of the consummation of our friendship as the night we had dinner together and watched the Diane Sawyer's Caitlyn Jenner special together with her oldest while the younger boys did their thing. If that's not primo bonding, I don't know what is.

Soon enough, we started going places together on the regular to the point where it became cumbersome to explain our relationship to one another. I started referring to her as my "wife-in-law," and since I live for a laugh, it stuck. Ultimately, unfortunately, Shelley's marriage to my ex did not, and after some considerable trials and tribulations, and heartache on her part and that of my boys' father, she's now my ex-wife-in-law.

It's funny, we were at the Barnes and Noble recently, finishing each other’s sentences at the register, and the cashier said, "You all must be sisters." When we corrected her and told her we're actually ex-wives-in-law, she laughed uproariously and said we'd made her day, and that there should be more people in the world like us. I'm not sure if it was the offbeat relationship that we'd sprung on her or just an overabundance of holiday spirit, but I chuckle all the time now whenever I look at Gerard, our new Elf (Shelley got Clyde in the divorce, but my side of the family now keeps up the custom). Even when you go through bad times, you come through on the other side with good stuff — sometimes the people, or "people," you least expect.

Even if I sometimes curse that little guy when I'm up in the middle of the night moving him. But you didn't hear me say that.