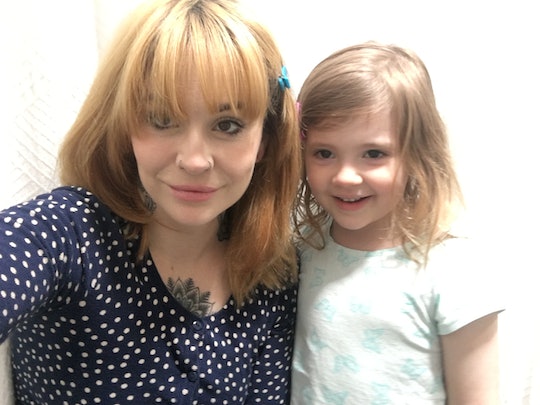 I Have A Child On The Spectrum, & I'm A Stronger Parent Because Of Her

My ex and I sat at the white plastic table across from our daughter’s preschool teachers, twin printouts of her progress set out in front of us. Every parent wants to go to their first parent-teacher conference and be showered with praise of their offspring’s genius, and that’s exactly what we were hoping would happen.

“Let us begin by saying that Raven is truly a delight, and we love having her,” my daughter's teacher started out by saying. ”But we’ve noticed some symptoms, and we have some concerns…”

I inched forward, my breath caught in my throat. I, too, had noticed some things about Raven that differed from the norm. Sitting across from my daughter’s teachers and listening to them list her behaviors and traits felt validating, because I now understood a possible cause for her seemingly-out-of-place behavior.

At the end of the meeting, Raven's teacher told us to take her in for multiple assessments, and she was later diagnosed with Asperger Syndrome. I had never imagined that my child would become a statistic, but yes, I have a child on the spectrum, and I am a stronger parent because of her.

According to the Centers for Disease Control, 1 in 68 kids has characteristics of an Autism Spectrum Disorder, including Asperger Syndrome, Rett syndrome, and pervasive developmental disorder not otherwise specified (PDD-NOS). These likely genetic conditions are characterized by difficulties with social interaction, verbal and nonverbal communication, and repetitive behaviors.

In many ways, Raven is brilliant. By the time she was 18 months old, she could read and recognize the colors of the rainbow and the numbers one through 10. And at the age of 5, she regularly puts herself to bed by reading chapter books to her stuffed animal buddies. Yet while she excels in some things, she lags behind her peers in others.

"Children with autism often perceive the world as a confusing, chaotic, and overwhelming place where many unexpected and unwanted things happen."

Raven struggles with sensory input issues. She doesn't like unexpected loud noises, which means going out in public can sometimes be difficult. Going into a public bathroom, where toilets flush at loud volumes, can be terrifying for her, so she didn’t stop using diapers until she was almost 5. (It’s odd to hear the sentence, “I would be honored to play Legos with you" from a kid still wearing a diaper.) During birthday parties, we move away from the group when it’s time to sing “Happy Birthday," and the Fourth of July has never been a fun fireworks event.

These issues are common for children with autism, says Jessi Dey, a licensed marriage and family counselor in Portland, Oregon who worked with autistic students in mainstream classroom environments. “Children with autism often perceive the world as a confusing, chaotic, and overwhelming place where many unexpected and unwanted things happen,” she recently told Romper.

Kids on the spectrum also might have delayed motor development skills. It’s not uncommon for them to be late learning how to use a fork or spoon, ride a bike, or catch a ball. “She seems to have difficulty moving her body,” Raven’s teachers told us, and indeed, this has always been true. Raven isn’t good at riding bikes, and she often waddles and trips over nothing. I used to wring my hands in embarrassment at her inability to navigate the turnstile at the library, while another woman behind us grumbled a frustrated, “EXCUSE ME" and request she move out of the way.

Yet because Raven does not look physically handicapped, people often do not immediately realize that her motor skills are impaired. Parenting her is a constant reminder that many people have physical challenges, whether one can see them or not.

I don’t know many kids who know the terms "trilobites" and "diurnal" and can also give a detailed explanation for how to draw the solar system, but Raven does and can.

Raven has intense interest in a few, very specific things, which applies to many kids on the spectrum: “Many autistic people have restricted topics or activities that are of interest to them and a strong desire to do things in the same way at the same time every day,” Dey told Romper. Just the other day, my babysitter informed me that Raven had told her "trilobites don’t have eyes" and that we are "diurnal animals." (I had to Google both terms, but trilobites are cave dwelling animals, and "diurnal" means that we sleep at night and are active during the day.) I don’t know many kids who know those terms and can also give a detailed explanation for how to draw the solar system, but Raven does and can.

Nonetheless, I worry that school will be tough for Raven. I’m particularly concerned that she’ll get bad grades due to lack of interest in the school curriculum. But I also know that when youths and adults are allowed to harness and explore their interests in school, they often excel in relevant fields: architecture, design, engineering, art. My kid could very well become an engineer or a CEO with just a few social quirks, which certainly would not be unheard of.

I try to encourage Raven's interests. I’ve told her, “Wow, what a beautiful painting!” “You look very pretty today,” or “I really like how you built those blocks to make a tower." All of these things have triggered an upset response from my kidlet. “Don’t say that to me!," she'll say, shuddering with her arms wrapped around herself for comfort. “I just don’t like it!” (This is also not uncommon: A kid on the spectrum may also respond in an unusual way when others show anger, distress, or affection.) It’s not that I’ve said something negative — I know that I haven’t. But being the focus of attention makes her very, very uncomfortable.

I will not force my daughter to try to make her behavior more normative, just so other people can feel more comfortable.

My child does want praise, but only when she's asking for a compliment. And truth be told, I am neither upset nor surprised when she reacts this way, because as an adult who has lived with perpetual anxiety, I understand what this is like. In fact, because of my own child’s early assessment, I have found a way to contextualize my own lifelong battles with anxiety and depression; in fact, some research has suggested a link between maternal mood disorders and children on the spectrum, indicating that there's a possibility I might have passed these traits onto my daughter.

I found my own path in life, and I’m thriving in my own way. But I wish that society wouldn't have a framework for how people’s brains are “supposed” to function. As children and teens and adults, most of us spend so much time blending in with our peers — and to what end?

I won’t hold my kid to some ridiculous standard of learning or self-expression, simply because her brain doesn’t function the way that many others do.

For people with mood, anxiety, and sensory disorders, trying to “fit in” becomes the most stressful aspect of life. I won’t hold my kid to some ridiculous standard of learning or self-expression, simply because her brain doesn’t function the way that many others do.

When she becomes a teenager, it's possible that she might experience anxiety, depression, and difficulty fitting in with other people, as some people on the spectrum do. I’m ready to support her creative and technical skills, and to defend her from people who might tease her for her sometimes halting speech, or her waddling walk. I'm ready to support her, because she does not have to conform to some arbitrary standard to achieve success, and her life does not have to be “perfect” for it to be beautiful.