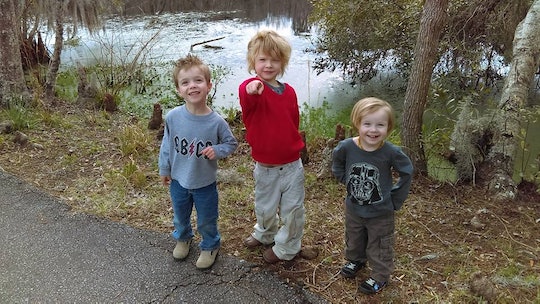 I Have A Family Bed & This Is What It's Like

I call it my bed, but it’s not my bed anymore, not really. It’s a family bed. Five of us sleep there though some nights it's somewhere between five and eight, if you count our pets: a Boxer, a German Shepherd, and a German Shepherd puppy. We long ago gave up on the notion of something resembling a real bed and came up with what we jokingly call a "California Kong": a queen and a twin mattress, side-carred and dropped to the floor. We keep tons of pillows on the bed, one row against the wall to prevent the kids from trapping themselves, one row on which to put our heads, another row on which to put our heads and cuddle and block off the baby’s side. We keep two sets of covers, one bedside table, a floor lamp, and the remotes to the TV. The bed takes up most of the room. We’ve learned to live with that.

The kids have a bedtime routine. First, they have ice cream or a popsicle. Then their last drink of the evening. They say they don’t have to pee. Really, they have to pee and will creep to the bathroom later. They put on their pajamas, an epic feat replete with much coaxing and annoyance on the part of our 4 and 6 year old. The baby will climb to the top of the changing table. He gets a nighttime diaper and footie pjs. Then everyone will disperse, the toddler to the family bed, the other two to the top of their Ikea bunk bed. But they always end up back in ours.

My husband and I divide and conquer. I turn off most of the lights in our bedroom, settle the sheets and pillows. The dogs come in and arrange themselves, one on the floor, two on the bed, the puppy closest and most pesky. I tell the toddler to go “lay down where we breastfeed.” He scoots over to the far side of the queen bed and burrows under the covers. I drag him out, put my arm under his head, and bare whichever breast hasn’t been nursed on lately. Sunny, my son, latches. He sucks, sucks, sucks in the darkness. I’m proud that as old as he is, at 2-and-half years old, I still have milk for him. We cuddle. This is one of my favorite times of day. He drifts off, sometimes in five minutes, sometimes in 45. I know he’s asleep when my nipple slips from his mouth. I disentangle myself from the covers, get up, and leave the room. The dogs all follow.

They don’t come in any particular order, but they come.

The older boys clatter up to their bunk, my husband behind them. He lays between them and reads a book one of them has picked, a process highly contentious and often fraught with tears. They say their prayers. Then they go to sleep. My husband plays on his phone. Inevitably, each wake because they need to pee. August and Blaise go one at a time. Blaise, our 6 year old, then needs a drink. He usually drops off first — he can fall asleep without touching someone. Four-year-old August, however, takes longer. I’m usually out before my husband, who, while he doesn’t exactly enjoy getting them to sleep, enjoys the phone time.

Finally, they’re asleep. Sometimes my husband and I get to hang out, and then we prepare to sleep ourselves. We curl up on the near side of the bed, in the single, with a pillow for him and two for me. The puppy jumps up. He lays with me for a few minutes, then goes over to lay with the baby, something we try to prevent with much hissing and gesticulation. He has a tendency to sit on the baby’s head and wake him up. Finally, he contents himself with the bottom of the baby’s side. Our elderly boxer claims the bottom middle of the bed. And once everyone is settled, finally, we spoon to sleep. These are the last quiet moments we’ll have in the bed.

They don’t come in any particular order, but they come. First, one older boy will creep in, and he’ll lay in the slim space behind my husband. Later, another boy will creep in, and I’ll be shouldered aside, to the middle of the bed, perilously close to the toddler. I’m paranoid my pillow will suffocate him, so I ditch it off the bottom of the bed. The dogs have maintained position, so the Boxer, and sometimes the other German Shepherd, prevent my legs from stretching out. This is radically annoying, but my other choice is to cuddle the baby and hope the puppy isn’t in the way. I crook my legs, sigh at the whole situation, and stay put.

Sure, I wish each boy slept in his own bed, stayed there all night, and left me with my husband, but then I think of the benefits my children enjoy from sleeping in a giant heap like puppies.

Then the baby cries. I roll over, bare my breast, and feed him. Usually, this goes fine, and I drift right back to sleep. But sometimes he kicks and punches and grabs my other nipple, which leaves me in a desperate half-sleep wondering if I might as well get up again. We’re starting him in his own bed soon and night-weaning him. But much like his brothers still do, I think he’ll still come into our family bed, ready to cuddle.

In the mornings, my husband sneaks off to work. He’s slept cruciform all night, because each boy wants to sleep on his arm, so his back is usually killing him. I awake holding the baby, with the two other boys cuddled together on the near side of the bed. The dogs have all retired to the floor. My oldest wakes first, often before me, and turns the TV on. The baby and I wake together. I breastfeed him on the couch as soon as we get out of bed. My middle son sleeps in, sometimes till 11 a.m.

It may not seem like it, but the family bed situation works for us. Sure, I wish each boy slept in his own bed, stayed there all night, and left me with my husband, but then I think of the benefits my children enjoy from sleeping in a giant heap like puppies. They get cuddles from their parents, and are secure in knowing they can have those cuddles whenever they want it (like, every night). It’s a bit of work on our part, but truthfully, we like snuggling with our kids. It gives them an automatic safe place. And while they may be scared of the dark sometimes, they don’t have blankies or lovies or suck their thumbs. They have us and the immediate assurance that they're safe and OK and cared for. And while some people may pee the bed sometimes — I won't name names — we just change the sheets in the morning and move on. It’s warm. It’s cuddly. It’s got too many dogs. But it’s us, and we wouldn’t change it.