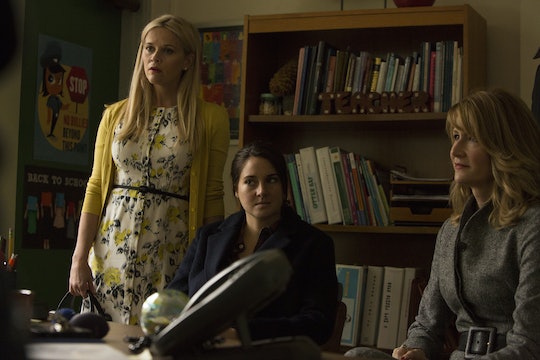 I have a mom nemesis (or "momesis" for short). You know who I'm talking about: the woman at the bus stop, play group or PTA meeting who not only rubs you the wrong way, but goes above and beyond to make your life miserable. Maybe you two just don't get along, or maybe there's some beef between your kids and hers. Either way, she seems to exist for no other purpose than to make life difficult for you.

I hate using the word “nemesis" to describe a fellow mom. After all, motherhood is hard, and we ladies have to stick together. But there's just no other way to describe this woman.

She wasn’t my mom nemesis starting out. In fact, I first knew her as the struggling single mom at my bus stop. Every morning, when I dropped off my son Branden at the bus stop, I saw her having a hard time making it to the bus, so I gave her my phone number and told her to shoot me a text if she was running late, so I could tell the bus driver to wait for her. During those brief moments when our paths crossed every day, I saw her drowning in the duties of motherhood, and I wanted to help in any way I could. Instead, things pretty much went downhill from there.

The second I gave this woman my phone number, she started taking advantage of the gesture. I'd get phone calls at 6:00 a.m. on weekdays to inform me she was already running behind, and then again every day at 4:30 p.m. I was always happy to help, but it got to a point where I couldn’t get her son off the bus every single afternoon and wait 30 minutes for her to finally arrived. I had an infant who needed me. I politely let her know that I couldn’t do this everyday. and she seemed to understand. For a while, the calls stopped.

A few months went by. One day, I got a call from the Assistant Principal of our kids' school. He said her son was suspended from school for hitting my son in the bathroom. There were witnesses, and it looked like he'd just hit my kid for no reason. Another parent had told me that her kid had a history of this type of behavior, so I made the choice not to address with my momesis. I figured that she was going through enough, and he was being punished for his actions. But what followed over the next few months made me feel like I was living out Big Little Lies in real life.

“Don’t say anything to that crazy mom,” he added before hanging up.

One morning, bright and early, I received a text from my momesis. It was a lengthy paragraph accusing my son of not only bullying hers, but also attempting to strangle her son on the bus. Knowing what I knew about her son's history of violence, I ignored the text and decided to speak to her at the bus stop later that day. That was a big mistake.

Around 4:00, I started getting really aggressive texts, back to back to back. From what I could tell, her son had a phone on the bus and was texting her, and she was relaying what had happened to me. Apparently, our boys had an altercation during the bus ride home and I was getting an earful about it, even though neither of us were actually there to do anything about it.

On the way to the bus stop, I was shaking with rage.

At that moment, my blood started to boil. "I'm sorry about whatever was happening, but it doesn't sound like something my son would do," I texted her. "We'll discuss it at the bus stop with the kids and the bus driver."

She started cursing at me. I told her not to talk to me like that. "I talk any way I damn well please. It's my mouth, not yours," she texted me.

On the way to the bus stop, I was shaking with rage. I’d seen her get into fights with other parents before, and I knew that she was capable of extreme aggression. I kept telling myself to keep my cool, and that she wouldn’t touch me while I was babywearing a newborn.

Then my phone rang. This time it was my husband calling to tell me that the school had called him, and that our son was being suspended. He told me to be calm at the bus stop and to grab our kiddo and go home, where we would deal with this as a family. “Don’t say anything to that crazy mom,” he added before hanging up.

I was so confused. This didn’t sound like something our son would do. Don’t get me wrong: he’s no angel, and third grade had been a tough year for him. But I never thought he would ever put his hands on another child.

Maybe I'm just being paranoid, but I feel like my momesis is watching and waiting for my son to actually mess up, so she can call him out on it.

When he got off the bus, he ran towards me, “Mooommmmmyy!” he said. I scooped him up and walked briskly back towards our home. I was furious. We got in our elevator, and he asked me what was wrong.

“What do you think is wrong? Do you not remember what happened on the bus to and from school today? You’re being suspended for putting your hands on that other boy!” I snapped.

He started to cry. Through his tears, he sobbed, “Mom, that wasn’t me, it was the other Branden.” I realized what had happened: there was another boy on his bus named Brandon, and the other mom had confused my child with him.

I immediately called my husband, who called the principal back to explain what had happened. 20 minutes later, I got an apologetic text from my momesis. She'd lashed out at me and gotten our child suspended before even checking that her son had his facts straight. We got the suspension reversed.

To this day, however, there's still a dark cloud that hangs over that bus stop. For some reason, my momesis still holds a grudge against me. She makes unnecessary comments, like telling me that she feels my son is playing too far from where I’m standing, or pointing out that she thinks the weather is too cold for my daughter to be outside. Maybe I'm just being paranoid, but I feel like she’s watching and waiting for my little guy to actually mess up so she can call him out on it. It’s a horrible feeling.

Just like we have to worry about our children being bullied, there are moms who bully other moms too. They'll cut you down because they have some type of agenda, or because they don't like your kid, or because they're just awful people. But even though this experience opened my eyes to mom bullying, I know that I need to continue to be that mom who will give out her phone number to someone who needs a little bit of help, because that's the only thing that’s going to put an end to bad parental behavior.