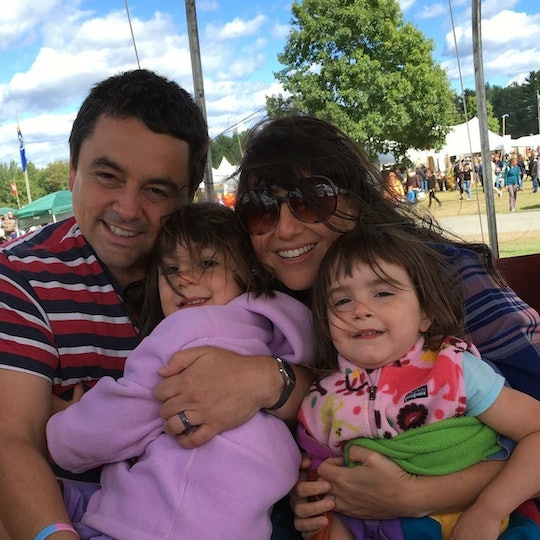 My Transgender Kid Makes Me A Better Parent

Early in my first pregnancy, before I had an ultrasound, I had a vivid dream, though it was more like a vision. In my vision, I saw two antique, white dresses hanging on a clothesline, awash in soft sunlight. The light teased in through an adjacent window, gently illuminating the dresses in an otherwise dark room. I woke up convinced I was pregnant with twin girls, but I later learned that I was carrying only one baby, who was unmistakably male.

When I found out my child's sex, I was thrilled. I wanted to give the world the gift of a good man, and I couldn’t wait to meet this mythical mama’s boy. Yet I remained haunted by the image of those two white dresses. I had no idea how prescient my vision was, because a few years after I had my second child, a girl, my firstborn told us he wasn’t a boy at all, but a transgender girl named Violet. I was suddenly a mother of two daughters.

As a toddler, Violet fulfilled many of the narrow stereotypes we associate with boys. Violet was obsessed with construction vehicles and The Incredible Hulk, and she displayed an aptitude for engineering toys. We once offered Violet a doll, a little cloth boy named Lucas. Lucas swiftly took residence at the bottom of the toy basket, yielding to a Bob the Builder playset and pirate Legos.

But around the age of 2, Violet also became enamored with dresses and started begging for me to buy her one. I would layer that dress on top of dinosaur T-shirts and cargo pants, assuming it was a costume. Blinded by my then-limited understanding of gender, I thought I just had a boy who liked to dress up.

It was the very first time I looked at my son’s face and saw my daughter.

Once, around the age of 4, during a playdate with two girls, Violet emerged from a friend’s bedroom wearing nothing but a shiny blue mermaid tail. “What a spectacular merman you are!” I smiled. “Mermaid!” was the angry reply. “I am NOT a merman!”

In retrospect, it was a seminal moment. It was the very first time I looked at my son’s face and saw my daughter. But at the time, I only saw a frustrated little boy with a formidable imagination, adamant about the characters he wanted to play.

A few months later, we were out for a family stroll on the playground. It was a bright and unseasonably warm day in early spring. It was a Sunday, and I distinctly remember the exuberant feeling as I stepped out onto the sun-warmed driveway, wearing flip-flops for the first time in about eight months. As we approached the sidewalk, Violet stopped, turned to my younger daughter, bent down to lock in eye contact, and said, very clearly, “I’m not your brother, I’m your sister. Mommy has two daughters now, and it’s not your choice, it’s just who I am.” And just like that, she stood up and nonchalantly skipped onto the sidewalk.

The real yeoman’s work of motherhood isn’t in the daily grind of caretaking, or even in teaching our children how to live in the world. It’s about letting go of our expectations and listening to what they can teach us when we bend down to listen, and letting them shape us into better people in the process.

To an extent, I’d known it was coming ever since she pointed at the sparkly Little Mermaid bathing suit in the girl's section at Target and gasped, "mama, I want that one!" (I later found out that one of the indicators of having a transgender child is the desire to wear swimsuits of the opposite sex.) But nothing prepared me for that sucker punch of a moment, when I knew for sure that the little boy I thought I knew had never really been there all along. There I was, thinking freedom came in the form of summer footwear, but for my 4-and-a-half year-old child, liberation meant mustering the immeasurable courage to tell her family her deepest inner truth: She may have been assigned male at birth, but deep inside her heart and soul, she is unmistakably a girl.

While many pre-school aged children will experiment with varying expressions of gender, Violet has been insistent about her identity for more than a year — an indication, according to psychologists, doctors, and scientific researchers, that this is going to stick. I have also spoken with pediatricians, people from trans youth advocacy organizations, and a psychiatrist who specializes in treating trans youth who echoed the same sentiment. Mounting scientific evidence tells us that although many people associate gender with one’s genitals, gender identity is actually formed in the brain from birth. Being transgender is not a choice, nor is it a mental disorder. It is simply a variation of the human condition, and it has been accepted and even revered in some cultures for thousands of years.

From the moment our children are born, we become obsessed with our baby’s genitals. We believe our child’s biological sex will determine our experience as a mother or father, and tell a story about who our child will ultimately become.

Of course, this variation throws a wrench into our conventional understanding of gender, as well as the parental impulse to use gender as a roadmap for planning our nursery colors and our dreams for the future. From the moment our children are born, we become obsessed with our baby’s genitals. We believe our child’s biological sex will determine our experience as a mother or father, and tell a story about who our child will ultimately become.

But after my child came out as trans, I realized there is something unnerving about our obsession with this. It’s as though wrapping our unborn children in a vision of pink or blue can somehow predict the natural order of their lives. But it can't. Nothing can.

Violet didn’t have one specific coming-out moment — it was basically a series of small events. There was the moment that she begged for the girl's bathing suit in Target and we ended up coming home with an entire girls' wardrobe. And there was the moment shortly after that, when she told us that when school got out for summer, she would begin living as a girl.

When Violet began to live life as a girl, she changed her hair, her wardrobe, her name, and her pronouns. But something else changed too. She began to hug me more tightly, and more often. Sometimes, as I kissed her goodnight, she would thank me for letting her be herself. My five-year-old was literally thanking me for letting her be the person she knew herself to be.

I know now that when my daughter stared into my eyes to thank me, she wasn’t just expressing her gratitude for getting to shop in the girls’ section at Target. She was thanking me for letting her live.

I remember a time, before she told us who she really was, when Violet became consumed with death. She would ask me every night about gruesome acts of violence, and whether they would hurt if she were dead. Could a tiger maul you and you wouldn’t feel the pain if you were dead? Could you get squished by a bus?

When I started doing research and calling support groups, I learned that 40 percent of all transgender youth attempt suicide at some point in their lives, but when these children are supported and affirmed, that rate drops dramatically. Violet's obsession with the macabre may have been typical for a 5-year old, but given what I now knew about the risks for transgender youth, her constant talk about death was unsettling. I know now that when my daughter stared into my eyes to thank me, she wasn’t just expressing her gratitude for getting to shop in the girls’ section at Target. She was thanking me for letting her live.

The real yeoman’s work of motherhood isn’t in the daily grind of caretaking, or even in teaching our children how to live in the world. It’s about letting go of our expectations and listening to what they can teach us when we bend down to listen, and letting them shape us into better people in the process.

This spring, my brother got married. His wonderful wife embraced both of my daughters as flower girls in the wedding. When the girls’ dresses arrived, I held them up in my kitchen. Light streamed in through the windows, illuminating two identical antique-white dresses. It was the vision from my pregnancy dream five years before.

A mother’s intuition is a formidable thing. Sometimes, it just takes a little patience for the story to unfold. Mothers-to-be, get your ultrasounds, take your pregnancy quizzes, and dream about the future. But remember, your child’s story may take longer than 40 weeks to unfold, and I hope when it does, you’ll be ready to listen.

More Like This
A Parent’s Guide To Stomach Pain In Kids
101 Would You Rather Questions For Kids
Winter Travel Tips For Families
Tips to Beat Jet Lag, For You & Your Kids
What Parents Are Talking About — Delivered Straight To Your Inbox