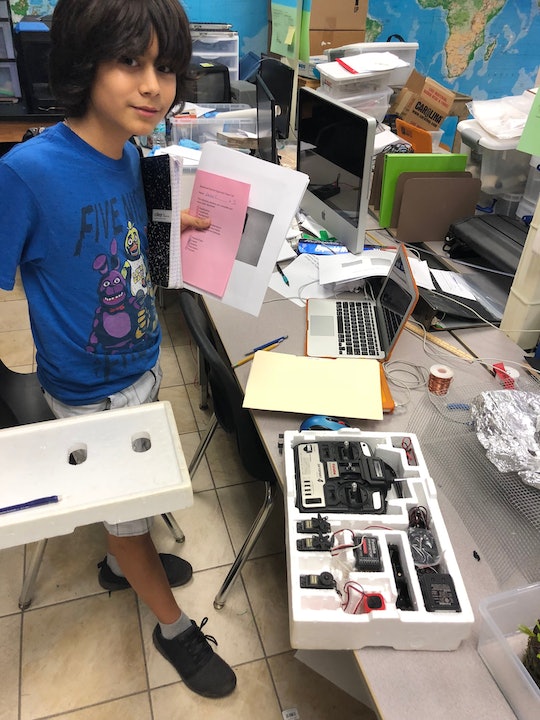 I Have ADHD & This Is What I Want From My School

As early as preschool, my son Lucas stood out from his peers. Where other kids his age sat quietly and listened as the teacher read a story, Lucas often stood and roamed the classroom, attracted by the bright toys arranged around the room. Where other kids sang and mimicked the teacher’s hand movements during the holiday recital, Lucas spun and jumped in the back row. Where other kids lay still on their mat at nap time until they drifted off to sleep, Lucas needed the teacher to sit alongside him and pat his back until his little legs finally stopped kicking and he joined the rest of class in dreamland.

Lucas is 13 now, a childhood away from those frustrating early years when we knew something was going on but hadn’t yet received his ADHD diagnosis. A lot has changed since then. In the fall, Lucas will enter the eighth grade at one of the highest-rated science middle schools in our state. His seventh-grade report card was mostly “A”s; an incredible achievement. It can be incredibly difficult for kids who have ADHD to navigate traditional school.

As Lucas’s mother, I’ve logged countless hours studying ADHD, trying to be as knowledgeable as I could so I could advocate for my child as he tried to adapt to a world that expects children to sit still and pay attention and yet teems with bright, noisy distractions. But now that Lucas is a teenager, he mostly advocates for himself. He understands his own mind and knows what he needs to do to manage his ADHD so that he can succeed academically and socially. Below, Lucas has shared thoughts on his experience as a kid living with ADHD, and as a student about to commence the eighth grade. As told to his mother, Kristen Mae.

On feeling “different” from other kids:

There was a time last year when I hated having ADHD because I would always forget things (that I didn’t enjoy) once my meds had worn off. I would have papers due and have to scramble to finish them when I finally remembered them. It was very stressful.

On the school activities that are least inclusive:

It makes me happy that I have ADHD in the sense that I can completely envelop myself in things that [I] love with hyperfocus. For example: drawing, reading, gaming, et cetera. I find that my ADHD helps me notice details that other people don’t, and it also gives me a lot more energy than others (hence the “H” for hyper). I often find myself awake when all others are asleep, whether because I can’t keep wondering about something or because I’m restless for something to happen the next day that I just can’t get out of my head. I’m also known around my school for having lots of explosive energy.

When I’m sad about having ADHD, it’s usually about school. Schools that are designed for normal kids aren't easy for those of us with ADHD because we find it hard to keep attention on anything other than hands-on or thinking activities.

For example, there is an online learning program called Quizlet. Spoiler: it’s terrible for ADHD students. Why? Because it’s repetition. It’s the same thing over and over, sometimes 200 times, and we just get bored out of our minds because usually we have to do these 200 questions four to six times, until we’ve completed the lesson. So that’s over 1,000 of the same thing, nonstop, for the two hours it usually takes to complete these lessons. To be fair, Quizlet is effective, but I believe there are better ways to make learning fun and interactive instead of only using repetition.

I always love it when I’m doing something I enjoy because I can hyperfocus.

On the moments ADHD itself bothers him:

I hate my ADHD whenever I have a paper to write, whether I get bored out of my mind while writing it or forget about it completely. It’s always a big struggle for me to write papers. I do know that applies to all of us though, not only those with ADHD.

On being happy you have ADHD:

I always love it when I’m doing something I enjoy because I can hyperfocus. This allows me to completely envelop myself in something I love and only that thing. There have been times when I was reading or playing a game and somebody in the next room yelled for me and I didn’t even notice them because I was so concentrated on what I was doing. Like right now as I type, I’m in a low state of hyperfocus. I am able to focus for long amounts of time on something I enjoy.

Taking meds helps my grades but makes me very sensitive to headaches because it dehydrates me. I don't believe that it has an impact on me socially though.

I would focus the decor on the front of the room so ADHD kids have something to look at and put their attention to when the teacher is, instead of maybe turning around in their seat and looking at a kitten poster saying “Hang on!”

On the ideal classroom:

I wouldn’t decorate the classroom too much. I would focus the decor on the front of the room so ADHD kids have something to look at and put their attention to where the teacher is, instead of maybe turning around in their seat and looking at a kitten poster saying “Hang on!” in the back of the room. Second, I would have as much hands-on and thinking activities as possible in the class. I find that when I’m doing something that requires attention to my hands or a manipulatable object in front of me, it’s much easier to focus.

On what people get wrong about the condition:

They don’t understand how it’s possible to not be mentaly capable of focusing for extended amounts of time, so they resort to things like yelling, or even sometimes beating to get someone to try to focus. However, this will never work, because you cannot change the programing of someone’s brain with punishments just like you can’t beat a week-old baby into speaking. Also, they sometimes think that we can’t focus on anything at all. This is not true. We have something called hyperfocus, where when we’re doing something we love, we get extremely absorbed in it to the point that we hardly notice the outside world.

On a parent’s adjustment to an ADHD child:

Sometimes early on when parents are learning how to cope with an ADHD child it may be hard and confusing. Like when their kid subconsciously forgets something important. For example, I hate essays, but if I need to write one, my brain would rather throw away that important info and keep the fun stuff like “We’re going out to eat tonight!”

Sometimes I will get into arguments with my parents about how I just can’t keep forgetting stuff. Having ADHD would never affect me and my sister, Mari. Luckily, I have the best sister in the world and I love her and she loves me no matter what.