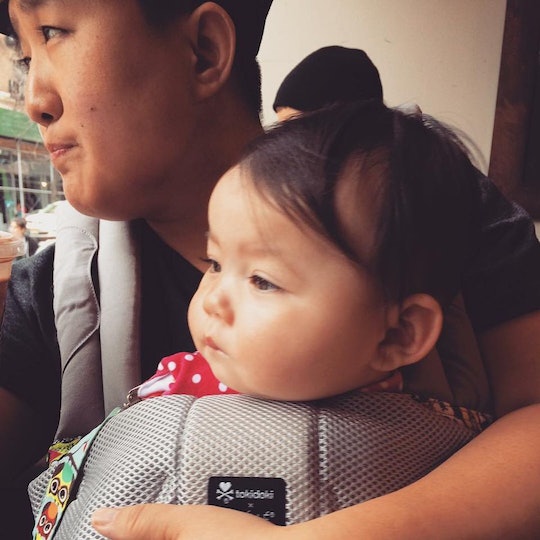 I Have Crohn's Disease & This Is How It Affects My Parenting

I have Crohn's disease. It's not something I'm embarrassed to talk about, but it's not something I like to put out there because, frankly, once I mention that I have Crohn's disease to people who have a vague notion as to what it is, I'm pretty sure all they can think about for at least a while afterward is the idea of me pooping. Sure, everyone does it, but those of us with Crohn's tend to do it a lot more, like plan-our-day-around-bathroom-accessibility a lot more or like build-an-extra-hour-into-our-schedules-to-accommodate-it a lot more. As you can imagine, this doesn't make us a popular disease, and we're often confused with our similarly bowel-distraught, equally sexy cousin, IBS (irritable bowel syndrome). But, whereas IBS is technically a "functional disorder" and doesn't cause damage to the bowel, Crohn's is an IBD (irritable bowel disease), and as such is an actual disease and far more serious.

I was only diagnosed with Crohn's five years ago. One day I was perfectly healthy, and then after a random bout of unrelated Bell's Palsy that preceded a series of symptoms to stump nine specialists and put me through every test imaginable, I couldn't walk. My knees locked, or, at least, that's how it felt. Within a few days of that my hands furled, rendering them useless as well. I'd developed arthritis when I'd never before in my life experienced any joint pain. Because specialists kept thinking the Bell's Palsy had been a trigger instead of a random occurrence, I became my own episode of House, and just like the show, it wasn't Lupus.

To help ease my incredible pain and other symptoms (like migraines, nausea, vomiting, and the inability to keep things down), I was put on massive doses of Prednisone and even Methotrexate, an immunosuppressant taken for inflammation. While both drugs helped, the doctors still didn't know what would cause an otherwise healthy adult to develop crippling arthritis entirely without warning. Eventually my rheumatologist happened to run a blood test for an inflammation marker typically associated with Crohn's. When it came back positive, he sent me to a gastroenterologist, and after a colonoscopy and upper endoscopy, I was diagnosed with Crohn's.

My gastroenterologist believes that I've had Crohn's since childhood. My parents just always thought I had a "nervous stomach," never thinking to have me further checked.

Crohn's Disease is a very complicated disease that can "affect any part of the GI tract from the mouth to the anus" (I think that's our t-shirt slogan), according to the Crohn's and Colitis Foundation of America. Since I've lived almost all of my life with stomach issues, I didn't think even think to mention it to any of the doctors I had seen. Had my rheumatologist not thought to test for it, I would probably still be suffering.

Relief came relatively quickly in both the form of a very expensive intravenously administered drug called Remicade and because finally, I had a diagnosis. The scariest part of everything was not knowing the what or why of what was suddenly plaguing my body and only dealing with the how. Even as I write this, I'm tearing up remembering the days and nights of insurmountable pain, of being inexplicably robbed of the ability to walk and use my hands, and the simultaneous fear and strength exhibited by my wife who took me to every single specialist's appointment and never let me face a moment of this terrifying time on my own.

My gastroenterologist believes that I've had Crohn's since childhood. My parents just always thought I had a "nervous stomach," never thinking to have me further checked. I still remember all the times my mom would bring me orange juice in the bathroom, hoping to help move things along. I distinctly remember the feeling of the cool porcelain bathroom counter on my face as I laid against it, tired and hurting from either going or not being able to. Still, I've considered myself incredibly lucky, not only because I was finally diagnosed but also because I am able to afford the Remicade my body so desperately needs.

The greatest thing my disease took from me was my dream of being a biological parent.

No chronic disease comes without some cost, though. In the early days following my diagnosis, I didn't know how to explain my disease and its resulting exhaustion to others. Then, a friend told me about the Spoon Theory. Written by Christine Miserandino, a writer who has been battling Lupus (sometimes, House, it is Lupus) for most of her life, it's a metaphor to help those who aren't sick understand how someone with chronic illness can look OK but be anything but. Christine wanted to give a friend a visual to understand her plight so she handed her a bunch of spoons. She explained that people who are healthy have a limitless amount of spoons, but people who are sick are only given a limited number every day and every day they have to figure out how to spend their finite number of spoons on regular activities healthy people often taken for granted.

While the Spoon Theory offered a lot of comfort and explanation at the time, now, as a parent, for as simple and brilliant as the spoon metaphor is, it cannot be understood by my 11-month-old daughter. She doesn't understand why on Saturday mornings, after having taken Methotrexate the night before, I'm not up with her and her mama because even after five years, it still makes me drowsy. Methotrexate belongs to a group of medicines known to treat cancer, but since I take a significantly smaller dosage than cancer patients it doesn't have remotely the same effect. Still, it's a very serious drug — one which the National Institutes of Health says "may cause very serious, life-threatening side effects" — and even after being on it for so long, it's still a bit unsettling for me every Friday when I ingest the nine pills. There have been many very early weekend mornings where in my sleep haze I can feel my daughter's tiny hands on my face, trying to open my eyes, or, worse, hear her trying to get my attention. I can't explain to her why, if I am awake but not present, it's usually because I'm physically in the bathroom.

I take every day one day at a time because I'm too afraid to bank on the next day or the next week or the next month.

I worry that the earliest memory my daughter will have of me is on the toilet. And I almost always feel guilty about the slack my wife has to pick up because any number of my various Crohn's symptoms are flaring. Not to mention the fact that this year alone I've had more colds and bronchial infections than I can count, thanks to the one-two punch of the germs my little one brings home from daycare and the fact that Remicade lowers my ability to fight infection. For all of these reasons, I find I often just don't have the energy to do everything that needs to be done, and as we all know, there is never a shortage of things to do when you have a baby. There are some days where getting us ready and out of the house on time essentially uses up most of my energy, leaving me with precious little reserve to handle my workload, household chores, and simply being present for my wife and daughter. Those days are the hardest because they're the days I'd give anything to have a few more spoons — because my family deserves so much more.

My diagnosis irrevocably changed me. I no longer take things for granted because that's what happens when you lose the ability to walk completely out of the blue or when you find yourself needing your wife to cut up your Thanksgiving turkey because you can't hold a fork and knife. When I'm feeling lazy, I try to remember how good it felt the day I was finally able to once again walk a city block without limping, stopping, or crying. I take every day one day at a time because I'm too afraid to bank on the next day or the next week or the next month. For this reason, I buy insurance for everything: plane tickets, show tickets, etc. I can actually feel myself get anxious when too many things get piled on the calendar. I have to suppress the but what if? scenarios that run on repeat in my head.

My wife carried our daughter, but that wasn't the original plan. We had wanted me to carry first as I'm slightly older than she is, and I had long dreamed of doing so. But, in the end, the greatest thing my disease took from me was my dream of being a biological parent. The medication I'm still on precludes me from being able to safely do so, and while it took me some time to come to terms with my body's abject failure, when I look at our baby girl it's clear that my reality is greater than any of my wildest dreams.

I know that no matter what the future holds for me and my health, no matter what I find myself capable or incapable of down the line, I'm no longer as scared as I once was about the unknown. My disease can get much uglier than it's already been: bowel obstructions, fistulas, and an increased risk for colon cancer are known complications of Crohn's, according to the Mayo Clinic. But as this disease has already taught me, I'm capable of handling the unknown. My hope is that I can teach my daughter this resilience as well. I want to show her that laughter really is the best medicine because if you can't laugh about poop, are you really living your best life? I still don't take a single day for granted, but now that my days are filled with my family, there isn't a single moment that I want to.